YouTube’s search algorithm update appears to favor videos from mainstream outlets over those from independent YouTubers, according to a report by Information Liberation, which studied the placement of an interview with Ann Coulter in the site’s search results.

A recent report from InformationLiberation.com appears to show that even when searching for a particular YouTube video by it’s exact title, similarly themed videos from mainstream sources will be ranked above the titled video due to YouTube’s new search algorithm. The video used to test this was a clip of conservative commentator Ann Coulter’s recent appearance on C-Span which was titled “How Trump Should Deal With Cohen & Manafort – Ann Coulter.”

When this exact title was placed into YouTube’s search function, 22 other videos were listed ahead of the C-Span clip. The other videos relating to Cohen and Manafort and were published by the likes of CBS, MSNBC, Fox, CNN, the Washington Post and multiple other mainstream outlets. The screenshot below from InformationLiberation.com shows just how far a YouTube viewer would have to scroll down to find the C-Span clip.

In comparison to YouTube, Google Videos — which has yet to receive an updated algorithm to rank “trusted sources” higher in search results — appears to show the C-Span clip of Coulter first in search rankings while the three other videos suggested are similar videos from independent YouTuber’s discussing the issues raised by Coulter. 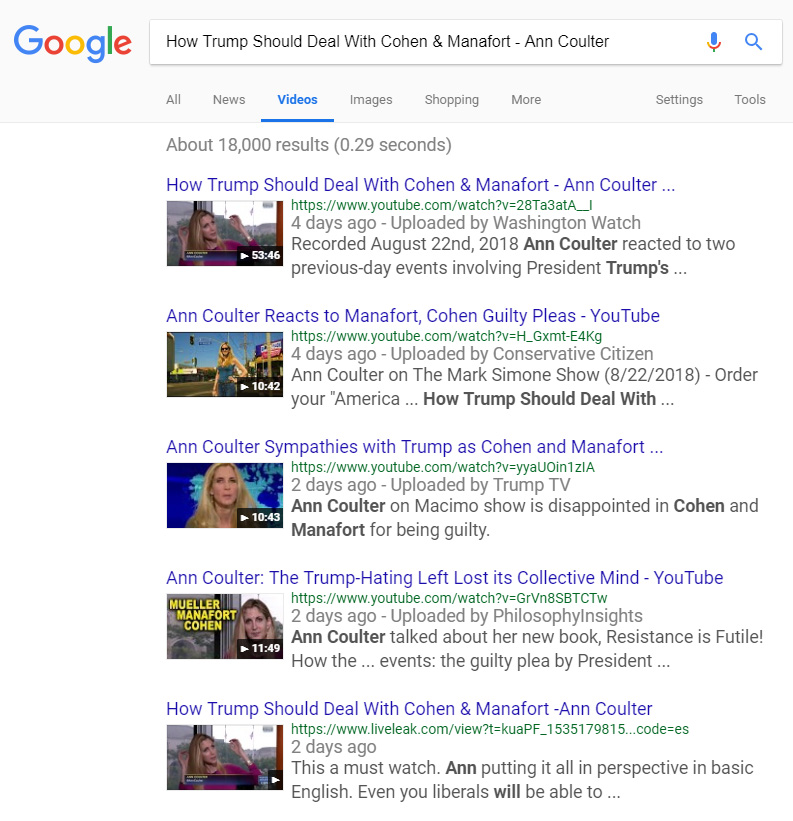 This change in YouTube’s algorithm would appear to back up reports from Breitbart’s “Rebels of Google” interview series in which former and current employees stated that there were active efforts within Google and specifically YouTube to demote conservative content. Breitbart’s Allum Bokhari wrote in his article titled “Former Google Employee: ‘There Are Efforts to Demote Anything Non-PC from Search Results'”

According to Breitbart’s anonymous source, some Ad Sales employees are “openly encouraging Adwords customers to pull their ads from Breitbart and Rebel Media.”

Emmett concurs with our source. “A number of friends have privately confirmed this to me. I know there are efforts to demote anything non-PC, anti-Communist and anti-Islamic terror from search results. To what extent that has been successful, I don’t know.”

“I have read internal mailing list e-mail from SJWs absolutely incensed that there’d be, say, a Sargon of Akkad video appearing as a video related to one of their favorite SJW vloggers. This is what happens when you have unbiased algorithms, which at the time, was true. I don’t have to tell you that, in that e-mail, the SJW was quite literally asking that the ‘related videos’ function be perverted so that such a thing would stop happening.”

In the very clip of Coulter referenced in this article, the conservative author discusses the issue of censorship by tech companies, saying: “We need to apply the First Amendment to social media companies like Twitter, Facebook, and Google, because it is a public square, and there is precedent for that and it’s gotta be done, because this is really terrifying, and talk about chilling speech when they’re just throwing people off right and left.”