Citing his loyalty to the BDS movement, professor John Cheney-Lippold at the University of Michigan refused to write a recommendation letter for a student planning to study in Israel.

Professor John Cheney-Lippold of the University of Michigan turned heads this week when he refused to write a letter of recommendation for a student planning to study abroad in Israel. Cheney-Lippold cited his allegiance to the Boycott, Divestment, and Sanctions movement, which aims to promote various forms of boycott against Israel.

Cheney-Lippold notified the student in an email in which he cited his department’s decision to collectively participate in various BDS protest efforts. “I am very sorry, but I only scanned your first email a couple weeks ago and missed out on a key detail,” he wrote. “As you may know, many university departments have pledged an academic boycott against Israel in support of Palestinians living in Palestine. This boycott includes writing letters of recommendation for students planning to study there.” 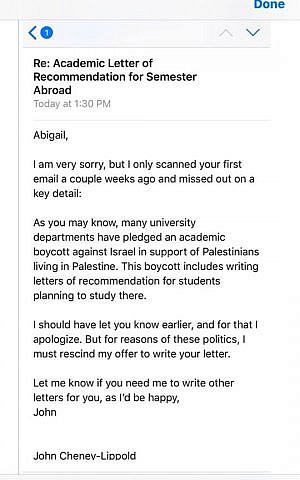 Last year, the student government at the University of Michigan passed a pro-BDS movement resolution. Ultimately, the university’s board of regents refused to sign onto the resolution.

In a statement, the board of regents said that the BDS movement offends the values of the University of Michigan. “Our university has long been a community that seeks to study and improve the human condition through our research and scholarship,” the statement read. “We work together to better understand the most complex challenges we face on campus and beyond. We do this work through active engagement in the world around us. To boycott, divest or sanction Israel offends these bedrock values of our great university.”

Jonathan Greenblatt, the CEO of the Anti-Defamation League, wrote in a tweet on Monday that the student was the victim of “political bias.”

“Not acceptable,” Greenblatt tweeted. “A student striving to learn and further their education should never be a victim of political bias. The university needs to publicly clarify it opposes the academic boycott of Israel.”

Not acceptable. A student striving to learn and further their education should never be a victim of political bias. The University needs to publicly clarify it opposes the academic boycott of Israel. https://t.co/eyc2e4XbBT