Were Facebook’s fact-checkers asleep at the wheel, or was it just politics as usual?

Facebook’s nine official fact-checking partners, including such allegedly prestigious outlets as the Associated Press and Reuters, collectively failed to conduct a single fact check on an erroneous post from the Huffington Post, which repeated the misleading claim that President Donald Trump has a “stake” in a hydroxychloroquine drugmaker. As explained by Breitbart News Economics Editor John Carney, Trump’s family trust has a small investment in a mutual fund that owns shares of drugmaker Sanofi. How small of an investment? $1,485 at the maximum, but possibly as low as $99.10.

The Huffington Post also falsely claimed that there is a “lack of medical evidence” supporting the use of hydroxychloroquine as a treatment against the coronavirus. In actuality, a series of physicians have publicly stated that they witnessed Chinese virus patients recover after taking the anti-malaria treatment. 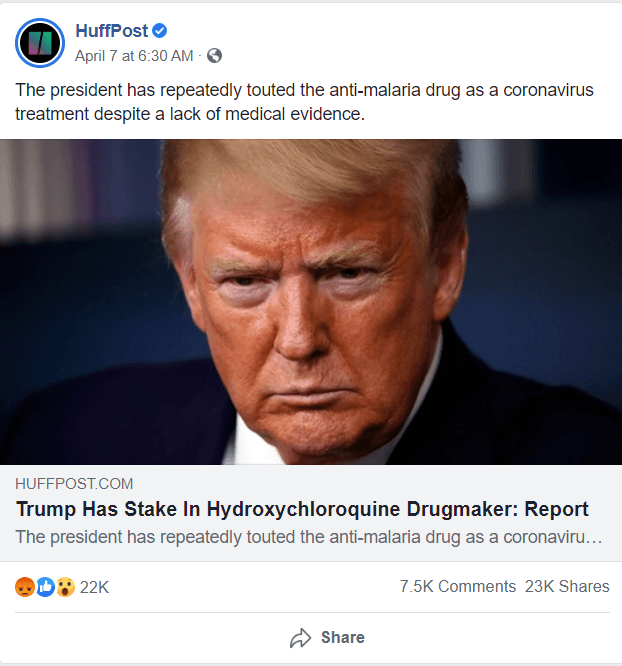 HuffPo’s post has been live on Facebook for more than two days and has had 2 million interactions despite containing these factual inaccuracies. So far, Facebook has failed to flag the post as erroneous or to demote it, thereby allowing the article to be cross-posted by Yahoo News and amplifying its reach.

Breitbart News reached out to all nine of Facebook’s official fact-checking partners. As of Friday afternoon, only two had responded. A Politifact spokesperson replied: “Your email is the first question or notice we’ve received about the Huffington Post claim. We will consider it along with all the other requests we get.”

Lead Stories, another official Facebook fact-checker, said that they would “immediately” look into the matter.

Facebook gives its fact-checking partners the freedom to pick and choose user content that they review for accuracy. “All fact-checking organizations have the total editorial independence on their selections,” said Baybars Örsek, director of Poynter’s International Fact-Checking Network, which oversees Facebook’s network of fact-checkers, in a statement to Breitbart.

Facebook’s fact-checking program has faced criticism that it is unfairly weighted against conservative and right-of-center points of view. Of its nine U.S. fact-checking partners, only one is a conservative outlet — the Daily Caller’s Check Your Fact.

In recent weeks, hydroxychloroquine has become a contentious political football after President Trump repeatedly expressed his optimism that it could be an effective treatment against the coronavirus. “We’re just hearing really positive stories, and we’re continuing to collect the data,” he said at a White House press conference.

Among the mounting medical evidence (albeit not proof) is Michigan State Rep. Karen Whitsett, a Detroit Democrat, who had Wuhan coronavirus and said she recovered after taking hydroxychloroquine and an antibiotic. Other testimonies include doctors in Los Angeles, Hawaii, and Denver.

The FDA recently issued an Emergency Use Authorization for the drug that will allow patients suffering from the Chinese virus to take advantage of the treatment.  On Monday, the American Thoracic Society issued guidelines that suggest COVID-19 patients with pneumonia receive the anti-malaria drug.

Some media outlets have sought to portray the president’s remarks as irresponsible, with The Washington Post accusing him of giving “false hope” and selling the public “snake oil.”

The AP and Reuters — which are both official Facebook fact-checkers — have run stories casting doubt on the efficacy of hydroxychloroquine as a potential Wuhan coronavirus treatment. Their role as fact-checkers has raised conflict-of-interest concerns in the past because they are allowed to fact check articles from competing news organizations.

In 2018, the AP ran a fact-check of a Breitbart News story, labeling it “false” when in fact the article truthfully reported on an illegal alien being appointed to a state office. As a result, Facebook directed users away from Breitbart and to a similar story from the AP. After Breitbart lodged a complaint, the AP rescinded its “false” label, but only after a few days.

Neither the AP nor Reuters responded to Breitbart News’ requests for comment.