Twitter went to extraordinary lengths to slow down retweets of a tweet by President Donald Trump earlier today, the latest in a long line of acts of censorship against the President and his administration that has escalated in recent weeks. Taking its censorship of Trump to new levels, the platform requires users to click through a warning message, then look past several other warning labels to follow its recently changed quote retweet process.

“Big problems and discrepancies with Mail In Ballots all over the USA,” tweeted Trump. “Must have final total on November 3rd.”

Big problems and discrepancies with Mail In Ballots all over the USA. Must have final total on November 3rd.

The platform has gone a step further than the previous times it censored the President, on this occasion preventing users from retweeting it directly, instead forcing them to “quote tweet” it by adding their own message — and only after making users click through three screens in the process. The removal of direct retweets during the election period is an attempt to add “friction” to the user experience, a way to slow down virality. 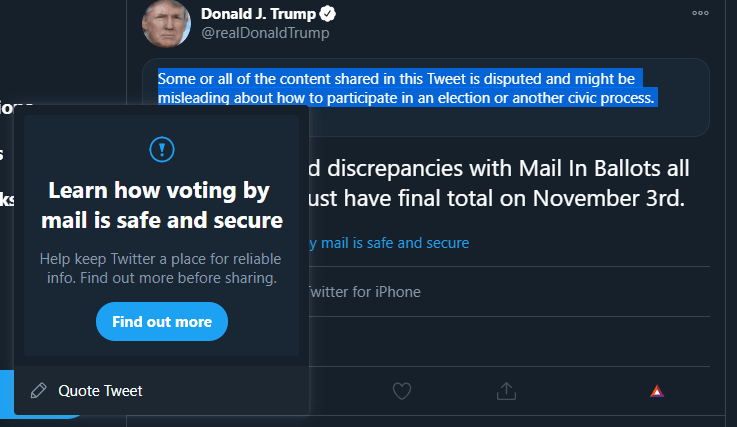 The censoring of the President comes while the New York Post, the country’s third-oldest newspaper, remains locked out of its Twitter account for publishing a bombshell story exposing links between the Biden family and the Ukrainian energy giant Burisma.

Twitter has also censored tweets from President Trump on numerous occasions, including:

Twitter is now systematically preventing messages from the President and members of his administration and campaign staff from reaching the American public, while it also continues to suppress a newspaper, the New York Post, over a story that damaged Joe Biden.

Allum Bokhari is the senior technology correspondent at Breitbart News. His book, #DELETED: Big Tech’s Battle to Erase the Trump Movement and Steal The Election, which contains exclusive interviews with sources inside Google, Facebook, and other tech companies, is currently available for purchase.