Florida Gov.Ron DeSantis (R) has directed the Florida Secretary of State, Laurel M. Lee, to investigate Facebook for election interference, calling Facebook’s alleged actions “an affront to the basic principles of our republic.”

This follows a report that Facebook exempted certain “elite” users from its terms of service, including high-profile politicians and incumbent government officials. 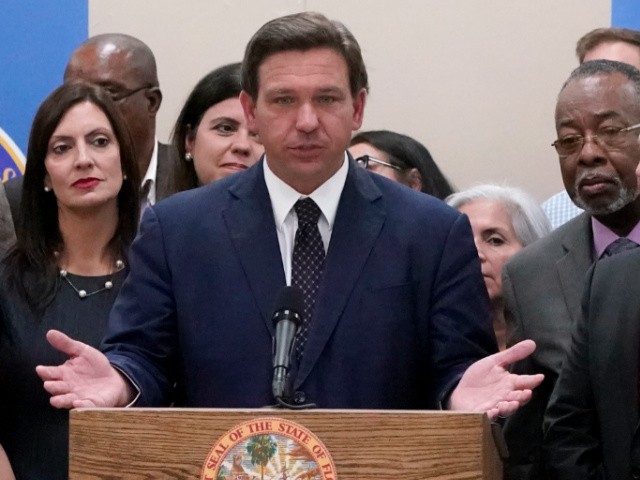 Florida Gov. Ron DeSantis, center, speaks before signing a bill that increases eligibility to attend private schools at public expense, during a ceremony at St. John the Apostle School, Tuesday, May 11, 2021, in Hialeah, Fla. The bill is projected to allow more than 60,000 previously ineligible students to seek vouchers. The cost to the state will be an estimated $200 million. (AP Photo/Wilfredo Lee)

Facebook maintains a whitelist of elite users that are subject to less stringent rules than others using the platform, according to leaked materials provided to the Wall Street Journal.

Despite the company claiming in public that its rules apply equally to all users, the Journal reports that a set of privileged users including journalists, politicians, and celebrities are allowed to post rule-violating material “pending Facebook employee reviews that never come,” while others are “whitelisted” — immune from Facebook enforcement actions altogether.

The program is reportedly known internally as Crosscheck, or “XCheck.” According to the documents obtained by the Journal, it includes at least 5.8 million users, including “most government officials” — but, frequently, not the challengers to their incumbent status.

“It’s no secret that Big Tech censors have long enforced their own rules inconsistently,” said Gov. DeSantis in a statement. “If this new report is true, Facebook has violated Florida law to put its thumb on the scale of numerous state and local races.”

“That is why I am directing Secretary Lee to use all legal means to uncover violations of Florida’s election laws. The thought of Facebook clandestinely manipulating elections is an affront to the basic principles of our republic. We the people have the right to choose our representatives, whether or not Silicon Valley approves.”