The Robinhood stock trading platform recently revealed that it was victim to a hack that exposed the personal details of seven million customers — but claims that no one lost any money as a result.

Vice News reports that the online trading platform Robinhood was hacked last week after someone socially engineered a customer service representative in order to gain access to the email addresses of more than five million Robinhood customers. The hacker also obtained the full names of a further 2 million customers and other data on a smaller group of individuals. 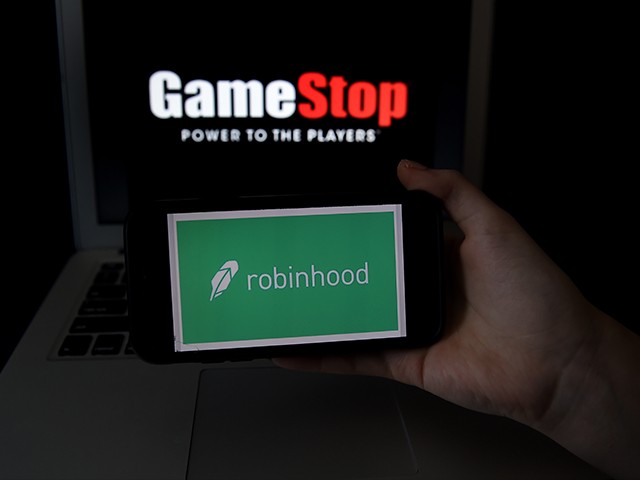 This photo illustration shows the logos of video grame retail store GameStop and trading application Robinhood on a computer and on a mobile phone in Arlington, Virginia on January 28, 2021. (Photo by OLIVIER DOULIERY/AFP via Getty Images)

In a blog post published Monday, Robinhood revealed the full extent of the attack and claimed that the hacker attempted to extort the trading platform.

“The unauthorized party socially engineered a customer support employee by phone and obtained access to certain customer support systems,” Robinhood wrote in the blog post. “At this time, we understand that the unauthorized party obtained a list of email addresses for approximately five million people, and full names for a different group of approximately two million people.”

The company added: “We also believe that for a more limited number of people—approximately 310 in total—additional personal information, including name, date of birth, and zip code, was exposed, with a subset of approximately 10 customers having more extensive account details revealed. We are in the process of making appropriate disclosures to affected people.”

Robinhood added that the attack was contained and they don’t believe personal info including social security numbers, banks accounts, or debit cards were exposed. This means that no Robinhood customers appeared to have suffered financial loss as a result of the hack.

Robinhood made headlines in January after the company restricted trading on GameStop stock following a huge rally in the stock price. In March it was reported that the Financial Industry Regulatory Authority (FINRA), and the SEC were investigating Robinhood’s options trading platform and how it displays information about options trading and cash positions to its customers.

Robinhood has faced criticism over how it advertises options trading after a 20-year-old man named Alexander Kearns killed himself as he thought he had incurred more than $700,000 in losses on the app. Kearns’ family has filed a wrongful-death lawsuit against Robinhood.