Stanford University published a list of words and phrases deemed “harmful language.” The school plans to eliminate this language from its websites and computer code, and also suggested words and phrases to serve as replacements.

Stanford’s IT department recently launched its “Elimination of Harmful Language Initiative,” which is a “multi-phase, multi-year project to address harmful language in IT at Stanford.” 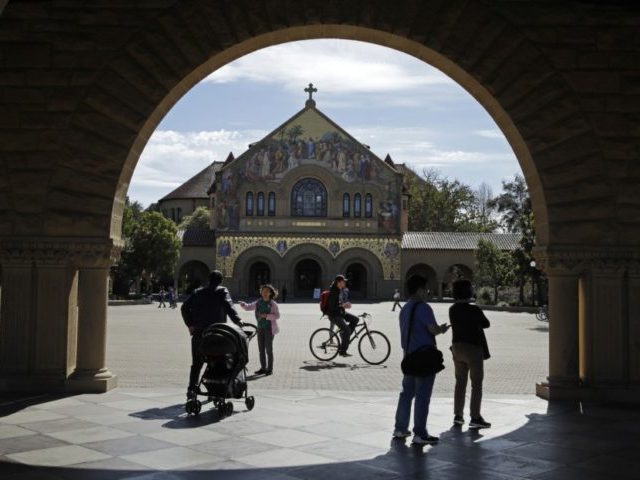 “The goal of the Elimination of Harmful Language Initiative is to eliminate many forms of harmful language, including racist, violent, and biased (e.g., disability bias, ethnic bias, ethnic slurs, gender bias, implicit bias, sexual bias) language in Stanford websites and code,” the guide reads. Of course, the guide is largely made up of perfectly acceptable language used by Americans — for example, it advises readers to say “U.S. citizen” instead of “American” because of how “harmful” that term is.

Before listing the “harmful” words and their replacements, the university issued a trigger warning — but even the term “trigger warning” has been deemed harmful, so the school instead used its replacement: “content warning.”

In the gender-based category, the index says “pronouns” should be used instead of “‘preferred’ pronouns” because the word “preferred” suggests that “non-binary gender identity is a choice and a preference.”

The guide has also deemed the term “ballsy” harmful, because it “attributes personality traits to anatomy.” Instead, the school suggests using the words “bold” or “risk-taker.”

The section also advises against words like “fireman,” “freshman,” and “congresswoman” because the “gender binary language” does not include everyone. Instead, it suggests using “firefighter,” “first-year student,” and “congressperson.”

Moreover, instead of saying “guys” when addressing people, the index suggests using “folks,” “people,” or “everyone,” because using the former “reinforces male-dominated language.”

In the institutionalized racism category, the guide advises against using terms like “black mark,” “black sheep,” and “blackballed,” among others, claiming they “assign negative connotations to the color black, racializing the term.”

The guide also suggests replacing “grandfathered” with “legacy status,” because “this term has its roots in the ‘grandfather clause’ adopted by Southern states to deny voting rights to blacks.”

Amusingly, the guide replaces the term “rule of thumb” with “standard rule,” adding: “Although no written record exists today, this phrase is attributed to an old British law that allowed men to beat their wives with sticks no wider than their thumb.”

The university also suggests eliminating “brave” from its culturally appropriative category, but does not offer a replacement for the word.

“This term perpetuates the stereotype of the ‘noble courageous savage,’ equating the Indigenous male as being less than a man,” the guide laments.