Our objective-unbiased, not-at-all-liberal media are now in two modes: Openly celebrating Obama’s shutdown victory over the GOP and planting seeds of recrimination that they hope will bear fruit through the 2014 elections. Context is important…

There is no question that, from a purely partisan point of view, Obama won. But it is what he won that an objective media would not celebrate. And the media are not only celebrating, they are celebrating in a partisan way as though Obama was 100% right and his cause 100% righteous. Except…

We still have a $17 trillion debt that will now be dismissed; ObamaCare is still victimizing hundreds of thousands among the working poor, and nothing will be done to help them; and now dead is the debt ceiling/continuing resolution trigger that had been a decades-long way of giving Congress negotiating power over the president.

Something that makes our Constitution work so well are those features that roadblock what is known as the “tyranny of the majority” — like the filibuster. Losing the ability, especially under this spend-happy president, to use the debt ceiling/continuing resolution triggers to force spending cuts is going to have long-term ramifications on our country, none of them good.

So, objectively, did Obama win a political victory? Yes.

However, objectively, is Obama’s victory good for the country? No. But the media aren’t even hinting that Obama’s cause might have been anything less than righteous.

Latest updates at the top…

The only time the media worries about “billions” and the “federal government” is when the government has less money. But this is a big narrative the media hopes to ride into the 2014 midterms. The idea of pieces like this one is to blame the GOP for Obama’s lousy economy.

How exactly the shutdown “cost the economy $24 billion” is beyond me, unless the government lit $24 billion on fire over the last 16 days. I certainly understand how that $24 billion didn’t move from one place to another, but how could it not be in the economy somewhere? 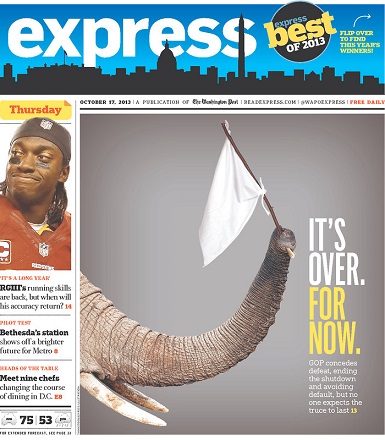 This was the front page of today’s Washington Post, per the Newseum.

As you can see from the Politico screen-cap below, the left-wing Politico was in a celebratory mood last night after Obama won the shutdown showdown. Editor-in-chief John Harris was in an especially good mood. In a near-midnight email to the Politico staff, Harris congratulated everyone for their work and assured them that all of DC is “in awe” of us:

But if we won’t mention specific pieces we will mention a specific team. POLITICO’s congressional reporters and editors have left not just their colleagues but the entire city in awe…of their sourcing, of their expertise on the personalities and process playing out on Capitol Hill, of their keen judgment during the most intense and competitive deadline situations, and of their indefatigable commitment to stay on top of the story.  Very often it was as if we had hidden microphones in the private meetings as lawmakers plotted strategy and argued over options.

1:47 –  Time: Women Are the Only Adults Left in Washington

This is another Narrative coming out of the shutdown; this idea that women saved the day in DC. It is pretty obvious that had this headline read “men” instead of “women,” the result would be all kinds of blowback. But this is all about creating a cult of personality of women around as a way to boost Hillary.

In 2008, Hillary thought the smart move was not to run as a historic candidate (the first woman), only to get her clock cleaned by the historic First Black President. This is not a mistake she is going to make again, and as you can see, the objective, unbiased media is already playing along. 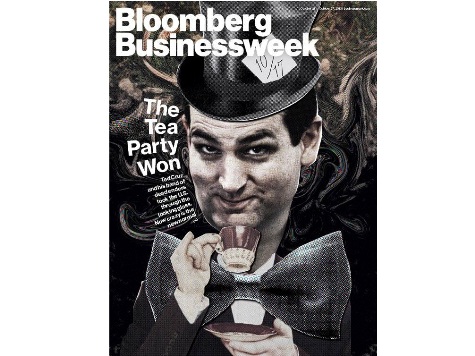 This is a new Narrative cropping up today. Although this same media refuses to report on or even acknowledge the negative effect ObamaCare is having on our economy, in order to save Obama from some 2014 midterm grief, they are now claiming that budget battles, that are as old as the Republic, are partly to blame for Obama’s terrible “recovery.”

Remember, according to the media, nothing that shrinks, cuts, or slows the growth of government is ever good for the economy.

“Republicans never expected to get a fair shake in the Big Three networks’ coverage of the 16-day government shutdown, but the final tally of stories blaming the GOP is stunning: 41 stories blamed Republicans and zero blamed Democrats.”

Within seconds of Obama giving the media their marching orders to push for immigration reform and to pass a farm bill, CNN’s Wolf Blitzer hauled Rep. Michael Burgess (R-TX) on the air to berate him with Obama’s talking points.

Apparently, Blitzer was unaware of the fact that Obama had falsely insinuated that House Republicans were blocking a farm bill. A farm bill passed out of the House in July. Blitzer seemed surprised when Burgess reminded him of this.

The president just took his second victory lap of the shutdown, this time to lecture and scold those in the GOP who dare fail to understand that legalizing 11 million Democrats is a form of “compromise” and “making government work.”

Over at CNN, no one even considered the idea that blocking what you believe to be a bad bill is a form of governing. This is the same CNN that joined in on the media-wide lionizing of Wendy Davis after she BLOCKED popular legislation to restrict late-term abortions in Texas.

Moreover, the same CNN that pretends to believe in bipartisan compromise saw absolutely nothing wrong with the president’s highly partisan speech.

Finally, John King really enjoyed Obama’s shot about how if you want to change things in DC “win an election.” Apparently, John King is unaware of the fact that somewhere around 250 DC Republicans won elections and mandates from their own constituents.

11:20 – Top of the Left-wing Politico This Morning

Sources tell me the entire Politico staffed worked through the night fueled only by the adrenaline of Hope and Change: 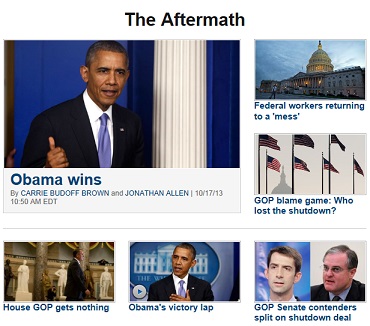 it’s Senator Cory Booker. As if today could get worse for Republicans.

11:14am – Booker’s victory has been pre-ordained for almost a year. But what else should we expect from the journalist who encouraged the stock market to tank in order to hand Obama a shutdown win?

If at the 11th hour you voted against the deal last night, you were voting for the U.S. to default

This of course is ridiculous. As a senator, President Obama voted against raising the debt ceiling–a fact the media never challenged him on in any meaningful way, even as he demagogued against the GOP for standing on his shoulders to do the same.