I’m proud to announce that I have won a major art competition. 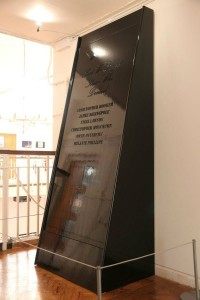 Oh all right. (Modesty, James. Modesty!). I am one of several climate change sceptics to have been celebrated and immortalised in an exciting new, prizewinning art installation at Anglia Ruskin, one of Britain’s largest universities. (h/t Liam Deacon)

It comprises a faux-stone slab (made out of plywood) engraved with my own name and that of five other British climate sceptics – Christopher Booker, Nigel Lawson, Christopher Monckton, Melanie Phillips, Owen Paterson – beneath the legend “Lest We Forget Those Who Denied.” The sculpture has been described as an “oil painting with a difference” because a continuous stream of engine oil drools symbolically over the “deniers'” names, like tragic sea otters after an Exxon spill.

The piece, which won the university’s 2015 Sustainability Art Prize, was the creation of third year fine art student Ian Wolter.

Wolter has explained his meisterwerk thus:

“With this work I envisage a time when the deliberate denial of climate change will be seen as a crime because it hinders progress towards a low carbon future.”

The prize – £250 and a certificate – was presented to him by the head of the university’s art department.

Among those who have praised the work is the director of the university’s Global Sustainability Institute, Dr Aled Jones.

I quite agree and am hugely proud to find myself in the distinguished company of some of Britain’s finest journalists and most brave and outspoken politicians, including a former Chancellor of the Exchequer and the former Secretary of State for the Department of the Environment, Food and Rural Affairs.

Jolly well done, young Ian! And thank you for caring.