Jessica Valenti has – like a few other women over the course of human history – aged. She doesn’t get wolf whistled at, or catcalled anymore. Boo freaking hoo. The self-styled, “seasoned feminist” is no longer getting builders commenting on her bum, or what they’d like to do to it. What a massive travesty. Someone get her a Guardian column.

Oh wait, they did. Here it is. It’s called, “Men rarely catcall me any more. I hate that our culture makes me miss it.” At least it was called that, before the internet pointed out that just over a year ago, Ms. Valenti penned another piece for the Guardian entitled, “The end of hisses, whistles and stares: we need to walk the streets without fear.” 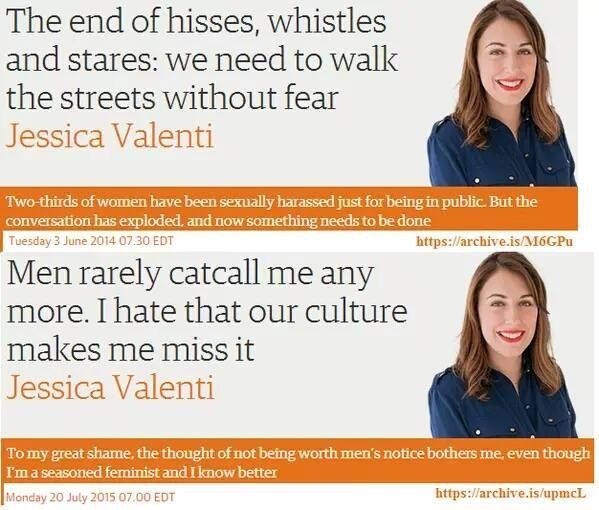 What a difference a year makes…

Oh dear. How embarrassing. Better quickly change the name of yesterday’s article, to something that says that maybe you don’t mind that you’ve aged and become less attractive to the opposite sex, eh, Ms. Valenti? Something like, “One perk of older age? Fewer catcalls.” Yep. That’ll do. Completely revise history. No one will ever know. Right?

Except we do know, because we’re not, like, total fucking morons.

We know that Ms. Valenti doesn’t actually have a ‘engaged’ mode of her brain. And that she just flits from minute to minute, blaming something or the other on the “patriarchy”. And to hell with it if her multiple hypotheses don’t tally, or correlate, or form a cohesive philosophy. That “logic” stuff is just the patriarchy’s way of keeping the women down, right?

Dear Jess even has pictures of her in t-shirts that say bad things about the patriarchy. And her Twitter header image reminds us that she’s a big, strong, tough, independent women who “doesn’t fucking care if you like it”. Oh shit. Someone get the King of all Men. She’s done it. She’s rumbled us. The jig is up. From now on it’s all more equality for women.

Okay, too much sarcasm.

I just cannot get over how someone can so brazenly write an article demanding the end of catcalling, then just 13 months later bemoan the fact that no one catcalls her anymore.

What if every builder has gone out, bought the Guardian, read her article, and taken it completely to heart?

I can see it now. Breakfast with the wife before setting off to work:

“No, just a soy, chai, quinoa, Gazan latte for me”, retorts Dave, the builder. “Listen love… I mean, sorry, Elizabeth… I’ve been having a think. I’ve been a total, card-carrying member of the patriarchy for far too long now. I’m turning over a new leaf. No more catcalls today at work. Oh and when I’m home I want to hear all about your first period. God that must have been traumatic, I’m sorry I didn’t ask sooner.”

This is obviously what happened after Valenti’s article last year, and she should be ashamed that she’s rowing back now, missing the wolf whistles and hissing and staring. I mean after all, if she can convince her husband that her shirt (above) is suitable for the dinner table, then anything’s possible. J/k guys. Her husband is OBVIOUSLY fully supportive of her feminist fashion choices. Just read about it here. I mean, don’t worry about it for a second.

If only she realised how powerful she is. The war’s over. The last battle is won. The only way to stay relevant is to outright contradict yourself.

Well, she’s got that base covered.