The racially-motivated DC Media’s rush to ClarenceThomas Republican presidential frontrunner Ben Carson is starting to crumble under scrutiny. As their respective stories are slowly but surely debunked by New Media, naturally, the DC Media is circling the wagons to hide said Crumbling. Politico’s false West Point story is still being bandied about as actual news by CNN and MSNBC. The same is true with the horrible anti-Carson reporting we saw from The Wall Street Journal and CNN.

For the last 6 days, the very same DC Media that chose to bury and ignore more than 30 inaccuracies in Barack Obama’s biography has, though lies of omission and commission, attempted to disqualify Ben Carson from the presidency based only on conjecture and innuendo.  Carson’s only proven sin is that he’s beating Hillary Clinton in all the polls and that he is a black man who dared stray from The Left-Wing Thought Plantation.

1. About events that happened more than 50 years ago, we now know that CNN has spoken only to random people in Detroit who went to school with Carson. Most of these people did not even know Carson before he was 14 years-old, the time in question.

2. Unlike the many details in Obama’s biography that were proven lies, CNN has proven nothing. Therefore the left-wing network can only attack Carson using lies of omission and innuendo.

3. CNN reporter Maeve Reston has outright lied about Carson stabbing someone. He did not. 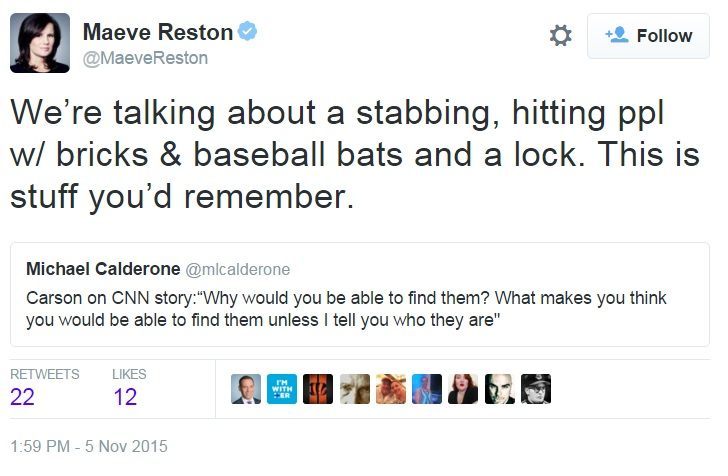 4. CNN bent over backwards to buried information it discovered that corroborates Carson’s story:

5.CNN is downplaying the crucially important news that way back in 1997, long before Carson had any political ambitions, Carson’s own mother corroborated the stabbing story. This is a CNN lie of omission: 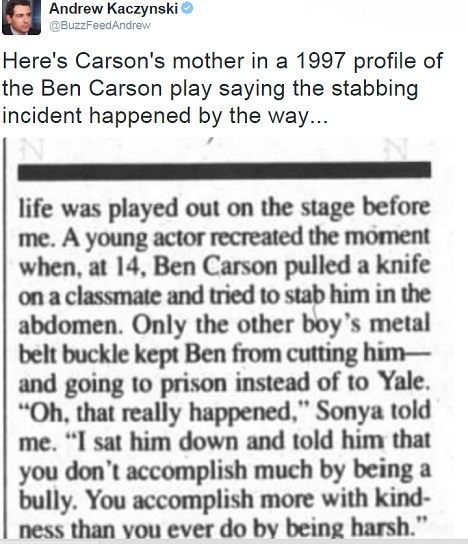 The DC Media needs to stop whining about its critics and look within. Corruption, lies, racism, provincialism, bias and privilege are rotting the industry.

If the DC Media doesn’t want to be completely destroyed and made even more irrelevant than it already it, it needs to be as aggressive with Democrats and they are with Republicans and stop lying.