The New York Times’ Maggie Haberman, a “journalist” so in-the-tank for Hillary Clinton she allows the former Secretary of State to literally rope her in public, is using the front page of the New York Times to outright lie about Republican presidential frontrunner Donald Trump. The headline reads, “Donald Trump Sets Off a Furor With Call to Register Muslims in the U.S.”

No part of that headline is true.

Most especially the “call to” part.

It is an objective, obvious, pro-science fact that Trump has not “called” for the registering of Muslims. By the time this piece ran, Trump had already shot down the  DC Media’s scurrilous, provable 24 hour lie. It should come as no surprise, though, that a so-called journalist who agrees to something like this is utterly incapable of shame. That’s Haberman in black: 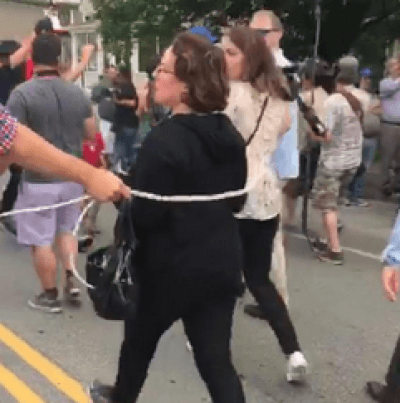 If you read Haberman’s Hit-Piece-For-Hillary, she is in no way interested in all the mitigating evidence out there. Writing for National Review, Andrew McCarthy notes that on Thursday, when Breitbart News asked Trump a direct (not loaded) question about what needs to be done in the area of domestic surveillance, especially as it pertains to the Muslim community, Trump never even broached the idea of a national registry:

This gets back to why I have my doubts that Donald Trump actually intended to propose a Muslim registry. It so happens that on Thursday morning, hours before the remarks that got him in hot water, Trump appeared immediately after I did in a telephone interview on the Breitbart News Daily program, which has just debuted on satellite radio. (I cannot find my interview, but Trump’s is here.) The host, Steve Bannon, first queried me about surveillance — in particular about how, in the 1990s Blind Sheikh terrorism prosecution, we proved that mosques and Islamic community centers were used by jihadists to store and transfer weapons, plot attacks, organize training, recruit young Muslims, and raise funds.

I opined that the only sensible strategy for preventing terrorist atrocities like the one last week in Paris (Thursday’s Mali attack had not happened yet) was to emphasize (a) intelligence collection regarding radical mosques (which are not hard to distinguish from non-radical mosques) and (b) the cultivation of cooperation from the American Muslim community, including informants.

Steve and I noted that this was the very successful NYPD approach after 9/11, but it had recklessly been abandoned by Mayor de Blasio’s administration. And, as I’ve previously explained, the Obama administration’s “Countering Violent Extremism” strategy similarly rejects the prudent NYPD surveillance approach pioneered by former commissioner Ray Kelly. Obama prefers to have our law-enforcement officers retrained by the administration’s “partners” in Islamic communities — including Islamist organizations linked to the Muslim Brotherhood, which insist that Islamist terror has nothing to do with Islam.

Trump came on right after I hung up, and Bannon proceeded almost as if it were a continuation of our conversation. He noted that I had made a case for reviving the NYPD approach and the surveillance of radical mosques. Trump agreed that the NYPD had it right, that the development of informants was key, and that intelligence-gathering at mosques had to be stepped up. In tossing out a barrage of ideas about aggressive surveillance, Trump never came close to suggesting a Muslim registry.

After being challenged by the Washington Post’s Dave Weigel about her dishonest headline (Weigel is rightly concerned that this “Muslim registry” nonsense is only going to further erode public trust in the media — of all people, John Harwood agrees), Haberman defended her lie by dissembling about Trump’s use of the word “absolutely” in response to a loaded question from a NBC News (naturally) reporter.

Trump’s “absolutely,” however, was clearly in reference to strengthening the border. Look at the whole transcript. When the NBC News reporter asks, “Is that something your White House would like to implement?,” Trump has just talked about fortifying the border and obviously believes that is what the NBC reporter is referring to:

Reporter: Should there be a database system that tracks Muslims who are in this country?

Reporter: Is that something your White House would like to implement?

Donald Trump: I would certainly implement that. Absolutely.

This is cut and dried. It should come as no surprise, though, to learn that Haberman is not alone.

Appearing on MSNBC Saturday morning, The Washington Post’s Philip Bump claimed that Trump said “yes” to registering Muslims at mosques. He said no such thing.

We’re a year away from the election and already the DC Media is openly, flagrantly shamelessly lying.

People who agree to something as humiliating as this are not journalists. Not even close: