Before the bodies were even counted in San Bernardino, the elite DC Media had already taken the lead from their Master, President Obama, and used an obvious terror attack committed by two Muslims to launch left-wing propaganda attacks against the Christian Faithful and, of course, guns.

Latest updates at the top. All times Eastern…

“The Daily News’ front page is not, in any way, shape or form, condemning prayer or religion,” said Jim Rich.

“Anyone suggesting otherwise is — either intentionally or unintentionally — misconstruing the point, which is that most GOP politicians have offered nothing but empty platitudes and angry rhetoric in response to the ongoing plague of gun violence in our country.”

What a liar. The cover wasn’t an attack on platitudes, it was an attack one a very specific thing, “Thoughts and Prayers,” and the snarky headline screamed “GOD ISN’T FIXING THIS.”

CNN’s Fareed Zakaria went so overboard preaching gun control that even Wolf Blitzer tried to steer him back on course by repeating again and again that this Farook guy is a terrorist.

On top of being a left-wing propagandist, Zakaria is also a known plagiarist.

Wolf Blitzer and his panel of guests are not only aggressively (and oftentimes absurdly) talking around the word “Islamic,” to keep the anti-science “workplace violence”narrative alive, the victim-blaming has begun with speculation that Farook might have been triggered into terrorism due to his work colleagues mocking his ethnic background or that of his wife.

All the evidence so far shows the exact opposite, including a baby shower held for Farook and his wife.

There is no evidence of this. None. For the victims’ families to have to sit home and watch their dead and injured loved ones smeared… Beyond despicable.

This is the delusional, alt-universe Huffington Post homepage right now: 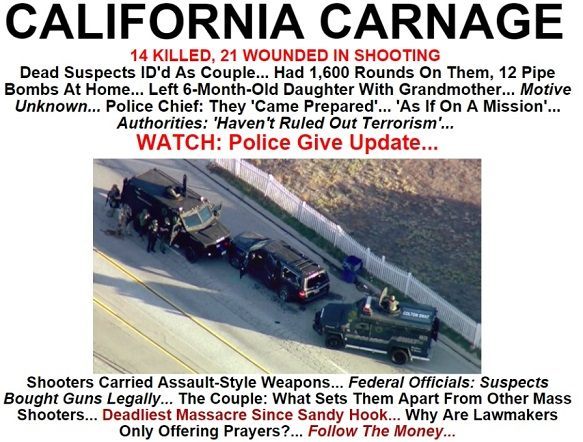 12:57 pm — One Week Ago Obama Assured Us There Was No Terror Threat

According to the most recent news reports, not only was the San Bernardino Muslim terrorist radicalized, CNN’s Jake Tapper is reporting that he was “in touch with more than one terrorism subject whom the FBI were already investigating.”

Just one week ago, President Obama assured all of us that there were no “specific or credible threats” against the United States.

The F.B.I. just reported that the terrorist visited both Saudi Arabia and Pakistan. His wife, and co-terrorist, was here on a Pakistani visa.

This is a huge victory for New Media. Turn on your televisions. Open you newspapers. The full on, coordinated assault by the DC Media to strip Americans of our guns rights is coordinated and absolutely relentless.

Nevertheless, through research and truth, New Media has cut through the media’s lies and educated the American people to a point where this is where things stand now:

Americans increasingly see guns as the solution, not the problem https://t.co/ECfGnmZlLdpic.twitter.com/Q3t9YXAj72

In short, we are kicking the DC Media’s ass.

You don’t drop the baby off with mom, build remote control bombs, and strap on internet cameras if you’re going to commit an act of workplace violence spurred by an argument. National Review’s Jim Geraghty breaks this down brilliantly here.

Nevertheless, to protect Obama and Hillary, and to keep the focus on gun-grabbing, the media is moving the pieces into place to distract from what is Islamic terrorism by using something called “workplace jihad.”   “Workplace jihad” sounds an awful lot like “White Hispanic,” another phony hybrid the media invented when the facts got in the way of their desired narrative.

11:21 am — Chuck Todd Criticizes Congress for Inaction On Mass-Shootings — Not Obama

As I mentioned below, the media refuses to hold President Obama responsible for this disturbing rash of mass-shooting that seem to have exploded under his watch.

After praising Obama’s Oval Office statement (which was fine), NBC’s Chuck Todd then ripped into Congress for inaction. As though we don’t have a president to lead and lead the way, Todd wondered why Congress doesn’t put politics aside and hold hearings and go on fact-finding hunts.

Again and again and again, this is what we see when it comes to these mass-shootings. To get off the hook, to shirk his responsibility, all Obama has to do is crybaby over the fact that he can’t use these shootings as  a way to grab our guns, and the media says, “Oh, poor guy. It’s not his fault.”

Then the blame is magically shifted to Republican Party.

—   10:45 am — What the Media Isn’t Telling You: CAIR Spokesman Wants Sharia In America   Muzammil H. Siddiqi, a CAIR spokesman you have seen on your television over the last 24 hours, wants to implement Sharia here in America. Weird how the DC Media doesn’t tell us that:   —  CAIR press conf speaker Muzammil Siddiqi on implementing shariah in America. #SanBernadinoShooting pic.twitter.com/wvUxB6KbAQ

10:30 — Countless Shootings On His Watch; Here’s Why the Media Doesn’t Hold Obama Accountable

This surge of mass-shooting during Obama’s reign is, if memory serves, unprecedented. I’ve never seen anything like it. And yet, every time, Obama does nothing except express his “frustration” over the fact that he can’t use these shootings as an excuse to disarm America. Here’s how it works…

DC MEDIA: Mr. President, there has been another mass-shooting.

DC MEDIA: Oh, okay. You poor guy. It’s not your fault. We’ll write a story about your frustration and blame Republicans.

The DC Media and Obama have the same goal. They are intentionally tying to create a dynamic where gun-grabbing is the only solution to this problem. So they both pretend that unless laws are passed restricting our Second Amendment civil rights, these shooting will continue.

They don’t care about the victims. If they did, they would call for measures that would actually prevent these mass shootings: more armed guards, more concealed carry permits, the end of these stupid gun-free zones.

All Democrats and their media care about is disarming the populace. That is there only goal. All these dead people are seen as nothing more than sacrifices to the cause.

Earlier this year, I wrote about this in more depth.

10:15 am — How Can We Not Despise The Media When They Do Things Like This?

Among others, Bloomberg News and CBS found it necessary to report how close the San Bernardino massacre is to a Planned Parenthood.

The hideous Carol Costello, the CNN anchor who LOL’d at audio of Bristol Palin reporting an assault, brought gun-rights advocate John Lott on the air to shut him up every time he made a good point.

In that phony pleading voice Costello has perfected, as soon as Lott would point out that gun crimes in “gun-free” Europe are as bad or worse (in the case of France) as they are here, Costello would cut in and whine, “But what are we going to do to stop these shootings in America.”

Lott pointed out that these shootings already occur in highly-regulated gun control areas and that there are fewer shootings in areas where people are allowed to get a Concealed Carry permit.

“You make it safer for attackers when they don’t have to worry about law-abiding citizens being able to stop them,” Lott correctly pointed out.

Looking exasperated and a little sad, and a lot like an aging cheerleader, Costello ended the interview.

9:52 am — WaPo Tiptoes Around ‘Jihad,’ Blisters Trump Over a Tweet

Donald Trump apparently thinks the San Bernardino shootings are good for him https://t.co/iu7FAqOGPb

9:39 am — CNN Condemns Ted Cruz But Not Barack Obama for ‘Not Knowing all the Details’ Before Speaking

Without criticism, for about 18 hours now, left-wing CNN has been running video of President Obama pushing for gun control. Obama made the gun-grabbing statements while the two Muslim mass-murderers were still on the loose — when we knew absolutely nothing about anything. Nevertheless, taking Obama’s lead as they always do, CNN has been relentlessly pushing gun control, especially this morning. Republican presidential candidate Ted Cruz, however, was admonished for speaking when he doesn’t “know all the details.” CNN’s Jeff Zeleny hit the Republican after playing a clip of  Cruz giving a speech where, within the context of San Berardino, he criticized the Obama Administration for their unwillingness to call Islamic terrorism by its name.

Democrat presidential candidate Martin O’Malley appeared on MSNBC to attack Republican House Speaker Paul Ryan for “talking about due process and these sorts of issues.” O’Malley called Ryan’s defense of civil liberties  “outrageous!” MSNBC host Jose Diaz-Balart did not push back, he just went right on asking the kinds of questions that would allow O’Malley to push for more government gun-grabbing. The context here is the terror watch-list. Without due process, Democrats and the DC Media want to deny people their Second Amendment civil rights just because the federal government places their name on a list. This is America. We don’t lose our rights just because the government puts our name on a list. If the people on this list are so dangerous, why haven’t they been indicted or deported? O’Malley is a fascist. And so is NBC News.

I saw this. This horrible woman was smugly sure the terror attack was workplace violence provoked by some form of racism. If CNN had any dignity, circus music would have played over the entire segment. —

@johncardillo Casey Jordan on CNN said the “holiday party may have been offensive to him.” Great reason NOT to import Muslims then! — Katie McHugh (@k_mcq) December 3, 2015

The leftwing Washington Post wasted no time in using the dead bodies of 14 innocent people to push for more useless government funding to study “gun violence.”

On Wednesday morning, a group of doctors in white coats arrived on Capitol Hill to deliver a petition to Congress. Signed by more than 2,000 physicians around the country, it pleads with lawmakers to lift a restriction that for nearly two decades has essentially blocked the Centers for Disease Control and Prevention from conducting research on gun violence.

Oh, the tragic irony that a terror attack committed by two Muslims might have saved taxpayers from yet another taxpayer subsidized, left-wing, gun-grabber wankathon.

Unless you are looking for gun control propaganda, CNN has been absolutely worthless all morning. But of course, CNN is always worthless and pushing gun control, so what we have her is a day with a “y” in it.