Arianna Huffington wants you to know that her site the Huffington Post is very upset and very SERIOUS in its outrage over Donald Trump’s call to temporarily block all Muslims’ entry into the United States if he is elected President–so upset and so SERIOUS that her editorial team will no longer categorize Trump’s 2016 campaign as “Entertainment.” 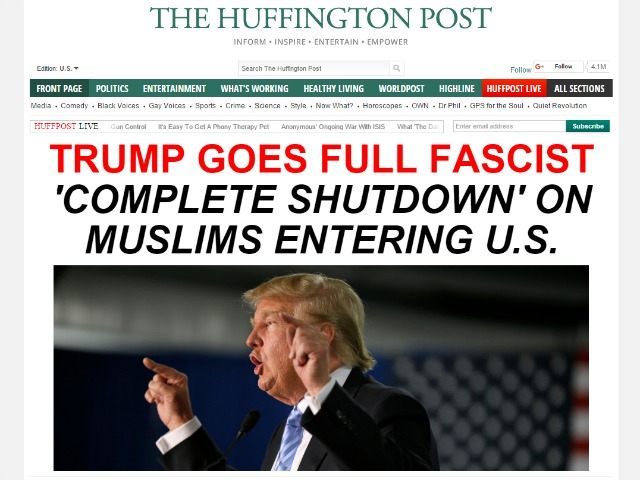 Earlier today, the candidate currently leading in the polls for the Republican presidential nomination called for a “total and complete shutdown of Muslims entering the United States.” That was, of course, Donald Trump. As Jeffrey Goldberg just tweeted, “Donald Trump is now an actual threat to national security. He’s providing jihadists ammunition for their campaign to demonize the US.”

On the heels of Trump’s proposed change for America, we will be changing how we cover him at The Huffington Post. Back in July, we announced our decision to put our coverage of Trump’s presidential campaign in our Entertainment section instead of our Politics section. “Our reason is simple,” wrote Ryan Grim and Danny Shea. “Trump’s campaign is a sideshow.”

Since then Trump’s campaign has certainly lived up to that billing. But as today’s vicious pronouncement makes abundantly clear, it’s also morphed into something else: an ugly and dangerous force in American politics. So we will no longer be covering his campaign in Entertainment. But that’s not to say we’ll be treating it as if it were a normal campaign.

Our decision in July was made because we refused to go along with the idea, based simply on poll numbers, that Trump’s candidacy was actually a serious and good faith effort to present ideas on how best to govern the country. We continue to believe this to be true — and will continue to let it guide our coverage — but much has changed.

Yes, there was certainly no shortage of ugly comments from the beginning, as he kicked off his campaign with outrageous comments about Mexicans. But at first, this over-the-top xenophobia, though disgusting, played as the sour shtick of a washed-up insult comic. Now that Trump, aided by the media, has doubled down on the cruelty and know-nothingness that defined his campaign’s early days, the ‘can you believe he said that?’ novelty has curdled and congealed into something repellent and threatening — laying bare a disturbing aspect of American politics.

We believe that the way we cover the campaign should reflect this shift. And part of that involves never failing to remind our audience who Trump is and what his campaign really represents.