So, the left-wing Daily Beast wants a hit-piece attacking Breitbart News, the GOP consultant class is scrambling for any kitchen sink available, and through lies of omission and the ever-feeble guilt-by-association, a hit-piece is born. No biggie. This is how the left-wing media and the Republican Establishment have always colluded. What did stand out, though, was this whole Bethany Mandel thing.

The Daily Beast opens its diatribe against Breitbart with Ms. Mandel’s personal story, which is not only wildly misleading, but where the evidence appears to prove the exact opposite.

A good faith search found that Breitbart News has never attacked or criticized Bethany Mandel, a freelance, right-of-center contributor to sites like The Federalist.

However, there are close to a dozen instances of her taunting and smearing Breitbart News and our staffers.

The evidence is below. First, though, you must carefully read the Daily Beast’s story of a young woman who “has especially tangled with Breitbart News,” and the end result is her having to purchase a firearm and discuss her problems with local law enforcement.

This is how the Daily Beast chose to open its story:

Conservative essayist Bethany S. Mandel, who has been awash in a deluge of social media abuse since she began denouncing Donald Trump, finally purchased a handgun over the weekend.

“It’s a .22 magnum revolver,” says Mandel, the mother of two young children, who applied for a firearms permit at her local suburban police department after absorbing a fusillade of vile, anti-Semitic tweets and Facebook messages in recent months.

“I’m picking it up,” Mandel says about her firearm, “after the shop’s background check comes back.”

Having practiced at a New Jersey firing range, she prefers a revolver to a pistol because “my aim is far better,” she says.

“My husband [New York Post Op-Ed page editor Seth Mandel] isn’t happy about it,” she says about her new acquisition.

The 29-year-old Mandel, who writes for The Federalist, a conservative/libertarian web site that often inveighs against Trump, is a pugnacious online presence who frequently crosses swords with self-avowed acolytes of the Republican presidential frontrunner.

She has especially tangled with Breitbart News, the rabble-rousing, Trump-friendly Web site—named for its late founder, culture warrior Andrew Breitbart—that regularly savages the GOP establishment, the media elite, the Washington consultant class, and the Fox News Channel, which it likes to portray as the willing enabler of all these sinister forces.

“When I went to my local police department and applied for the gun permit, they said, ‘Maybe you should stop writing things that make people angry,’” Mandel recounts. “And I said, ‘OK, I’ll give that some consideration.’

‘You have kids. Why would you do that?’

‘Because I want to leave them a world that is worth living in.’”

And here is where things get even more interesting.

A good faith search of Twitter found that Bethany Mandel regularly, and without provocation, taunts Breitbart’s Matthew Boyle. In response to these taunts, Boyle has never responded in kind. Moreover, Mandel’s taunts provoke others on Twitter to taunt Boyle, which is what she is accusing Breitbart News of doing to her.

Note that some of these taunts are from a week or two ago. Why this is important is detailed below. 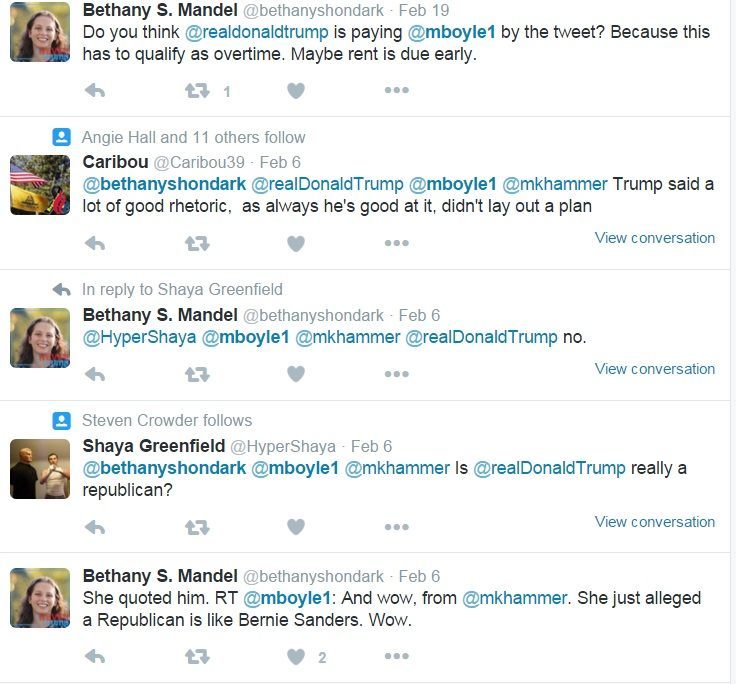 Personally, I love to mix it up on Twitter. But a good faith search resulted in only pleasant Tweets from Mandel to me. Until Tuesday, I did not even follow Ms. Mandel on Twitter. The only tweet I could find from me to her was from yesterday, where I ask her to check her Direct Message. That was how I requested her comment on this article. 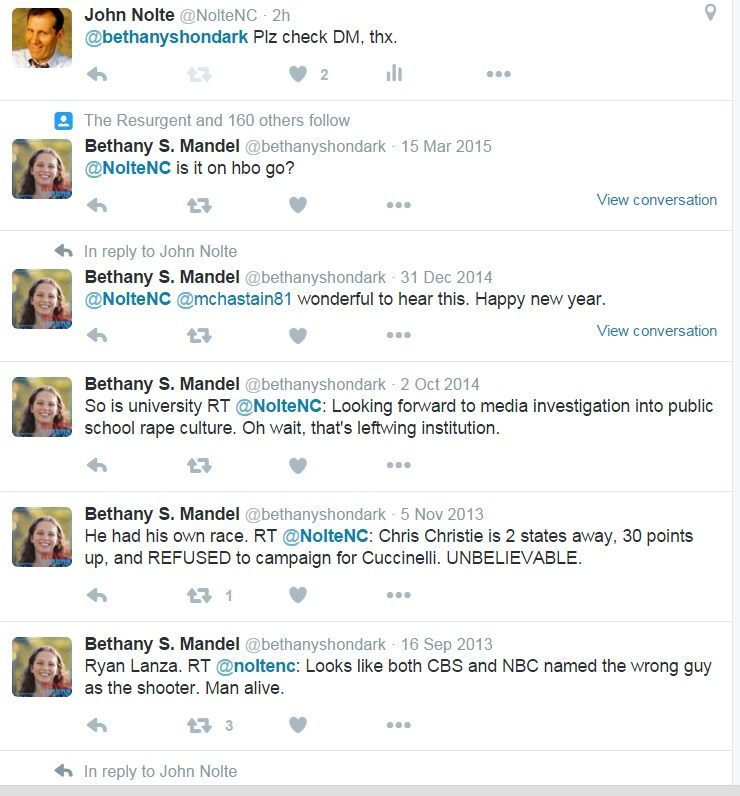 A search of Mandel’s Twitter handle and “Breitbart” shows that she regularly initiates criticism and smears against our site, which in turn results in more tweets attacking us.

Again, many of these unprovoked taunts are from just a week or two ago, which is utterly baffling when she is claiming to the Daily Beast that “tangling” with us has resulted in abuse, and her fearing for her and her children’s safety. 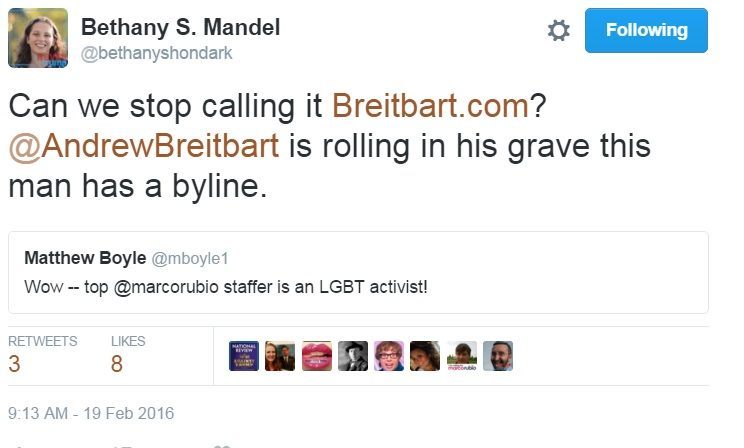 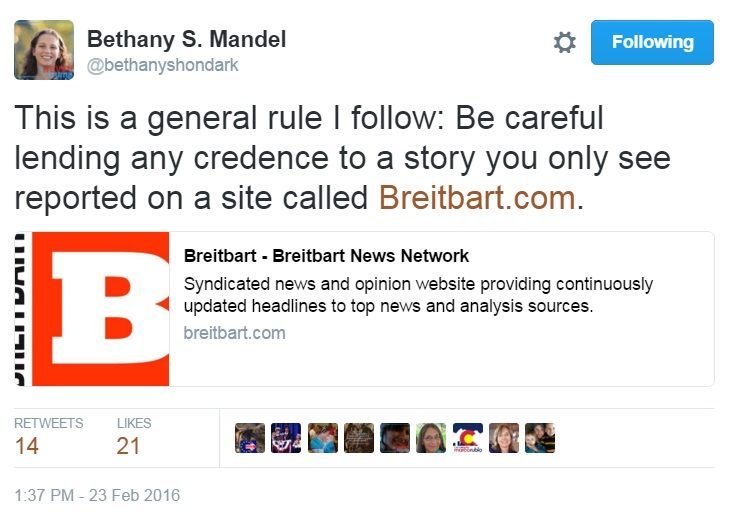 There do not appear to be any tweets of any kind between Ms. Mandel and Alex Marlow, our editor-in-chief.

As a result of these findings, I have personally, and without being accusatory, reached out to Ms. Mandel asking for any specifics she has to justify these very serious accusations against Breitbart News in the Daily Beast.

So far she has chosen not to respond.

Should she change her mind, I will update this piece immediately, and readily admit we missed something. All of my searches were in good faith, but it is a big Internet.

Let me say again, though, that after a good faith search, we find no record of any kind of attacks or even criticism between Breitbart News, our staffers, and Ms. Mandel.

Quite the opposite. All we found is that Ms. Mandel regularly and publicly taunts and attacks us.