Axios national politics reporter Jonathan Swan, who earlier this week revealed that some of his White House sources were astonishingly clueless about the existence of The American Prospect magazine, believes that West Wing operatives (most of whom are Democrats) will anonymously, of course, try to downplay Breitbart News’ influence in the days ahead.

“Within a few weeks’ time – actually probably sooner -West Wing officials will be anonymously telling reporters that Breitbart is a joke and its hit pieces shouldn’t be taken seriously,” Swan predicted on Saturday after President Donald Trump tweeted “Fake News” will need the competition from Breitbart News. Trump added that his former chief strategist Steve Bannon “will be a tough and smart” voice at Breitbart News, which may be “even better than ever before.”

Steve Bannon will be a tough and smart new voice at @BreitbartNews…maybe even better than ever before. Fake News needs the competition!

The anonymous West Wing officials should speak to the “Gang of Eight” pro-amnesty Senators about Breitbart News’ influence. After the 2012 election, the Republican National Committee (RNC), with considerable input from former Florida Governor Jeb Bush’s associates, inexplicably recommended amnesty for illegal immigrants as its only policy solution. After Sen. Marco Rubio (R-FL) became the face of the Gang of Eight, nearly every media outlet, including those supposedly on the right like Fox News, promoted the Gang of Eight’s comprehensive amnesty bill. Breitbart News, though, was virtually alone when it decided to take the opposite approach and stand up for the interests of American workers.

As I previously noted in a piece that Ann Coulter said was the “best explanation of Trump’s victory, new media landscape & GOP idiocy,” Breitbart News “adopted Nolan Richardson’s relentless ‘40 minutes of hell’ strategy, which is one that actually benefits underdogs, as this New Yorker article (‘How David Beats Goliath’) on a youth female basketball team revealed.”

Joshua Green noted in his Devil’s Bargain book that Breitbart News “published a daily fusillade of alarmist fare about hordes of murderous illegal immigrants pouring across the southern border and the treasonous Republicans in Congress turning a blind eye to their menace.” And in the end, Breitbart News prevailed in the amnesty battle even though the outlet was “undersized, outmanned, and taking on the ‘professional conservative’ establishment, the GOP establishment, the establishment media and their liberal allies, the international establishment, and the left.”

White House aides who want to downplay Breitbart News as a joke (why would they do so anonymously if they did not fear Breitbart News?) should ask former House Speaker John Boehner. They could ask former House Majority Leader Eric Cantor, who was ousted in a 2014 primary in arguably one of the greatest political upsets in history. After Breitbart Texas’s massive scoop about illegal immigrants who were being warehoused in Texas drove the news cycle on the issue for weeks, immigration became more of an issue in Cantor’s race. While legacy media outlets–in addition to GOP operatives–largely ignored the race, Breitbart News was one of the few outlets that covered it. Cantor’s stunning loss was also the final “nail in the coffin” for the Gang of Eight’s amnesty bill.

They could ask Messrs. Jeb! and Rubio about how damaged they were heading into the 2016 election cycle because of Breitbart News’ coverage of their positions on various immigration issues. They could ask Trump’s other rivals in the 2016 GOP primaries as well. Or they could ask Attorney General Jeff Sessions, who emphasized how “extraordinarily influential” Breitbart News was in 2015 when he was a Senator.

“They have an incredible eye for an important story, particular ones that are important to conservatives and Republicans,” Sessions told Green then. “They’ve become extraordinarily influential. Radio talk-show hosts are reading Breitbart every day. You can feel it when they interview you.”

Breitbart News is even more influential now, especially in the right-of-center news ecosystem. Essayist Wil Hylton noted in this weekend’s New York Times magazine cover story that there is “no real precursor for Breitbart” of a news outlet that was able to so quickly emerge and “dominate the political conversation in a pivotal election” like Breitbart News did during 2016 presidential campaign. Breitbart News is currently ranked #63 in the United States on Amazon-owned Alexa.com, and its Facebook page is #13 in the world. A recent Axios report concluded that Breitbart News has had the “most engaging right-leaning” Facebook page since Trump’s election.

‘‘We didn’t set out to study Breitbart,’’ Harvard professor Yochai Benkler told the Times. ‘‘Breitbart came from the data, not the other way around.’’

As the Times magazine cover story noted, during the 2016 election, Benkler and his team of professors and scientists from MIT and Harvard “developed a method to determine the political association of any website’s audience, with blue dots representing liberal readership and red dots representing conservative readership.”

“Looking at the blue parts of the image, nothing was surprising: The largest circles were CNN and The New York Times, each shaded pale blue to indicate a center-left association. But the other side of the image showed just one big red circle: Breitbart,” Hylton wrote in his Times magazine essay. “It was three times the size of Fox News and maybe a dozen times larger than any other news source on the right. If you wanted to know who was driving the Republican agenda in 2016, you didn’t need to look much farther than the massive crimson orb parked on Benkler’s screen.” 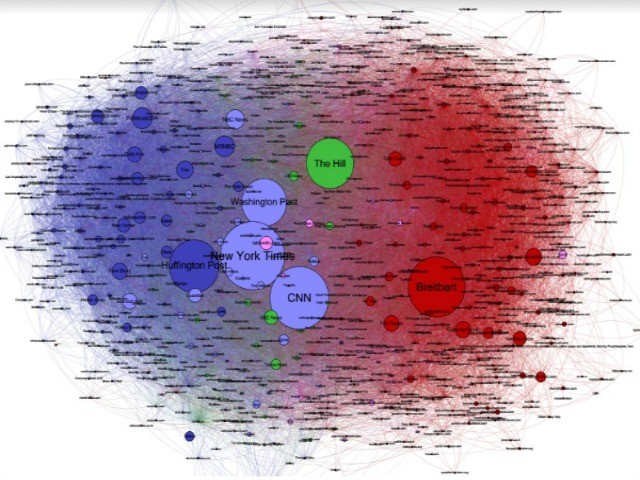