On June 13, 2006, at the now defunct Reid Report, and under the ghoulish headline “You know, it would kill her, and I think I’m cool with that…” Reid introduces the excerpt by mocking Coulter as a man (something the notoriously homophobic Reid frequently did).

Here is the excerpt Reid references:

Would it kill you, “Godless” author Ann Coulter, to do us all a favor and kill yourself? (Oh, well, yeah, I guess it would kill you.)

After her recent rabidly hateful, foaming-at-the-mouth, sub-human “Today” show appearance — in which she reiterated her assertion that 9/11 widows are “enjoying their husband’s deaths” — even her former supporters began to fantasize about how much nicer the world would be if it were Coulterless.

Reid then follows this with a cheer of personal approval over the idea of Coulter being killed.

“Oweee. And I mean that in a good way,” Reid writes.

Just below that is a link to Reid Report piece titled “Ann Coulter is a very bad man.” 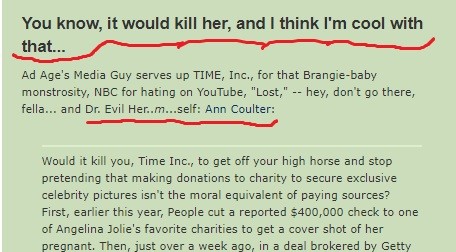 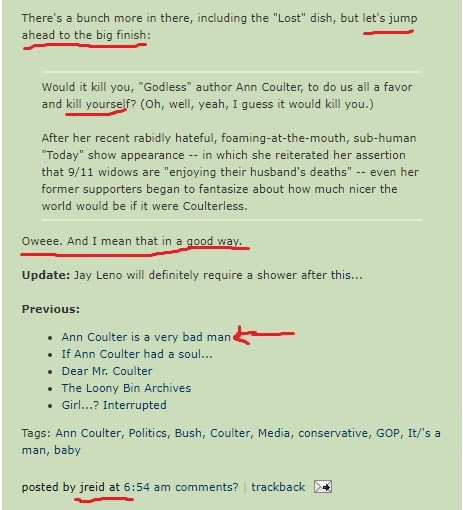 It is important to point out that, at the time, Reid was not a thoughtless, immature teenager championing the untimely death of a political opponent. In 2006, Reid turned 38, co-hosted a local radio show, and wrote a political column for the Miami Herald.

Reid was also a grown woman when she wrote a seemingly unending series of homophobic posts on this same blog.

Worse still, Reid was a 49-year-old anchor for NBC News at MSNBC when she lied to the whole world about a hacker writing some of those homophobic posts. To cover up her gay-baiting past, Reid not only sent the media on a wild goose chase in search of her fabricated hacker, she reportedly involved the FBI in her phony crime.

On top of that, Wednesday night we learned that Reid has spread 9/11 conspiracy theories.

Oh, and this same Joy Reid is a big star at NBC News, an anchor for MSNBC, and someone the network chose to co-host a high-profile panel on bigotry earlier this week. BIGOTRY.