ROME — A video showing the beating of a young boy that went viral in Italy this week with the caption “latest case of homophobia” has turned out to be a fraudulent reconstruction of events with nothing to do with gay-bashing, Italian media have reported.

The hashtag #omofobia was trending on all Italian social media this week as people reacted with outrage to a 16-second cell-phone video showing one boy repeatedly punch another, giving him a bloody nose in Cagliari, Sardinia, purportedly because he was gay.

“Italian politicians, tell us how long we will have to tolerate and endure homophobic aggression without having a law to defend us, to protect us and to punish those who carry out hate crimes like these, as it should be !? How long?!” wrote one exasperated Twitter user. 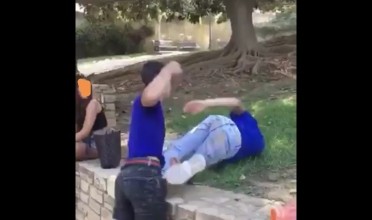 A scene from the viral video that has now been denounced as fake news by Cagliari police.

“I would like to hug you, hold you to me. Telling you that all is well. That you are important. That you are not wrong. Homophobia is the garbage of our society. Homophobia is barbarism. Homophobes are shit. We will defeat them together. By any means necessary,” wrote another of the hundreds to comment.

After investigating the case, local police found that there had indeed been an act of violence (as was evident from the video) but that it had nothing to do with homophobia.

For more than 12 hours the video bounced around social media (Facebook, Instagram, and Twitter) accompanied by the accusation: “This is the latest case of homophobia, he was beaten because he was gay,” setting off an avalanche of protests and demands for justice.

According to Cagliari police, however, the video as it was circulated amounted to “fake news,” since the two boys were fighting over a girl.

Moreover, the event actually occurred last July, police said, and the two boys have long since reconciled. Authorities interviewed the boys as well as their parents, who believe their sons were victims of an ideological scam employed to advance an agenda at their expense.

Police have initiated an investigation into why the video was released three months after the fact in a context far from the reality of the situation. Although the images were filmed in a public place, officials have noted, they concern minors and would require consent from the parents for publication.

Arc Cagliari, a local chapter of a nationwide LGBT group, called the beating, a “brutal, shocking act meriting a strong response from institutions and civil society.”

The association issued an urgent call for a law against homo-bi-transphobia, underscoring the need for “a serious prevention of discrimination, which carries over into the correct use of social networks, because if the wounds of a fist can heal thanks to the care and support of the people around the victim; a viral video can last forever and risk becoming an eternal wound.”