A social media rumor linking Lachlan Murdoch to cases of coronavirus in Aspen, Colorado, has turned out to be false.

The rumor appears to have started last week with a tweet from a Johns Hopkins University professor, who alleged the Fox Corp. CEO helped to spread the virus by partying in Aspen with Australian tourists who were diagnosed with COVID-19.

But it turns out that the professor misidentified Murdoch. Fox said in a statement that its CEO hasn’t been in Aspen since last year, adding the rumor is “false and malicious.” The Johns Hopkins professor allowed her tweet to stay up for four days, even though other people  posted corrections in her Twitter timeline.

On Friday, assistant sociology professor Christy Thornton deleted the tweet after she was contacted by Breitbart News, which made no requests that she remove the tweet. Her entire Twitter account was subsequently deleted over the weekend.

Christy Thornton is an assistant professor of sociology at Johns Hopkins, where her area of academic focus includes Latin America. In her tweet, she stated that relatives of a friend who live in Aspen contracted coronavirus and that the culprit was Murdoch and his Australian friends. She referred to Murdoch as “”LACHLAN FUCKING MURDOCH.” 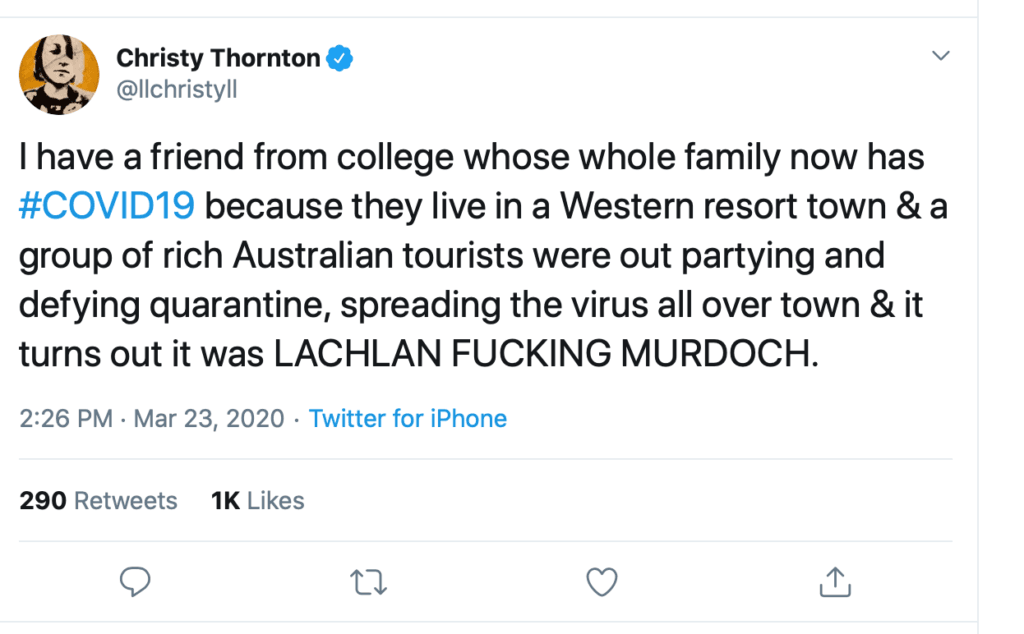 Thornton declined to say why she made the accusations. She also didn’t say where she got her information.

In the past, the professor has used social media to express strong anti-Trump sentiments. In one tweet found through the Wayback Machine, she called President Donald Trump a “motherfucker,” during the federal government shutdown in 2019.

Her tweet about Lachlan Murdoch came after a report earlier this month in the Aspen Times saying two Australians were ordered into isolation after testing positive for COVID-19. The newspaper said the tourists may have defied a public health order and left their hotel room to ski in Snowmass Village.

“Lachlan Murdoch has not been in Aspen since last year because he is leading a publicly traded company during a global health crisis,” a company spokesperson said. “This kind of false and malicious rumor only adds to the confusion and hurts our collective efforts to fight coronavirus.”

2/2 "…This kind of false and malicious rumor only adds to the confusion and hurts our collective efforts to fight coronavirus.”

A spokesperson for Johns Hopkins’ Krieger School of Arts & Sciences declined to comment, noting that the tweet had been deleted.

The Australian tourists have created a media frenzy in their native country following reports alleging that they spread the coronavirus upon their return to Melbourne. The group has been blamed for creating an outbreak of the virus within wealthy enclaves in the southern Australian city.

One member, Eliza Honan, reportedly traveled with friends and family to Aspen and returned to Australia on March 13.  But she said that upon returning to Melbourne, she immediately self-isolated after experiencing flu-like symptoms.

Fox Corp. is the parent company of Fox News, the Fox Business Network, and the Fox Broadcasting Company.