While justifying the U.S. incursion into Afghanistan after the 2001 9/11 attacks, Egyptian-American political analyst Magdi Khalil criticized the “naive” and “unrealistic” American attempt at “nation-building” and bringing democracy and human rights to the “extremist Islamic wasteland” of Afghanistan.

Khalil, who is also a prominent human rights advocate and director of the Middle East Freedom Forum, made the remarks in an interview that aired on RT on Tuesday.

“In 2003, America declared the end of its major military operations concerning al-Qaeda and the Taliban. So why did it stay [in Afghanistan]?” he asked.

Khalil blamed the U.S. decision to remain on its naivety.

“Because of the American naïve perceptions manifested by George W. Bush, that America can bring democracy, human dignity, and human rights into this extremist Islamic wasteland,” he said.

“[Bush] did not realize that this is impossible for these countries, for these Islamic wastelands, to have democracy, dignity, or human rights. Therefore, this project was bound to fail,” he added.

Khalil then explained why “the naïve concept of nation-building” could not work in a country like Afghanistan.

“Afghanistan is not a country like Japan, Germany, or South Korea, to build a nation in,” he said.

“These Islamic wastelands breed poverty, backwardness, corruption, and all kinds of religious extremism,” he added. “Therefore, America was right to go to Afghanistan, but it prolonged its stay there due to unrealistic reasons.”

Taliban fighters pose for photograph in Wazir Akbar Khan in the city of Kabul, Afghanistan, Wednesday, Aug. 18, 2021. The Taliban declared an “amnesty” across Afghanistan and urged women to join their government Tuesday, seeking to convince a wary population that they have changed a day after deadly chaos gripped the main airport as desperate crowds tried to flee the country. (AP Photo/Rahmat Gul)

Last month, as fighting raged throughout Afghanistan, President Joe Biden announced a timeline for a drawdown of U.S. forces from the area while assuring the Taliban would not overpower the American-backed Afghan military.

Subsequently, Kabul fell to the Taliban and embattled president Ashraf Ghani fled the country with $169 million of unclear origin upon hearing the news of the Taliban’s arrival, as the government collapsed and the capital’s U.S. Embassy was forced to evacuate.

In a stunning rout, the Taliban seized nearly all of Afghanistan in just over a week, despite the tens of billions of dollars spent by the U.S. and NATO over nearly two decades to build up Afghan security forces. 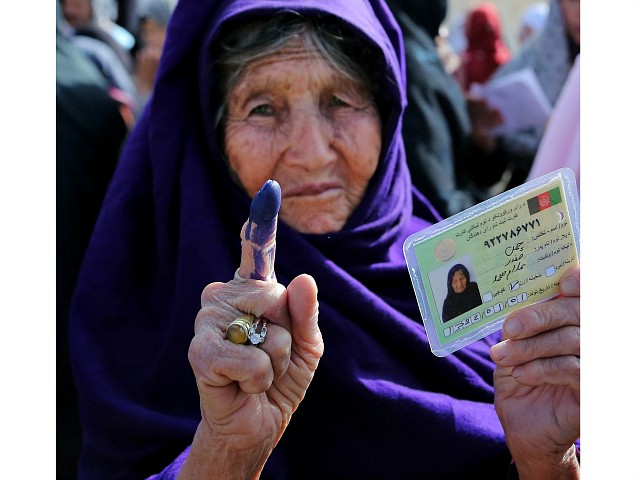 An elderly female Afghan voter shows her inked finger after she cast her ballot at a local polling station in Ghazni on April 5, 2014. Afghan voters went to the polls to choose a successor to President Hamid Karzai, braving Taliban threats in a landmark election held as US-led forces wind down their long intervention in the country. Afghanistan’s third presidential election brings an end to 13 years of rule by Karzai, who has held power since the Taliban were ousted in a US-led invasion in 2001, and will be the first democratic handover of power in the country’s turbulent history. AFP PHOTO/RAHMATULLAH ALIZADAH (Photo credit should read Rahmatullah Alizadah/AFP/Getty Images)

Many have opposed U.S. “nation-building” initiatives and a continued military presence in Afghanistan from the start, claiming that America should have exited the war-torn country soon after killing al-Qaeda founder Osama bin Laden.

However, as early as 2003, President Joe Biden defended the idea of “nation-building” in Afghanistan.

“In some parts in the administration, nation-building is still a dirty phrase but the alternative to nation-building is chaos,” Biden said during a hearing that year on rebuilding Afghanistan in the Senate Foreign Relations Committee

“The facts make one thing very clear, we have a great deal of work left to do in Afghanistan and a continued obligation to the men sitting in front of us to allow them to be able to do the work that needs to be done,” Biden said. 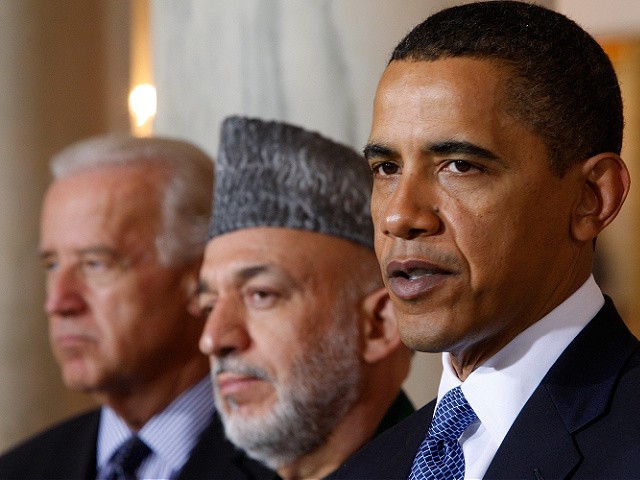 FILE – In this May 6, 2009 file photo, President Barack Obama, accompanied by Vice President Joe Biden, left, and Afghan President Hamid Karzai, makes a statement in the Grand Foyer of the White House after meetings with Karzai and Pakistani President Asif Ali Zardari. After months of rocky relations with the Obama administration, the U.S. and Karzai are getting their partnership back on track. If everyone stays on script during Karzai’s visit that starts Monday May 10, 2010, the Afghan president will leave Washington with a renewed sense of legitimacy and the political backing he needs for possible peace talks with the Taliban. (AP Photo/Ron Edmonds, File)

Biden warned that when warlords and drug traffickers take over a country, it becomes a haven for terrorism.

“That’s what happened under the Taliban and I believe if we’re not careful it’s going to happen again,” he said.