The following transcript has been edited for length.

BREITBART NEWS: Dr. Savage, let’s drive into the interview with a big and broad question: What’s your overarching analysis of Biden’s handling of the situation in Afghanistan in recent weeks?

MICHAEL SAVAGE: I don’t think I can add to what’s already been said and written about [Biden], this imposter, this failure, this bum, this mook, this faker who has gotten people killed. I am so incensed and outraged about what I am watching. Not only because of the deaths and destruction that have occurred thus far, but because what is coming will be far worse. Today we read that Biden’s friends, the Taliban, who he has entrusted with airport security [in Kabul], take an elderly folk musician and shot him in front of his family because music is not permitted, according to the Quran. This is terror’s greatest victory in my lifetime and it’s directly tied to Biden. It’s his biggest blunder. And to make it worse, look at the sad performance of [Biden officials] like [Pentagon press secretary] John Kirby and [White House press secretary] Jen Psaki putting on the lies, trying to gloss over the failures. All the world can see they are lying and smirking through it. These kids remind me of the kids who cheated in school and ended up running the government. They’re absolutely incapable of it.

Look at the tanks and weapons left behind. I thought any other government would have dissolved after the suicide bombing killing 13 U.S. service members and many Afghans. First, our hologram Biden was in hiding, then he came out and was clutching his cheat sheets during a press conference when being asked a question. He was leaning his head forward as if he was overwhelmed by it all. I’ve said Trump defeated ISIS and Biden brought them back to life. ISIS and the Taliban are two of the same sides of evil. It’s good cop, bad cop. Trump and the Russian air force ran ISIS out, which ran rampant under Obama. ISIS was locked up at Bagram Air Force Base and were released by the Taliban under Biden.

On top of this, Biden has weakened the military overseen by Defense Secretary Lloyd Austin and Chairman of the Joint Chiefs of Staff Mark Milley — a proponent of Critical Race Theory. They’re pushing woke ideology instead of military readiness. They were looking for white supremacists while Afghanistan blew up in their faces. And just the other day, Marine Lt. Col. Stuart Scheller blasted the military’s leadership. He should replace Milley. Instead he was fired and his pension denied. Then we hear a U.S. drone killed two ISIS planners with no names released. Why not identify them? To me, this feels like when [then-President Bill Clinton] bombed the aspirin factory in Sudan in retaliation for the attacks on its embassies in Kenya and Tanzania. Now they have Taliban death squads, Al Isha, using U.S. scanners and biometric databases to identify Afghans who worked with the U.S. or NATO, just like a Nazi unit out of Hitler’s Germany, and executing and torturing them.

The left, of course, is blaming Trump as part of their message, which is ludicrous. Trump wanted to withdraw from Afghanistan and had a strategy that didn’t include giving up Bagram Air Force Base. It will get a lot worse tomorrow when we withdraw for good. That’s when the slaughter and rapes will begin in earnest. 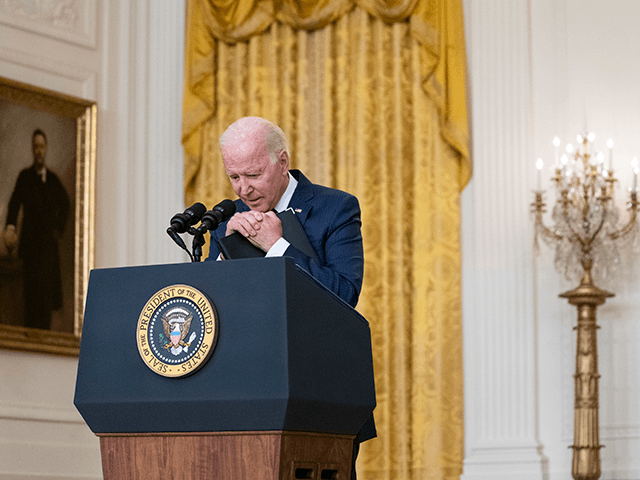 BREITBART NEWS: In a recent interview with Newsmax, you warned that there’s more than meets the eye regarding the establishment media’s seemingly critical coverage of Biden’s handling of Afghanistan. You suggested that it was less about the disaster ensuing post-withdrawal and more to do with planning for Biden’s successor, who right now would be Vice President Kamala Harris. Let’s unpack that.

MICHAEL SAVAGE: Who is really running the nation? Biden is not fit to be president. I don’t need to make any jokes about a man who is way past his shelf life. To me, he has presenile dementia or has overt dementia. Who is next? Kamala Harris, who is a stooge of the San Francisco political machine. She doesn’t really exists on her own and has no base. The Getty-Pelosi machine put in her power. I’ve lived in California long enough to see what goes on in this one-party state of ours, which is why it’s dying. Watch out, if Harris takes over, we will be looking back on old Joe as a centrist. God forbid we see her a president. Who would take her slot as vice president? They would pick a party hack. We’re in trouble one way or another, stuck with a two-party system which I’ve been opposing for years. I like the parliamentary system better because after [Afghanistan], there would have been a call for a new government like England or Israel. No question, a new U.S. government would have been formed. [Biden] would have been gone.

Let’s also talk about the Afghans being airlifted to the United States that are not being vetted. I asked on my podcast a week ago how many are trojan horse refugees. Common sense would say many. I don’t know how this ends. I know it’s going to get much, much worse. This is happening as our police have been deballed.

BREITBART NEWS: Thinking about Afghanistan through the lens of the Savage doctrine, what should the U.S. do or not do next about the war-torn country? What are your thoughts on Neoconservative Republicans and pro-war Democrats possibly pushing for re-engagement there.

MICHAEL SAVAGE: Of course. The military-industrial complex wants to build everything again that was just given to the Taliban. Think about the trillions of dollars that would cost. I wouldn’t send one U.S. troop [back into Afghanistan]. I would use drone strikes to knock out all the heavy equipment we gave [the Taliban] before it’s transferred to Iran or some other country.