When one sees the words “Joe Biden” in media commentary, one often sees, too, the word “restoration.” As in, Biden promises—or threatens, depending on one’s point of view—to restore the days of Barack Obama. More broadly, it’s often said that a hypothetical President Biden would also bring about the restoration of the entire liberal Democratic Establishment.

For instance, on March 5, David Brooks, columnist for The New York Times—and thus a pluperfect pillar of the liberal power structure—headlined his piece, “Biden’s Rise Gives the Establishment One Last Chance.” As Brooks put it, “A Biden presidency would be a restoration or a return to normalcy.”

Okay, so maybe we should think a bit about this concept of restoration. In history, there have been many political restorations, and some worked out well—but most did not.

For instance, one of the famous restorations occurred in France in 1814. In fact, that one is of particular interest, because it ties into a much more recent historical incident, namely, the 2016 eruption of the Deplorables.

Every Breitbart News reader, of course, remembers the Deplorables. The word as a proper noun comes from the insult hurled by Hillary Clinton at a campaign event for rich donors on September 9, 2016. Donald Trump’s supporters, she said, were a “basket of deplorables.” 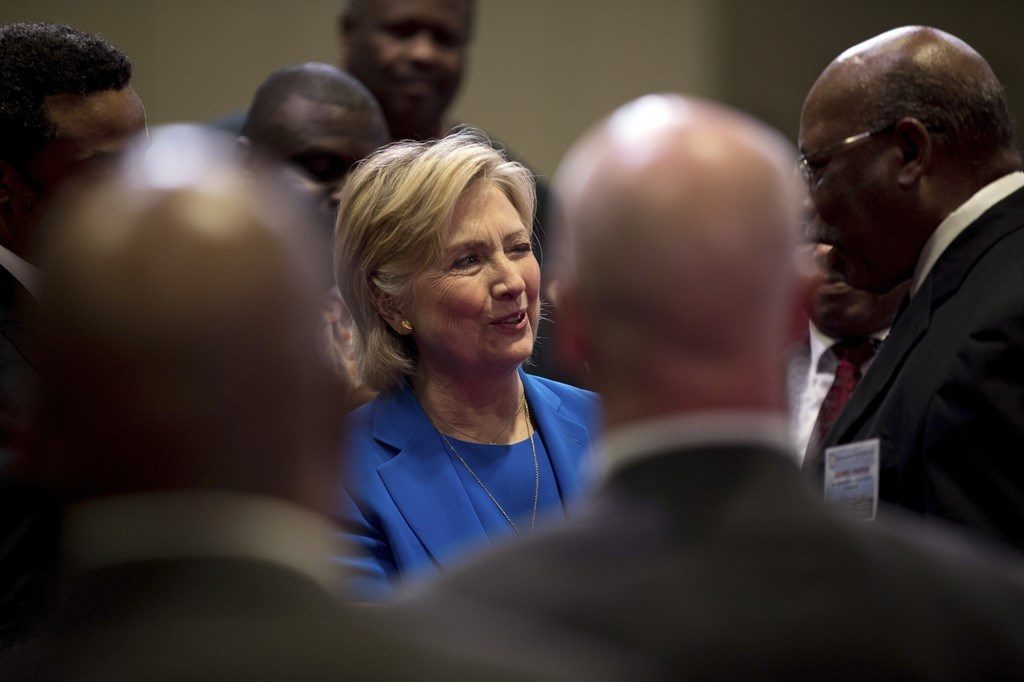 In response, Trump supporters cleverly chose to “own” the insult, dubbing themselves the “Deplorables,” wearing Hillary’s scorn like a badge of honor.  And a week later, the Trump campaign brilliantly immortalized the moment when it opened a rally with a screen image of “Les Deplorables,” then playing the song, “Do You Hear the People Sing,” from the famous musical Les Misérables.

The lyrics to that song have a rousing quality to them:

Do you hear the people sing?

Singing the songs of angry men?

It is the music of the people

Who will not be slaves again! 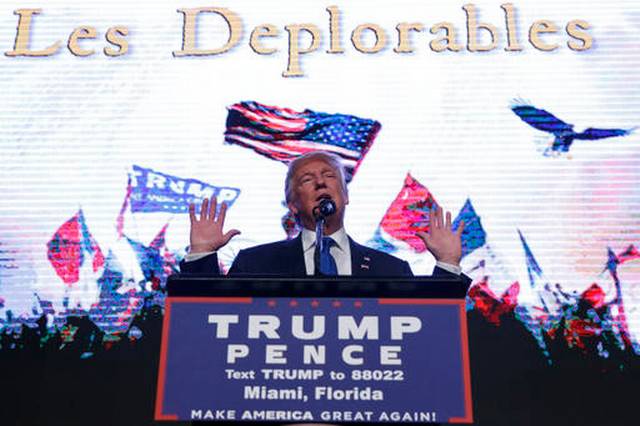 And yet at the same time, history is always instructive, providing pointers for the present day.

The French Revolution erupted on July 14, 1789, with the storming of the Bastille. The revolution toppled the Bourbon dynasty; indeed, King Louis XVI and his wife, Marie Antoinette, were soon guillotined.

Yet by 1814, the Revolution had run its course, having been militarily defeated by a broad coalition of European powers, including Britain, Prussia, Austria, and Russia. These foreign armies brought the surviving Bourbon family members  back from exile and restored them to power in Paris. This time, the king was Louis XVIII, the younger brother of the guillotined king, now himself an old man of ill health.

Louis, propped into power by conquering and occupying armies, tried to pretend that all the events of 1789-1814 were just a blip, and that the French people still loved Le Roi. As was said of the revived regime, “They have learned nothing, and forgotten nothing.” That is, the restored king and his reactionary ministers thought little about reform—and instead thought a lot about revenge.

The restored leaders purged the national government of revolutionary holdovers; in fact, by the hundreds, old revolutionaries were hunted down and killed, in the so-called White Terror.

The Execution of Marshal Ney, 1868 painting by Jean-Léon Gérôme

Not surprisingly, for the French people, all these events were confusing, jarring, and polarizing. Within the population, royalists cheered the king and hoped to bring back the “good old days.” Yet at the same time, republicans mourned the revival of the hated ancien régime.

Soon, there was open rebellion against royalty, and then another rebellion, and then another.  Some of these uprisings were partially successful, while others were not. However, in the end, royalty was defeated, and the last king fled into exile in 1848.  So we can see that the restoration was only temporary.

Thus we come to the stormy history that serves as the backdrop to the 1862 novel Les Misérables, by the Frenchman Victor Hugo—and so, as well, to the 1980 musical of the same name.

The Les Mis saga is set in the early decades of the 19th century, from the restoration of the monarchy to a rebellion against it in 1832. It’s that rebellion, in the streets of Paris, that serves as the climax to the Les Mis drama—as exuberant rebels manned the barricades, and grim soldiers shot them down. That’s right, the rebels were defeated in 1832, even though they might have had a strong song. However, a decade-and-a-half later, another rebellion would succeed, bringing the monarchy to its close.

So we can see: For 34 years, 1814 to 1848, France teetered on the verge of one uprising or another. During those decades, both royalists and republicans had their moments in the sun—and their times of darkness.

So now we’re starting to see the parallels, then and now.

If we skip ahead a couple of centuries, from France to America, we can recall that in 2016, the old regime of Barack Obama came to a close, when would-be Queen Hillary was defeated by Donald of the Deplorables.

Four years later, in 2020, Joe Biden, the crown prince in the Obama era—and a blue-blooded political royal for decades prior to that—is making his bid to regain the throne and restore the old kingdom.

To put this another way, Biden would love to be, in effect, the Louis XVIII of America, the man who came back from exile and reclaimed power for the old regime.

Indeed, just as the Bourbon kings of yore returned to their beloved Versailles palace, so Biden would love to come back into the White House, bringing with him all his Obama and Clinton friends. In fact, since Biden was first elected to the U.S. Senate in 1972, he has a lot of old-guard friends going way back—all the way back to the McGovern-Carter era.

It’s a safe bet that a lot of old guarders will want jobs in a possible Biden administration, so that they can, among other liberal missions, purge Trump Deplorables in the government. (And yes, the Deep State will eagerly rise up to assist the Bidenite restorationists in making a clean sweep.)

Of course, we don’t yet know what will happen to Biden in 2020. Indeed, we don’t even know for sure that he’ll win the Democratic nomination—although he’s now the strong favorite, especially since all the Obama aristocrats have rallied around around him. (As we also know, the Bidenites wish to crush not only Trump and his Deplorables but also Bernie Sanders and his Comrades; the Bidenites—and others—regard Sanders, of course, as a second Robespierre, he being the notoriously cruel French revolutionary who unleashed the Reign of Terror.)

Yet even if we don’t know the future, we do know the past. So for the time being, maybe the best thing to do is wrap up the history of Les Mis-era France, and speculate on one possible scenario for today’s America.

Louis XVIII had some notably bumpy moments as king, and yet he survived them all; in 1824, he died peacefully in bed. In other words, he had a decade on the throne—not bad.

On the other hand, Louis’ successor, Charles X, was less fortunate; he was overthrown in 1830, although the monarchy itself survived, as the scepter of power was passed to a royal cousin, Louis Phillipe. For his part, King Louis Philippe put down various rebellions and coup attempts—including that one in 1832—until he was finally forced to abdicate in 1848.

So we can see: In the wake of the French Revolution, the French Restoration was spotty and iffy. In the end, it lasted only 34 years; in the long eye of history, that’s a blink—although, of course, to those living through that time, they were, in fact, full years.

Thus we have the possible prospect for Joe Biden. It’s possible, yes, that he could become the 46th president. He’s ahead in most polls, even those taken before his recent surge—and before the Duke of Bloomberg committed to spending, maybe, a billion dollars on his behalf.

Yet if Biden does win, when he’s sworn in, he’ll be 79-years-old. And as we know already, the decades have worn down his cognitive capacity.

So a Biden presidency in the early 21st century might be reminiscent of Louis XVIII’s reign in the early 19th century. That is, an old man, long past his prime, sits uneasily on a reclaimed throne, even as the populist Deplorables gather their strength, plotting their next move.

In the meantime, what was said of the revived royals could be said of the revived Democrats if they win this year: “They have learned nothing, and forgotten nothing.” That is, they’ll be full of high regard for themselves, and full of low contempt for their enemies.

We should remember that even Biden, the supposed nice guy, sounded like Hillary when he said in 2018 that Trump supporters are “virulent people” and “dregs of society.”

So absolutely, with a Democratic regaining of power this year, there’d be lots of purging and score-settling in the years to come.

More broadly, we might ask: Would a Biden regime be so reactionary as to bring back foreign wars, of the kind that Biden had long supported? Would it bring back bank bailouts, which Biden had also supported?  How ‘bout open borders? And more trade deals? And liberal-left judges?

Yes, there could be a revival of all that, and more, because many old liberals are now new progressives. Thus the self-declared “Middle Class Joe”—newly woke, if not always awake—tweeted on January 25, “Let’s be clear: Transgender equality is the civil rights issue of our time. There is no room for compromise when it comes to basic human rights.” By now we know what that means in terms of school- and workplace bathrooms, student athletics, and publicly financed sex-change operations, just for starters.

In fact, a look at the Biden campaign’s “vision” page shows that the candidate has, in fact, many plans for bringing back the good old days of liberalism, as well as the newer hip leftism, including a Thunbergian environmental policy. And while a hypothetical President Biden might well forget some of his plans, his staffers will be there to remind him—or simply do what they please in his name.

So if he gets that far, this new (actually, quite old) possible president could have a hard time in office. After all, the Deplorables won’t have gone anywhere; they’ll still be ready to rise up. Indeed, the worldwide tide of history is with the populists and nationalists.

As we have seen, the restored kings of France had a hard time, too—a restoration is not an easy thing. That’s why the restored French kings didn’t last long. (Of course, that wouldn’t necessarily be something that Biden himself has to worry about; his historical doppelgänger, Louis XVIII, lasted, after all, nearly a decade on the throne.)

So we might exit where we entered, citing the words of that Establishment pillar, David Brooks. The New York Times man is avowedly pro-Biden, albeit not without some nagging concerns. As he further wrote in that March 5 column, a Biden administration would have to address problems that have festered for decades. And if the restored system can’t solve those problems, Brooks concluded, “Then that system will be swept away.” (Do you hear the people sing?)

Once again, we can’t know the future.  But since we know the past, we can at least learn from what happened in long-ago France.

And so we know that reactionary restorations are doomed to failure. It’s just a matter of time.