Purdue campaign issues statement saying election is “exceptionally close” and “will require time and transparency to be certain the results are fair and accurate” pic.twitter.com/xvGUyVVqDG

If Warnock and Ossoff do win, Democrats will have full control of Washington for the first time in a decade, since they lost the House in 2010.

Over the past 40 years, Democrats have controlled the White House, Senate, and House for just 4 years total.

12:35 AM: Warnock says he is honored by the faith Georgians have showed in him. “I am going to the Senate to work for all of Georgia,” he says.

.@ReverendWarnock: Tonight, we proved that with hope, hard work and the people by our side, anything is possible. @cbs46

.@ReverendWarnock: Tonight, we proved that with hope, hard work and the people by our side, anything is possible. @cbs46

Congratulations to our next U.S. Senator, @ReverendWarnock. Last January, I endorsed my dear friend in his quest to serve. Soon, he will walk those august halls & cast votes as a leader with courage, justice and integrity.

God bless you and keep you in your service to us all. pic.twitter.com/lzdDxRA5zv

Kelly Loeffler just now: "There are a lot of votes still out there and we have a path to victory."

VICTORY in Georgia must lead to transformative change across America!

Warnock's victory is pretty clearly going to wind up outside of Georgia's 0.5% recount threshold. #GASEN

No matter what happens in Georgia, the fact that these races are so close brings so much hope for the power of organizing, persevering and just plain old believing. That’s a lesson we must not forget in Texas.

With new votes joining the tally, we are on a strong path. But even while we wait for more, let’s celebrate the extraordinary organizers, volunteers, canvassers & tireless groups that haven’t stopped going since Nov. Across our state, we roared. A few miles to go…but well done!

People talk a little bit too broadly about the athletes' social movements. The WNBA players have generally been really far ahead of the curve, and beyond that, extremely organized. I don't think there's any question they helped propel Warnock in his race for the Senate

The bottom line in Ossoff/Perdue: Perdue is outperforming Trump in suburbs w/ lots of country club type Rs (no surprise).

But he's underperforming Trump in heavily Black areas, where there's a slight but significant drop-off in White turnout relative to Black turnout. #GASEN

Warnock is on track for victory with a greater than 95 percent chance to win, according to our estimates.
This is not a projection, but Republicans have largely exhausted their vote and Loeffler lead will not survive the remaining Democratic vote under reasonable assumptions pic.twitter.com/Z2XA6jup1o

The board of elections annex building is empty. Workers say they’ll be back at 8 a.m.

Still thousands of votes to be counted here. @WJCLNews

11:05 PM: Numbers not looking good for Republicans in DeKalb.

Gabe Sterling says the reason for the DeKalb discrepancy is that a tired election mixed up the 1 and 7. Numbers transposed. 171K votes left to count.

ex. of an unlikely error: 'what if the dekalb county vote is 'actually' in, unbeknownst to us.' we humans know that's not so, but those of you who may remember NC on election night know that the needle can be tricked into that if some county enters their data wrong, etc.

A big chunk of Forsyth County (Atlanta exurbs) has come in and it's not awful for Republicans. But probably not quite what they needed to make up for deficits elsewhere.

Less than 40% is in from DeKalb County (partly in Atlanta) and Forsyth County (a very R part of Atlanta metro area). Savannah (Chatham County) and Augusta (Columbia County) also are at 40% or less. Clarke County (home to Athens and UGA) is only at 42% in. https://t.co/9RJTRmNXuK

The New York Times needle is moving ever so slowly leftward, with Warnock moving to +1.7 and Ossoff +1.0

Beyond the needle, it's getting hard to see how Republicans win either race in Georgia tonight. pic.twitter.com/tgBLMGOwnh

That's about 90% of the Rockdale turnout from November, when Biden carried it with 69.9% and Ossoff with 69.2%

9:25 PM: From Boyle in Atlanta: As Fox News on televisions here in the ballroom at Grand Hyatt in Buckhead Atlanta show Loeffler now at 50-50 tie with Warnock, the crowd goes wild again. Thousands are packed in here with most on their feet standing watching the returns roll in.

From Boyle in Atlanta: The crowd is ecstatic now as Loeffler takes her first lead of the night over Warnock.

Across the 62 counties with 99%+ reporting (most of which are GOP-friendly), both Ossoff and Warnock are running slightly ahead of Biden's performance in November. Once more results come in from Atlanta, it's not hard to imagine those leads extending further. pic.twitter.com/2X4FLy9yM1

9:17 PM: From Boyle in Atlanta: “As Perdue takes his biggest lead of the night, at about 15k votes, the crowd goes wild and the packed ballroom now has everyone standing in front of the stage watching the results pour in.”

With 60% of estimated vote in Georgia:

Encouraging signs for Dems in 4 of the 7 largest GA counties. Running up the score compared to Biden (who still won without such large margins).

8:30 PM: Georgia Governor Brian Kemp, on stage at the Loeffler/Perdue watch party, says: “We are the red wall trying to stop socialism in this state.” He also thanks the volunteers, door knockers, and donors.

Another worrying underperformance for Rs: Early County (SW GA). Was Trump+5 and Perdue+11 in November but both Perdue and Loeffler are barely scraping by there with over 90% reporting. #GASen

One thing to keep in mind is that margin shifts in rural counties (versus November) may not be representative of statewide.

For example, Democrats could outperform in most rural counties by 2-3 points but still lose if there is slippage in the Atlanta suburbs.#GASEN

Perdue/Loeffler running about even with Trump here, but turnout is just 90.3% of November levels. Dems could plausibly beat that in ATL.

Not a ton of votes in those counties, but every little bit helps. I'm looking at (the extremely appropriately named) Early Co., which could be a Dem flip from the presidential result.

What’s it like trying to tune out politics in Georgia right now? pic.twitter.com/tYfsQb3gBH

7:20 PM: Breitbart’s Matt Boyle on the ground in Georgia, citing a GOP campaign official with knowledge of the matter: In Hall County alone, there has been a massive increase in Election Day turnout–which significantly favors Republicans. In November, there were 15,000 approximately Election Day voters there. This time a huge surge to approximately 23,000. At an approximately 70-30 percent split favoring Republicans among Election Day voters, that represents thousands–maybe as many as 7,000 plus–extra votes for the GOP candidates this time in that one county alone as compared with November 2020. The GOP campaign source told Breitbart News that’s just one county, and expect to see similar trends across the board in several others. 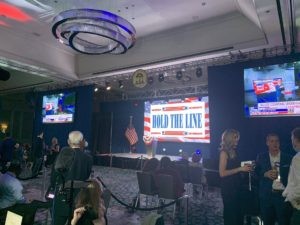 From Boyle in Atlanta: A photo of the stage here at the Perdue and Loeffler GOP victory party. Hundreds are gathering, as are all the media in town, here. Ossoff and Warnock, the Democrat candidates, are not having any in person election night event meaning that all the media in town for the election are here.

The top 10 GA counties w/ 10k+ voters where Ossoff underperformed Biden's % by the most in November:

The top 10 GA counties w/ 10k+ voters where Dems underperformed Biden by the most in November's Loeffler special:

7:00 PM: Most polls now closed. A few precincts will be open for 40 more minutes.

_____ Positions on issues are about right:

One part of Georgia to watch in the #GASen runoffs tonight is an area I like to call "Ruby Red North Atlanta." Cherokee, Forsyth and Hall are the three largest Trump counties in the state. Loeffler+Perdue need high turnout here if they want to win tonight. #ElectionTwitter #gapol pic.twitter.com/d0C0T27qcU

As the hours tick down on #GASenateRunoffs, @ReverendWarnock is doing “marathon call-ins” to Black talk radio, gospel radio in South Goergia & local TV stations. @ossoff is in the middle of 25 last-minute interviews with local press.

DeKalb election day turnout approaching 46k, if these figures are accurate, putting it on track to surpass the general. The big question, of course, is whether this simply augurs for a big D turnout (as this is a very D county) or a big Election Day turnout (the key to the GOP)

A few thing I'll be looking for in GA:

Turnout in Forsyth County (Rs) and Clayton Clayton (Ds). I suspect the margins mirror November, but these are base rich voting centers.

% of Black voters compared to November.

5:59 PM: On CNN, Stacey Abrams says Democrats are on the way to a “permanent Democratic majority” in Georgia, which she says is now firmly a “battleground state.”

Abrams also says Georgia Secretary of State Brad Raffensperger is “no hero” because he is not on the side of voters even though he is defending the election he ran last November.

The partisan divide in confidence in the Georgia elections in these @CNN early exits is staggering pic.twitter.com/UeUNdaXhP6

Georgia voters—If you're in line before the polls close at 7 pm, stay there. You have the right to vote, no matter how long it takes. If you have questions, call the Georgia voter protection hotline at 1-888-730-5816. Let's bring this home.

— 68% “very/somewhat worried” they or family member will contract Coronavirus/ 31% “not too/not all” worried.

@CNN exit: which is more important to do now?

Trump urging Republicans to get out the vote:

GEORGIA! Get out today and VOTE for @KLoeffler and @Perduesenate! pic.twitter.com/YKiSx7d7lp

Georgia Gov. Kemp and Vice President Pence urging Republicans to get out the vote and defend the majority:

The polls close in two hours. RT to help Get Out The Vote for @KLoeffler and @Perduesenate! #gapol

It’s Election Day in Georgia! Get out and VOTE to DEFEND THE MAJORITY! VOTE for @Perduesenate and @KLoeffler! #HoldTheLine 🇺🇸 pic.twitter.com/uulmKMYYKq

2020 ends and 2022 begins:@staceyabrams has bought TV time in GA to ensure ballots are counted and cured after tonight

Via a media buyer > pic.twitter.com/lErzUwLRyL

Loeffler and Perdue, in a joint statement, say the election will “very close.”

Statement from Loeffler and Perdue teams at 3:30 reminding people to go vote pic.twitter.com/V45fSMLK0V

GEORGIA, what we know:

Based on run-off early voting, if that holds, it would mean 773,343 votes likely in-person today.

That's right around the *minimum* day-of turnout the GOP is hoping for, assuming that votes cast today favor them.

We are out here in these streets! Strolling to the polls! Shoutout to @akasorority1908 being on the ground with us today! #LetsDoItAgain #BlackVotersMatter ✊🏾 pic.twitter.com/xchJNHpsDq

On election night, the votes of Albany and the surrounding 'Black Belt' made a strong contribution to Pres. Elect Biden’s narrow win over Pres. Trump in Georgia. That area may prove to be even more pivotal in this week's Senate election. #gapol https://t.co/KKYAzAf3sD

Because there’s not enough else happening today in GA…@GaDPH announces the first confirmed Georgia case of the new more contagious COVID-19 strain pic.twitter.com/2EhVY09g1G

President-elect Joe Biden’s closing message to Georgians: Vote for Democrats to get $2,000.

Biden says $2,000 checks to ‘go out the door immediately’ if Democrats win in Georgia https://t.co/W7ab9we1AU