Judge Bruce Schroeder ruled in favor of the defense’s request to have a firearms charge against Kyle Rittenhouse dismissed in Kenosha County Court on Monday morning.

On Friday, as Breitbart News reported, Judge Scroeder appeared skeptical of the weapons charge, saying that the Wisconsin statue was unclear about exceptions for those over 16 years old but under 18 years old if the gun were a long-barreled rifle.

However, the judge did not throw out the charge, partly because he could not remember whether the length of the rifle Rittenhouse used had been introduced into evidence.

On Monday, as lawyers for the prosecution and the defense argued over the final draft of the jury instructions, the defense again raised the issue of the weapons charge, noting that the gun had been measured in court and that the police detective on the witness stand had confirmed that it was not short-barreled. 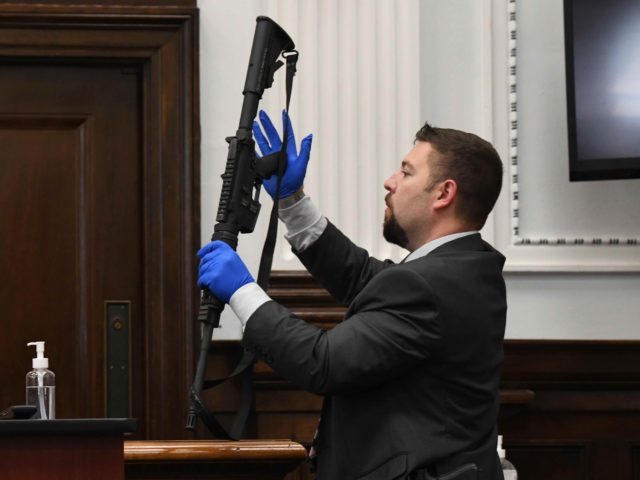 KENOSHA, WISCONSIN – NOVEMBER 02: Dominick Black, who bought Kyle Rittenhouse’s AR-15 rifle for him because Rittenhouse was underage, is shown Rittenhouse’s rifle by Kenosha Police detective Ben Antaramian during the Kyle Rittenhouse trial at the Kenosha County Courthouse on November 2, 2021 in Kenosha, Wisconsin. Rittenhouse faces seven charges including one count each of First Degree Intentional Homicide, First Degree Reckless Homicide, and Attempted First Degree Intentional Homicide after he shot three people, two of them fatally during the unrest that followed the shooting of Jacob Blake by a Kenosha police officer. (Photo by Mark Hertzberg-Pool/Getty Images)

The judge then indicated that the gun ought to be measured. “If the barrel length is less than 16 inches, or an overall less than 26 inches, then I’ll deny the [defense] motion; if it does not meet those specifications, then the defense motion will be granted,” the judge said.
“We are not disputing that the barrel length is appropriate,” prosecutor James Kraus said, in a defeated tone, effectively admitting the rifle was not short barrel.

Judge Schroeder dismissed the charge. The remaining charges concern murder and attempted murder. Critics have opined that Rittenhouse’s argument that he acted in self-defense would defeat those charges, and that the weapons charge posed the only serious chance of a conviction — if the statute applied.