“The sole reason for the scale of the humanitarian emergency” in Ethiopia’s Tigray region currently “is that the coalition of Ethiopian Federal forces, Amhara regional forces, and Eritrean troops are committing starvation crimes on large scale,” the report, published by Tufts University’s World Peace Organization on April 6, states.

The Ethiopian federal government has been engaged in a military stand-off with the separatist Tigray People’s Liberation Front (TPLF) since November 4, when Addis Ababa accused TPLF forces of attacking a federal military base in Tigray. Over 60,000 Ethiopians have fled the fighting, either for other parts of Ethiopia or neighboring states, such as Sudan. The conflict has created a new hunger crisis in the region, as many of the refugees have no access to food. Ethiopian and Eritrean soldiers are responsible for precipitating this hunger crisis through their systematic “starvation crimes,” which include looting grain stores and intentionally burning harvests, the new report alleges.

Fighting across Tigray has damaged most of the region’s energy sources and left the area under an electricity blackout. The lack of power means that mechanical grain mills are down.

“Even if farmers have grains, in many villages and towns, there are no operating mills,” Belgian professor and geographer Jan Nyssen told the authors of the report in late January. “Thus people can’t make bread or tayta (fermented flatbread) and many are living on roasted barley and whatever else they can find.” 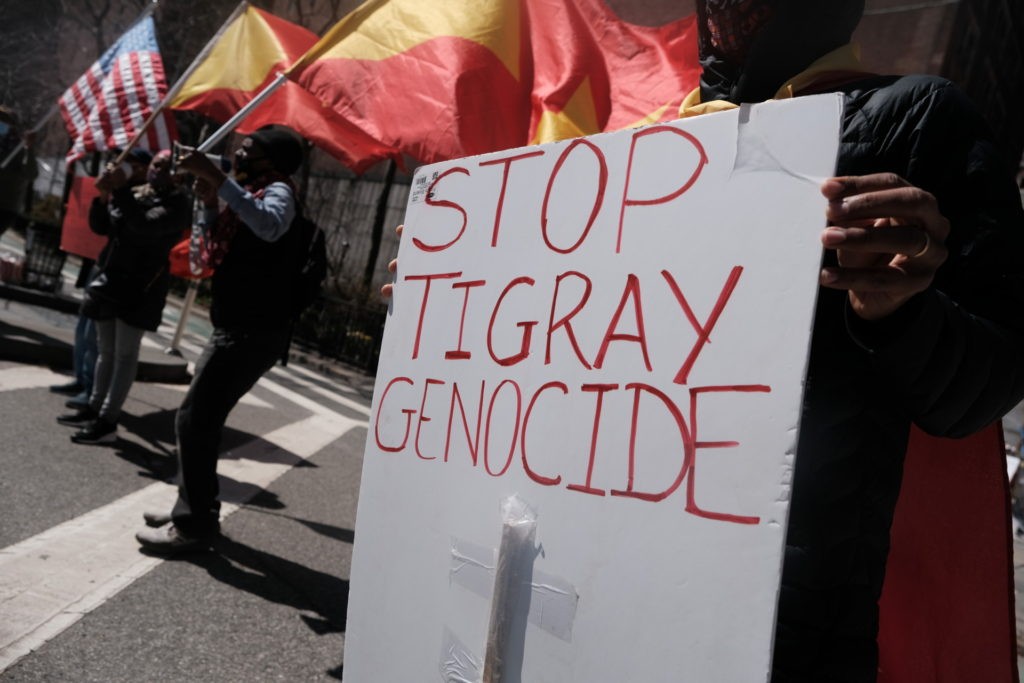 Tigray protesters gather outside the United Nations in New York City. The war-torn northern Ethiopian region has been the location for a conflict between pro-government and local fighters that has resulted in thousands of refugees spilling over the border into Sudan. Following months of denial, Prime Minister Abiy Ahmed of Ethiopia admitted this week that Eritrean troops had been fighting in Tigray. The protesters are calling for the U.N. to take action against the Ethiopian government. (Spencer Platt/Getty Images)

“Traditional grinding is done between two stones shaped for that purpose, but many homesteads do not have such stones anymore, as mechanized grain mills have been built all over the place. The situation is even more difficult for the internally displaced persons (IDPs) who have no way to obtain such grinding stones,” Nyssen said.

“Two sources tell us that people go to the bushes and collect branches and leaves of non-toxic thirst-quenching plants such as sorrel (Rumex nervosus) in order to have at least something in their stomachs. In some places there are not even matches available to light a fire for cooking,” he added.

The paper cited instances of looting, considered an act that contributes to a starvation crime in Ethiopia, from a February report by Amnesty International, which detailed an attack on the city of Aksum by Eritrean soldiers from November 28-29.

“Residents said Eritrean soldiers stole sugar and flour from a store called Guna Trading; that they robbed May Akko, a large community store, of truckloads of sugar, cooking oil and lentils; that they took flour and animal fodder from the Dejen Flour Factory, and that they looted the budget student grocery store of the university,” Amnesty International reported on February 26.

According to the World Peace Organization report:

Article 270 of the Ethiopian Penal Code of 2004 is concerned with ‘war crimes against the civilian population’. Paragraph (i) specifically prohibits ‘the confiscation, destruction, removal, rendering useless or appropriation of property such as foodstuffs, agricultural areas for the production of food stuffs, crops, livestock, drinking water installations and supplies and irrigation works, health centres, schools.’ Additionally, Article 273 prohibits pillage, piracy and looting.

“Intentionally using starvation of civilians as a method of warfare by depriving them of objects indispensable to their survival, including wilfully impeding relief supplies as provided for under the Geneva Conventions” constitutes a war crime in international armed conflicts, according to the International Criminal Court.