Buhari’s spokesman issued a statement on his behalf on December 21 expressing the president’s “grief over the heart-wrenching murder of 45 farmers and scores injured following renewed hostilities in … Nasarawa State.”

Armed Fulani herdsmen launched attacks on Nasarawa farmers of the Tiv ethnic group from December 17 through December 19. The violence ensued over the recent killing of a Fulani kinsman in Nasarawa, which the cattle herders blamed on local Tiv farmers, according to Agence France-Presse (AFP).

Buhari denounced the 48 hours of bloodshed as “senseless and barbaric” in his statement Tuesday. He said his administration would “leave no stone unturned” in bringing the perpetrators “to justice.”

President Buhari is himself a member of the Fulani ethnic group and a Muslim. Observers of Nigeria’s worsening Fulani militant crisis have criticized Buhari for his failure to meaningfully curb the largely Muslim group’s attacks on predominantly Christian farmers.

“In 2015, President Muhammadu Buhari .. came to power, and the situation went from bad to worse,” Salihu Musa Umar — the founder of Africa’s Farmers and Herders Initiative for Peace and Development — told AFP on April 28.

“Many farmers have accused Buhari’s government of bias – or worse, of stoking the violence for political gain,” the news agency noted at the time. 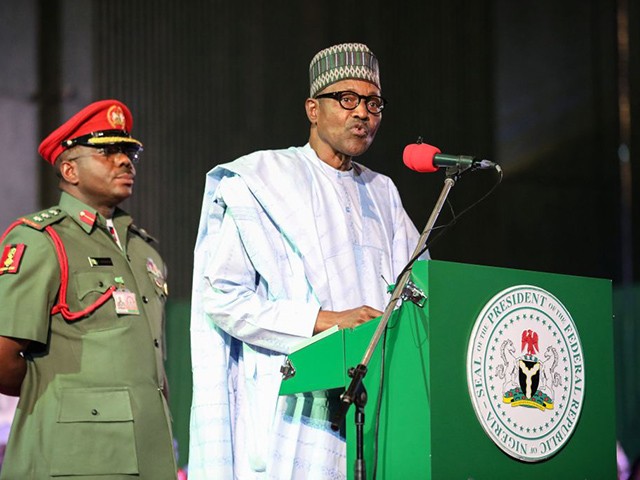 While ethnoreligious tension between Fulani nomads and other Nigerian agriculturalists has existed for centuries, poor management of the situation by Buhari’s government has allowed the conflict to reach a boiling point in recent months. Increased droughts across northern Nigeria have reportedly inspired Fulani herders to venture “further south into the farmers’ territory, creating one of the world’s deadliest conflicts, as both sides compete for scarce resources,” AFP detailed in late April.

“Nigeria’s Middle Belt has been struck this year by a spike in farmer-herder violence, which in 2018 was six times deadlier than the Boko Haram insurgency, killing more than 2,000 people,” the news agency reported, citing data from the International Crisis Group.

Violence arises most often when nomadic Fulani allow their livestock to illegally graze on Nigerian farmers’ land, which may be privately owned or owned by individual Nigerian states.

“When villagers try to turn the pastoralists away, violent altercations are common,” the Economist reported of the Fulani-farmer conflict on May 22.

“Cattle rustling, a common vice, adds to the volatility. Raids and reprisals sometimes lead to villages or nomadic encampments being burned, and herders or farmers killed,” the newspaper acknowledged.

“In April, for instance, 83 people died in what appears to have been fighting between locals and pastoralists in three villages in Zamfara state,” the publication recalled.

The U.S. State Department, under the administration of U.S. President Joe Biden, removed Nigeria from its list of countries with religious freedom concerns on November 17. The action came less than one year after the administration of former U.S. President Donald Trump added Nigeria to the list on December 7, 2020, for the first time. Then-U.S. Secretary of State Mike Pompeo designated Nigeria a country of concern under the U.S. International Religious Freedom Act of 1998 “for engaging systematic, ongoing, egregious religious freedom violations.”