A group of scientists called the Malabo Montpellier Panel published a report in May that encouraged Africa to develop a “sustainable bio-economy” through such innovative techniques as making muffins and meatloaf out of flies.

The report, titled Nature’s Solutions: Policy Innovations & Opportunities for Africa’s Bioeconomy, is the latest installment in the bizarrely persistent environmentalist craze to make people eat bugs. Waves of mainstream media articles about the value of insects as a “sustainable” source of protein appear every year, usually laced with complaints about the volume of greenhouse gas emitted by the livestock industry and from the posteriors of the livestock themselves.

For example, the New York Times extolled “The Joy of Cooking (Insects)” in February 2022. Time magazine explained “How Humans Eating Insects Could Help Save the Planet” exactly one year previously.

The Malabo Montpellier Panel argued in May that “rising costs of food, fuel, and fertilizer, as well as the longer-term impacts of [Chinese coronavirus] and climate change” make Africa the perfect laboratory for creating a new type of continent-wide “bio-economy” that would putatively feed its exploding population and create millions of jobs.

Some of these proposals are relatively modest, such as developing better methods of harvesting popular fruits and vegetables, while others might prove to be tougher sells, like pounding swarms of lake flies into “a range of edible foods like crackers, muffins, meat loaves, and sausages.”

“In terms of bioenergy, coffee husks and pulp are being turned into biogas, and fruit waste is being transformed into a bio-alkanol gel that burns without smoke or soot. This makes indoor cooking both more environmentally friendly and less harmful to health, especially for women who bear the bulk of this responsibility,” the panel argued.

The “bio-economy” concept can be rather broad, as it includes a good deal of what might be more prosaically called agriculture. Bio-economy strategies generally encourage using new technologies, frown upon fossil fuels, and stress the notion of “sustainability” by using plants and insects instead of animal products. 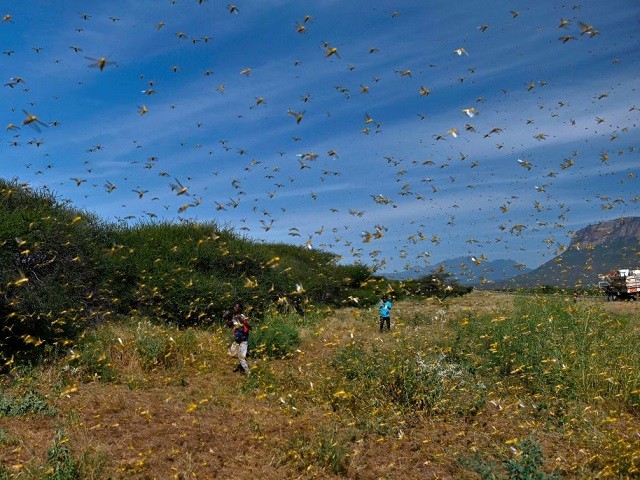 Africa’s abundant flora and fauna make it a popular testing ground for bio-economy theories, especially in the wake of the Wuhan coronavirus pandemic, widely seen as a golden opportunity for controlling and “resetting” existing economic systems.

The pandemic also caused serious problems for global shipping, which still have not entirely cleared up. Bio-economies are theoretically more self-sufficient because the necessary plants and insects are harvested locally.

South Africa, for example, assessed that its bio-economy contributed 8% of its gross domestic product and created as many as 16 million jobs between 2007 and 2020 – about 70% of it in the food and beverage industry and agricultural sector.

One of its most successful products is a mosquito-repelling candle made from the oils of an indigenous plant and now available in major retailers across the country.

“Sustainability and adaptation to a changing climate require a more judicious use of biological and ecological resources. This includes how these resources might be leveraged to generate innovative products that help mitigate climate change, conserve resources and protect biodiversity, while creating new and well-paying employment opportunities,” Malabo Montpellier Panel co-chair Ousmane Badiane told Reuters.

However, Reuters grumbled that even these bio-economy success stories tend to be small projects set aside in “protected areas without any real investment,” rather than massive regional transformations into dramatically different sustainable economic systems.

The impetus behind much of this bio-economy experimentation in Africa is lingering apprehension among the climate change community that Africa’s vast and growing population will demand the same standard of living as the Western world, consuming tremendous quantities of fossil fuel in the process.

Some African leaders have figured this out and are getting a little cross with the presumption that fighting climate change means they have to live in low-energy, bug-eating poverty forever.

The UK Guardian on Tuesday found some pushback against the demands of “experts” that Africa must “embrace renewable energy and forgo exploration of its potentially lucrative gas deposits to stave off climate disaster”:

The issue of gas in Africa is likely to prove a flashpoint at the Cop27 UN climate summit this November in Egypt. Robinson’s views, first expressed in an interview with the Guardian, sparked a row at UN climate talks in Bonn, where countries have held meetings over the past fortnight in preparatory negotiations for Cop27.

Several African countries are thought to want to use Cop27 to argue for the continent to be allowed to exploit its gas, taking advantage of the fossil fuel bonanza that has followed Russia’s invasion of Ukraine. Egypt is sympathetic, with the finance minister, Mohamed Maait, telling an audience in the City of London recently that poor countries must not be “punished”.

“We are going to continue to fight, we have fossil fuels that should be exploited. At one point, companies had plans to mine Niger’s coal. But with these measures, no banks are willing to commit. We are being punished,” Nigerian President Mohamed Bazoum complained at a business forum this week.

“Let the African continent be allowed to exploit its natural resources,” Senegalese President Macky Sall agreed. “It is frankly unbelievable that those who have been exploiting oil and its derivatives for more than a century prevent African countries from reaping the value of their resources.”

The debate was encapsulated in an exchange last week between U.N. climate envoy and former Irish president Mary Robinson, who suggested Africans should be allowed to exploit their gas reserves for electricity and clean cooking, and climate scientist Mohamed Adow, who responded that Africa “cannot rely on the failed systems of the last 200 years.”

“We must leapfrog our thinking and make the investment into distributed renewable energy systems that won’t poison our rivers, pollute our air, choke our lungs and profit only a few,” Adow insisted.

Africans cannot help but notice those “failed systems of the last 200 years” brought incredible prosperity and increased human health to the rest of the planet, and economic powerhouses like China are gleefully burning mountains of coal to power their factories while Africans are told to squeeze cooking oil out of rotten fruit and make muffins out of lake flies.