More than 200 people were killed and hundreds more hospitalized from injuries after a series of blasts devastated three churches and three luxury hotels in Sri Lanka on Easter Sunday. 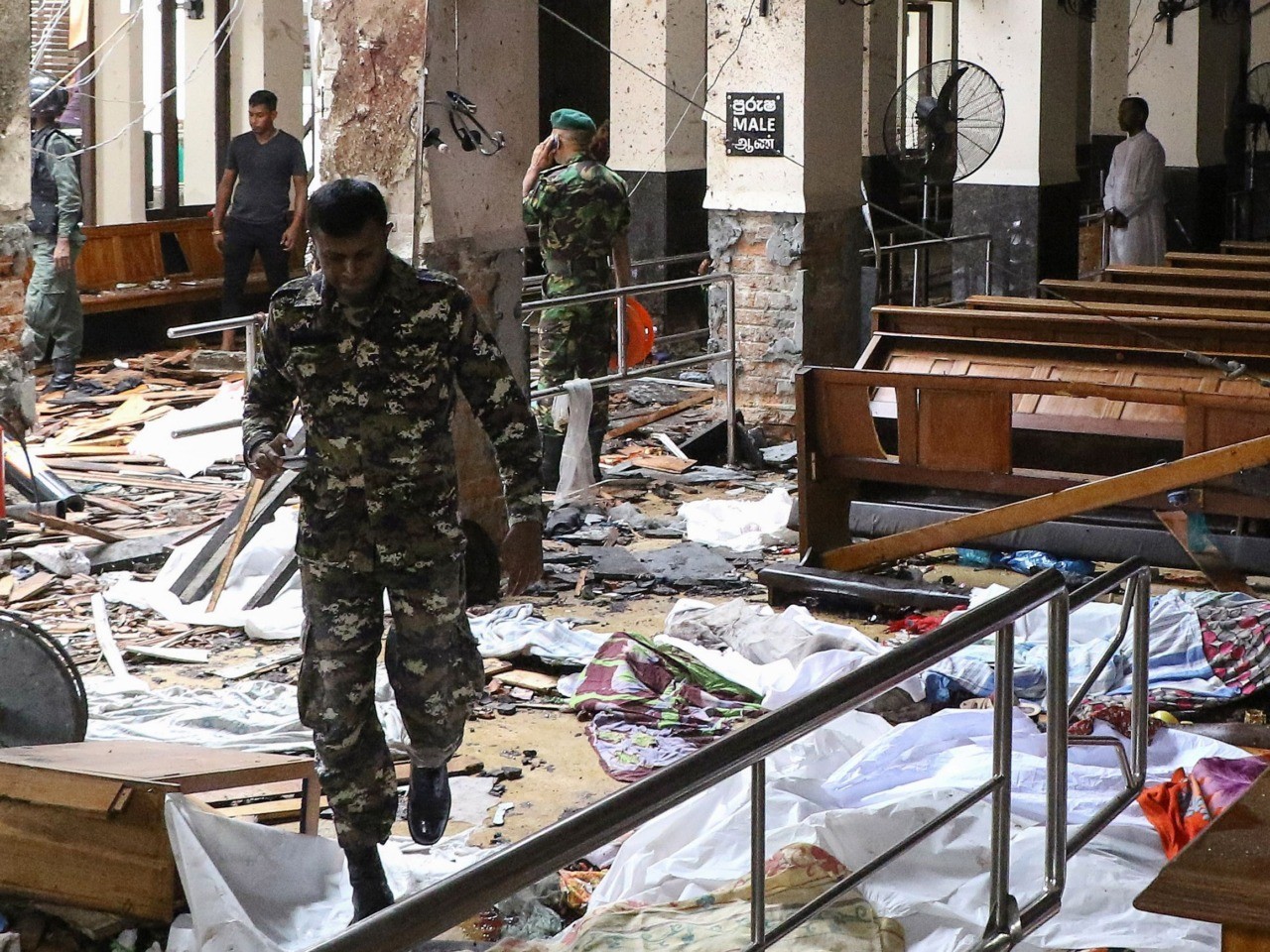 Sri Lankan security personnel walk past dead bodies covered with blankets amid blast debris at St. Anthony’s Shrine following an explosion in the church in Kochchikade in Colombo on April 21, 2019. – A string of blasts ripped through high-end hotels and churches holding Easter services in Sri Lanka on April 21, killing at least 156 people, including 35 foreigners. (ISHARA S. KODIKARA/AFP/Getty Images)

Two of the blasts were suspected to have been suicide bomber attacks, according to one official who spoke to the Associated Press (AP) on condition of anonymity. 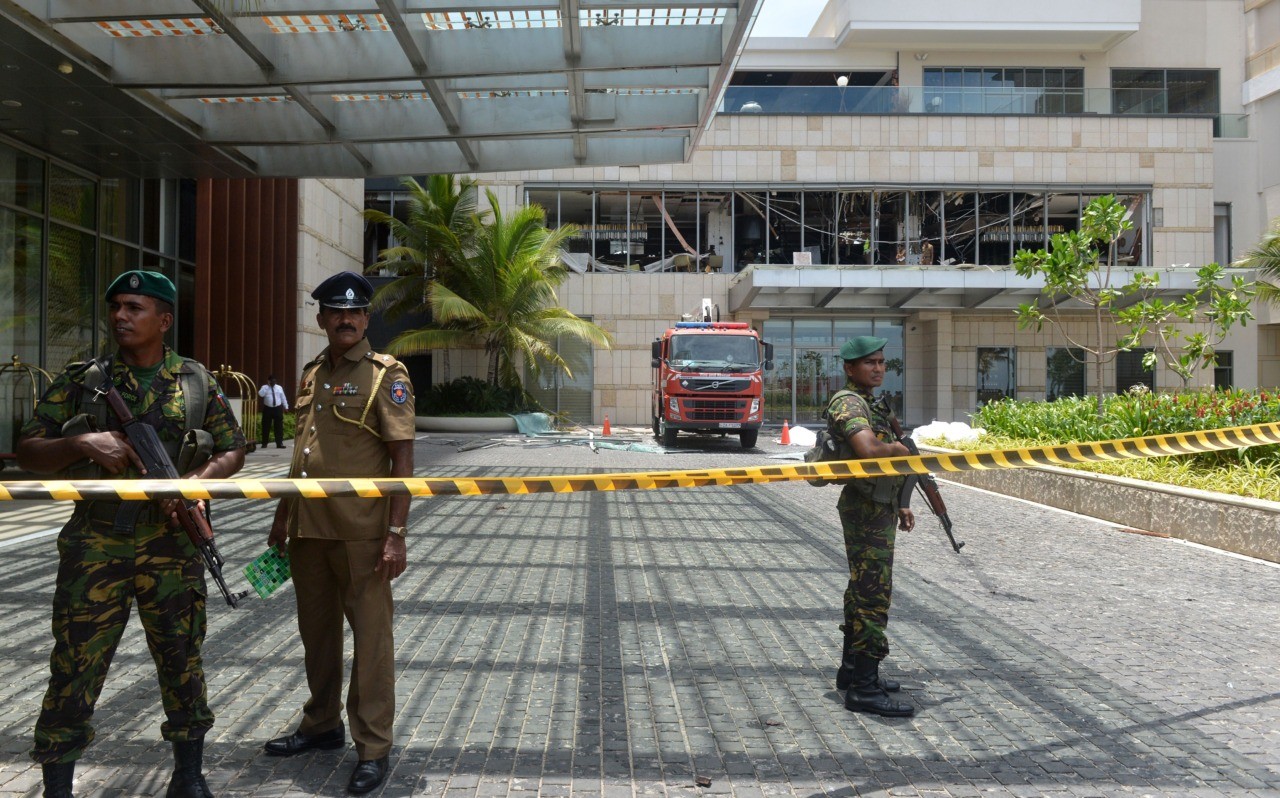 Worshippers and hotel guests were among the fatalities, the official said, in the biggest violence in the South Asian country since its civil war ended a decade ago. Nine foreigners were among the dead, officials confirmed.

The three hotels hit were the Shangri-La Colombo, Kingsbury Hotel in Colombo and the Cinnamon Grand Colombo.

In just one church, St. Sebastian’s in Katuwapitiya, north of the Sri Lankan capital, more than 50 people were killed, a police official told Reuters, with pictures showing bodies on the ground, blood on the pews and a destroyed roof. 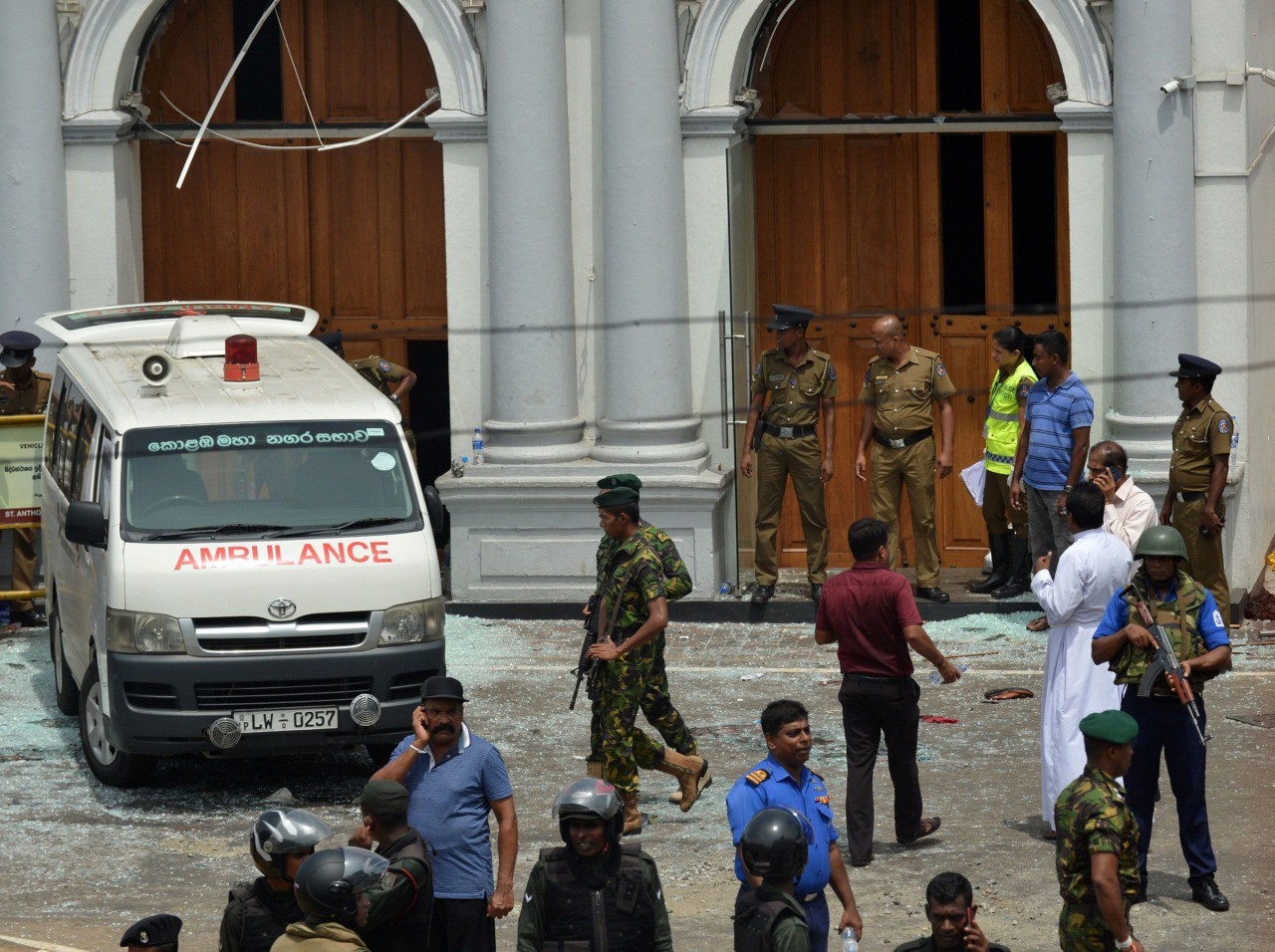 An ambulance is seen outside the church premises with gathered people and security personnel following a blast at the St. Anthony’s Shrine in Kochchikade, Colombo on April 21, 2019. (ISHARA S. KODIKARA/AFP/Getty Images) 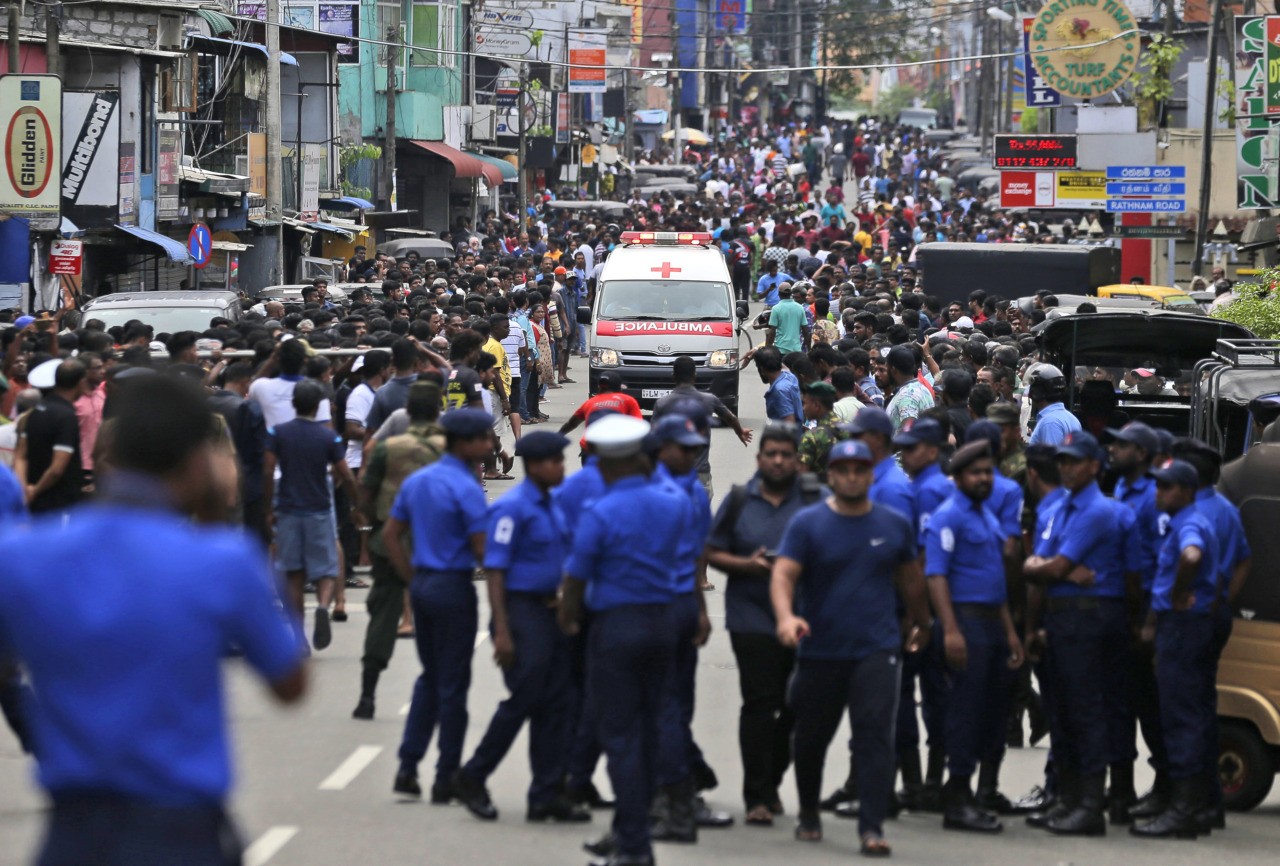 Local media said 25 people were also killed in the attack on a church in Batticaloa in Eastern Province, where more than 300 injured people were rushed to a local hospital. The three hotels where the blasts took place are in Colombo, and are frequented by foreign tourists.

“I strongly condemn the cowardly attacks on our people today. I call upon all Sri Lankans during this tragic time to remain united and strong,” he said in a tweet.

I strongly condemn the cowardly attacks on our people today. I call upon all Sri Lankans during this tragic time to remain united and strong. Please avoid propagating unverified reports and speculation. The government is taking immediate steps to contain this situation.

Photos circulating on social media showed the roof of one church had been almost blown off in the blast. The floor was littered with a mixture of roof tiles, splintered wood and blood.

The carnage has been met with an official response by Sri Lanka’s Minister of Economic Reforms and Public Distribution, Harsha de Silva.He said in a tweet, “Emergency meeting called in a few minutes. Rescue operations underway.”

Heads of Army, Navy, Airforce and IG along with Sec/Def, Sec/For Affairs meeting with @RWijewardene along with a few of us Ministers at MOD. All necessary emergency steps taken by Gov of #SriLanka. Soon official statement will be issued. pic.twitter.com/WkVQdcA5bT

He revealed he had been to two of the attacked hotels and was at the scene at St Anthony’s Shrine and described “horrible scenes”.

“I saw many body parts strewn all over,” he tweeted, adding that there were “many casualties including foreigners”. 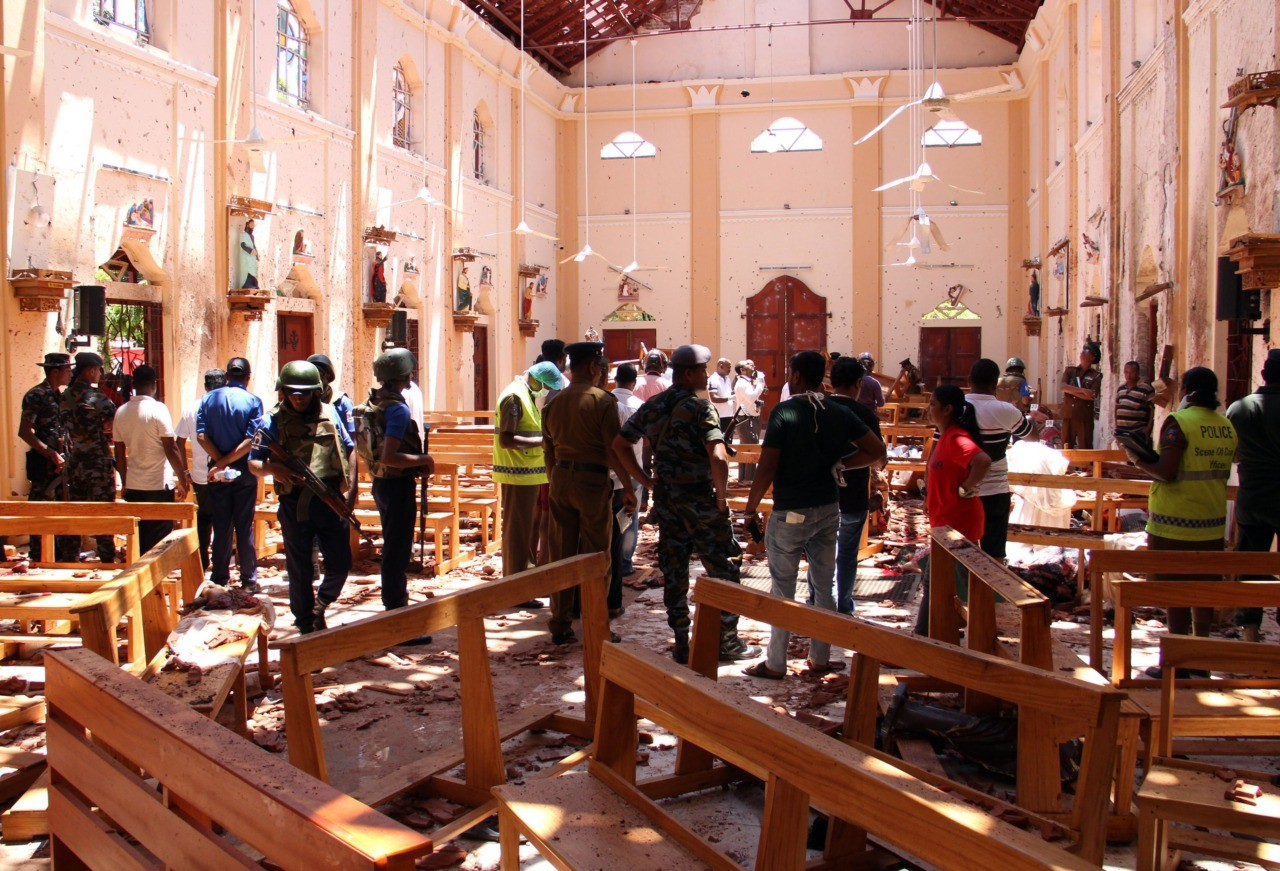 Christians make up 7.4 per cent of the predominantly Buddhist country’s total population of 22.4 million. An estimated 82 per cent of Sri Lankan Christians belong to the Roman Catholic Church.

AFP and AP contributed to this report