Subianto, who has run for the presidency on several occasions, has denied being an avowed Islamists but embraced the support of fringe Islamic groups. His campaign benefitted from social media rumors and unofficial negative campaigning accusing Widodo of being a secret Christian and communist (communism is illegal in Indonesia).

The Indonesian election commission ratified Widodo’s victory on Tuesday, revealing the results of the race giving the president an 11-point lead over the challenger. A total of 44 percent of voters, or 69 million people, supported the losing candidate. Subianto rejected the results of the election and has announced he will petition for a recount, citing alleged fraud.

According to Singapore’s Straits Times, Widodo opponents used social media to organize in anticipation of the presidential election results released Tuesday. A group calling themselves “Persaudaraan Alumni 212,” a reference to the mobs that pressured the government into imprisoning Christian Jakarta Governor Basuki “Ahok” Tjahaja Purnama for alleged blasphemy, began posting calls for “constitutional jihad” against another Widodo term regardless of the results of the election.

The calls attracted 2,000 people to the headquarters of the national election institute in Jakarta, who began burning vehicles and garbage, throwing Molotov cocktails and rocks to block police activity. Police responded with tear gas and rubber bullets to disperse the crowd. 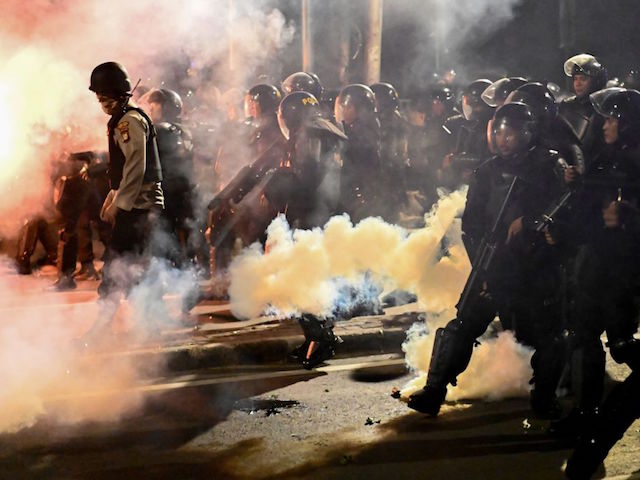 Indonesian police shoot tear gas to disperse protesters during a demonstration outside the Elections Oversight Body (Bawaslu) in Jakarta on May 22, 2019 (BAY ISMOYO/AFP/Getty Images) 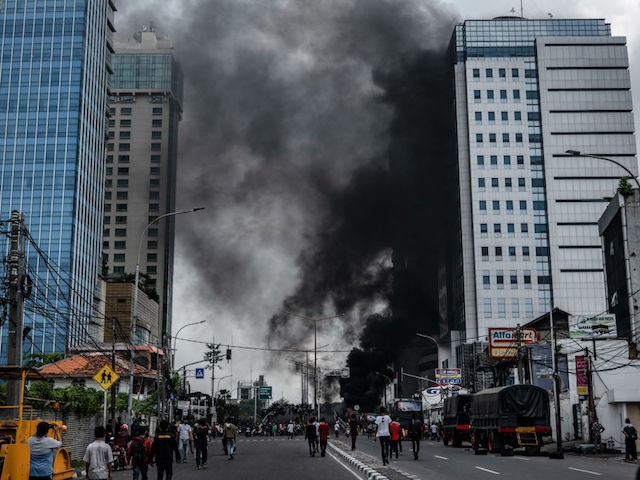 Smoke rises up from police bus burns by protesters during a demonstration after the official government election results were announced on May 22, 2019 in Jakarta, Indonesia. (Ulet Ifansasti/Getty Images) 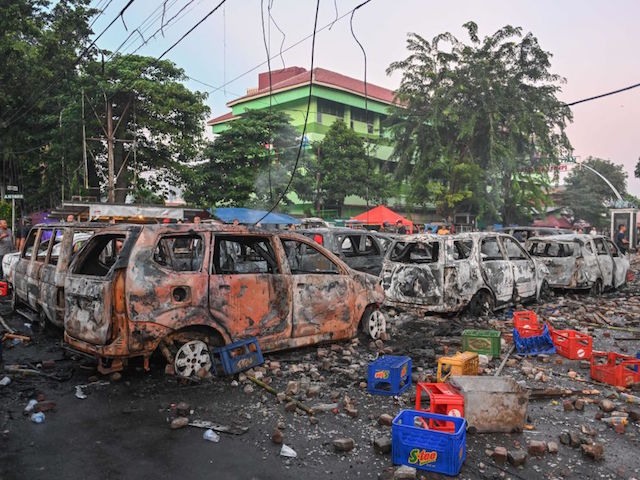 Carcasses that were burned by the mob are seen during an overnight demonstration near by the Elections Oversight Body (Bawaslu) in Jakarta on May 22, 2019 (BAY ISMOYO/AFP/Getty Images)

Jakarta Governor Anies Baswedan confirmed six dead and 200 injured as of 9 a.m. local time Tuesday, including, according to the Jakarta Post, a 17-year-old dead.

“There are indications that most of the rioters were from outside Jakarta and that they had been paid [to riot],” Police spokesperson Insp. Gen. M. Iqbal told reporters on Wednesday. “We have detained 58 people suspected of being provocateurs of the riot.”

Iqbal claimed that there were two organized groups of protesters, one peaceful and one violent. The peaceful protesters gathered outside of the election commission’s headquarters, broke the Ramadan fast together when the sun went down, and went home. “But then, around 11:00 p.m., another crowd of unknown origin arrived and started to damage the security barriers,” he said. 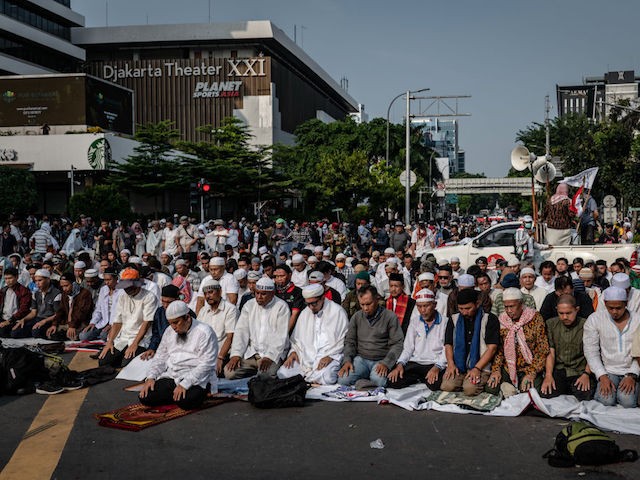 Indonesian muslim protesters pray in front of the Elections Supervisory Agency (Bawaslu) after the official government election results were announced on May 21, 2019 in Jakarta, Indonesia. (Ulet Ifansasti/Getty Images) 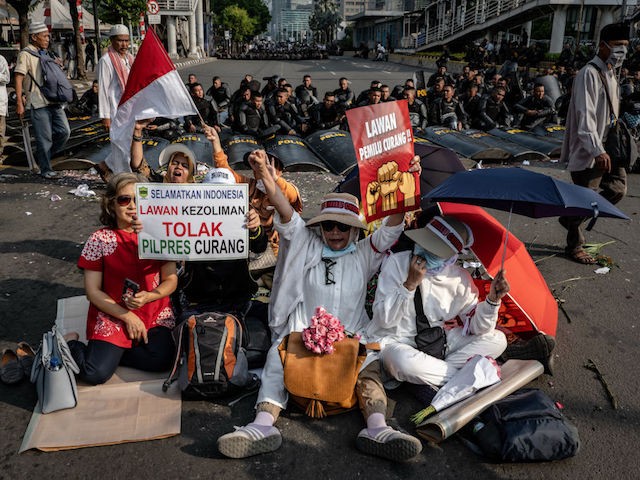 Protesters shout during a demonstration in front of the Elections Supervisory Agency (Bawaslu) after the official government election results were announced on May 21, 2019 in Jakarta, Indonesia. (Ulet Ifansasti/Getty Images)

Iqbal said police believed the rioters were organized and paid for, citing the discovery of “an ambulance with a political party logo that was filled with rocks and other tools … [and] envelopes full of money.”

Subianto’s campaign denied having any involvement in the riot. A spokesman accused unnamed “provocateurs” of staging the violence and urged, “the police should not use weapons and should not arrest the protesters. The public should not be easily provoked.” 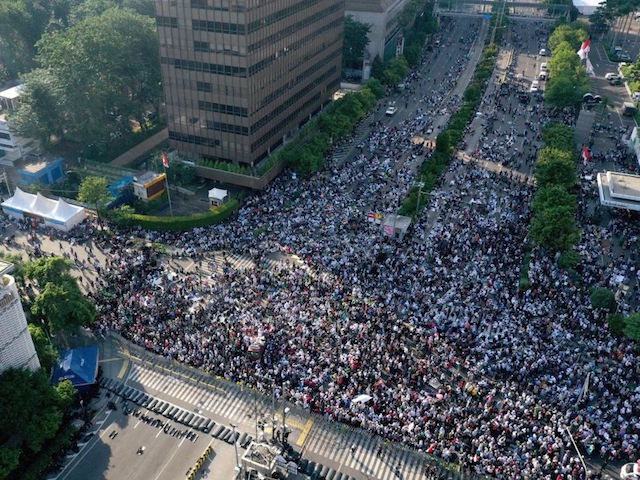 An aerial photo shows protesters gathered to demonstrate against Indonesia’s President Joko Widodo’s victory in the recent election in Jakarta on May 22, 2019. (BAGUS SARAGIH/AFP/Getty Images)

“I am open to anyone who wants to join hands to build and develop this country together, but I will not tolerate those who disrupt security, the process of democracy and the unity of our beloved country,” Widodo said on Wednesday. “There is no other option. The military and the police will carry out stern actions in accordance with the law.”

He added that “the situation is under control” as of Wednesday morning.

Indonesia’s Communications and Information Minister Rudiantara announced a ban on the use of social media to publish videos and images on Wednesday “to avoid provocations and false news from spreading to the wider public.” Authorities told reporters that the calls for riots were sometimes accompanied by doctors photos meant to trigger “an emotional response,” according to the Jakarta Post.

“The limitations are applied to features on social media platforms and messaging systems. We know that the modus operandi [of spreading false news] is by posting videos, memes and photos on Facebook, Instagram and Twitter. These posts are screen-capped and go viral on messaging apps, such as WhatsApp. So we will all experience a slowdown if we try to download or upload videos and photos,” Rudiantara told reporters.

Subianto has campaigned in prior elections as a secularist, but this time attempted to ride the growing wave of radical Islamism in the country to the presidency. According to the South China Morning Post, Subianto campaigned on expanding Islamic education and working with Saudi Arabia to give Indonesians a bigger role in the hajj, the annual mandatory pilgrimage Muslims make to Mecca. The newspaper quotes Subianto as asserting in a campaign rally, ”

Islam in Indonesia is a blessing from God, so don’t try to stigmatize a certain group. If you hear takbir [Allahu akbar], that is not a threat aimed at anyone. … Being religious doesn’t mean being extreme or a fanatic.”

While Subianto himself emphasized his faith, supporters went on the attack against Widodo as a secret communist and Christian, using the same attacks that landed political ally Ahok in prison for blasphemy. Ahok had criticized imams who told their congregations that the Quran banned them from voting for him because of his Christian faith.

The pressure forced Widodo to choose Ma’ruf Amin, a senior member of the Muslim Nahdlatul Ulama (NU) group, as his running mate, prompting fears internationally that Widodo would cave to Islamists’ agenda.