The anti-government protests followed a Sunday in which a small group of supporters of the Chinese Communist Party took over the city, jeering pro-democracy youth, cursing the United States and brandishing their middle fingers at protesters: 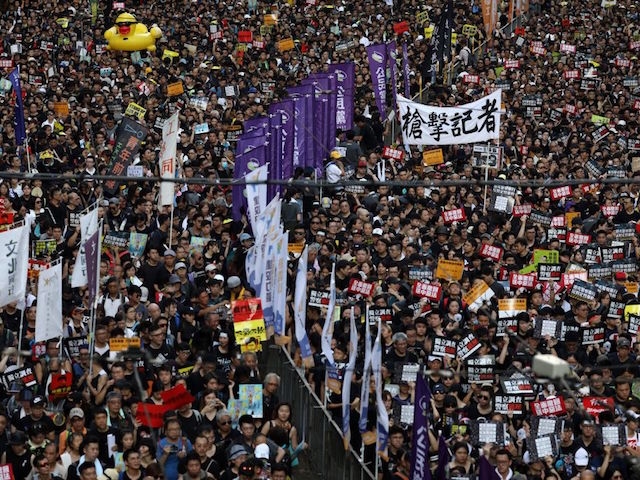 Protesters attend the annual pro-democracy rally in Hong Kong on July 1, 2019 on the 22nd anniversary of the city’s handover from Britain to China (DALE DE LA REY/AFP/Getty Images). 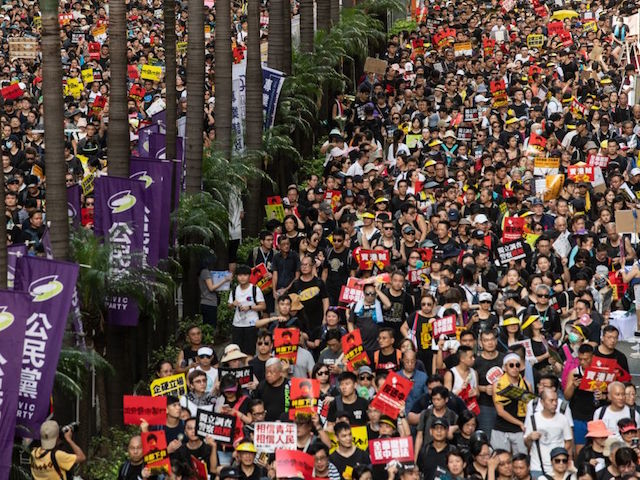 Protesters attend the annual pro-democracy rally in Hong Kong on July 1, 2019 on the 22nd anniversary of the city’s handover from Britain to China (PHILIP FONG/AFP/Getty Images). 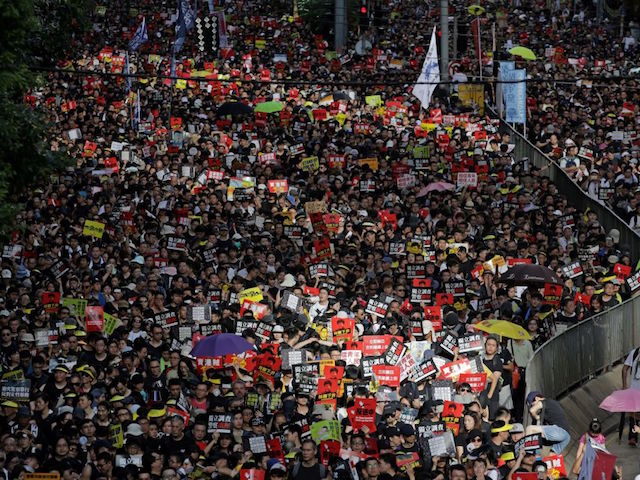 Protesters attend the annual pro-democracy rally in Hong Kong on July 1, 2019 on the 22nd anniversary of the city’s handover from Britain to China (VIVEK PRAKASH/AFP/Getty Images).

The gathering Monday at Hong Kong’s Legislative Council (LegCo) turned violent as the crowd attempted to break into their government’s headquarters, trying to dismantle the building itself and using metal bars to shatter its glass walls. Riot police kept the crowd from breaking in, but they did succeed in keeping China-appointed chief executive Carrie Lam from making an open-air public appearance on a day that the government typically marks with celebrations.

Monday is the 22nd anniversary of the transfer of sovereignty over Hong Kong from the government of the United Kingdom to the Chinese Communist Party. China nominally agreed to allow Hong Kong to maintain its capitalist nature under a policy known as “One Country, Two Systems,” but has slowly eroded the city’s sovereignty. Most recently, China encouraged Hong Kong to pass a law that would allow China to extradite any individual, not only Hong Kong citizens, from Hong Kong to China if they were charged with a Chinese crime. China has no significant free speech protections and considers any worship outside of its government-controlled churches illegal, causing many in Hong Kong to fear that they could be arrested and extradited to China for criticizing the Communist Party in their own, ostensibly free city.

According to the Hong Kong Free Press (HKFP), anti-communist protesters have organized marches against Beijing every year since 2003.

The fear of China taking over Hong Kong and imposing its draconian communist law on the city triggered an enormous wave of protests throughout June. At its height, the protests attracted two million people, or nearly 30 percent of the population of Hong Kong.

In response to the protests, the Chinese-controlled government of Hong Kong tabled the extradition bill. The protesters continue to say this is not enough, however, as the lawmakers could revive the bill at any time should public outrage subside. On Monday, they also demanded that the government apologize and rescind its description of the largely peaceful protests as “riots” and urged the release of protesters arrested for their participation in the marches. Some continue to call for Carrie Lam to step down, though this demand has become less present amid reports that the Chinese government will not allow her to resign for fear of humiliation.

In Admiralty, the legislative district of Hong Kong, protesters attempted to enter LegCo on Monday by breaking through the building’s glass walls. Reporters on the scene witnessed protesters carrying metal bars and a trolley they used to try to smash through the building. Some protesters tried to physically dismantle the building, tearing off some of the paneling on the sides and roof. Many carried umbrellas, the symbol of the 2014 protests against China that ended abruptly after Chinese police began attempting to silence the leaders of the protests.

Police also accused protesters of violence against them, including allegedly using caustic soda, a burning agent, to target cops.

Reports indicate that police shot pepper spray at the crowd and were prepared to use rubber bullets against them.

Hong Kong police warned the crowd that they would immediately arrest anyone entering the LegCo building and that they were authorized to use force against the protesters. A government spokesman later released a statement condemning the protesters for violence: 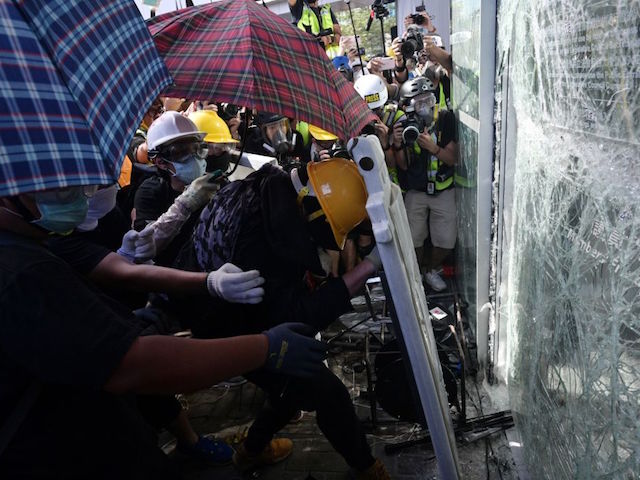 Protesters attempt to enter the government headquarters in Hong Kong on July 1, 2019, on the 22nd anniversary of the city’s handover from Britain to China (ANTHONY WALLACE/AFP/Getty Images). 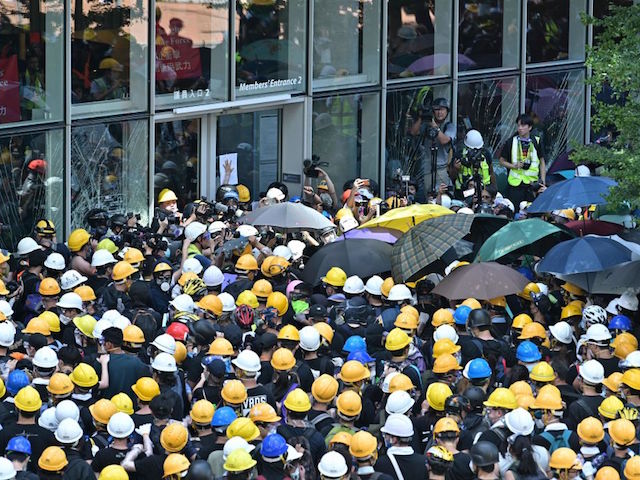 Protesters gather outside the government headquarters in Hong Kong on July 1, 2019 on the 22nd anniversary of the city’s handover from Britain to China (ANTHONY WALLACE/AFP/Getty Images). 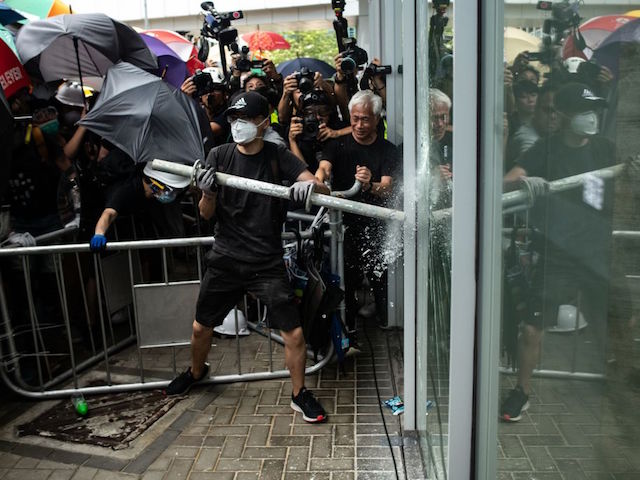 Pro-democracy lawmaker Leung Yiu-chung (C with white hair) tries to stop a protester from breaking a window at the government headquarters in Hong Kong on July 1, 2019 on the 22nd anniversary of the city’s handover from Britain to China (PHILIP FONG/AFP/Getty Images).

“Hong Kong is a society that respects the rule of law, and has never tolerated violence. Protesters who resort to violence must stop their acts immediately. The police will take appropriate enforcement action to protect public order and safety,” the spokesman said, according to the South China Morning Post. The government “strongly condemns and deeply regrets the extremely violent acts committed by some protesters who stormed the Legislative Council Complex this afternoon, using a roll cage trolley as a ram and iron poles to shatter glass doors of the Legco.”

The aggressive nature of Monday’s protest appeared to be a turning point in the nature of the anti-China events of the past month. The mass displays of opposition in June were largely peaceful, and while protesters have in the past attempted to reach LegCo, they have not attempted to physically destroy it.

“They have tried many kinds of protests … but there were no results. They really want to achieve something, but there are no methods,” social worker Jackie Chen told the HKFP, noting that the protesters tend to be young students who are frustrated by the growing Chinese communist presence in their lives.

In contrast, the crowd gathered Sunday was older and smaller, though more vitriolic in their displays of opposition to the protesters. The HKFP reported that many of the older China supporters hurled profanities at the small crowd of pro-democracy protesters that had organized to greet them, waving Chinese flags and calling the protesters “Chinese traitors.”

“Police had to repeatedly intervene to help largely young anti-government protesters escape after they were surrounded by larger crowds of pro-establishment supporters, many jabbing fingers in their opponents’ chests, scuffling with them and hurling insults,” the HKFP reported.

Joshua Wong, a leader who rose out of the 2014 protest movement and was recently released from prison after being arrested for his role in pro-democracy advocacy, published video of the attacks from the pro-China crowd on Twitter and a photo of an older man raising his middle finger at him:

This is what to expect from the other side! https://t.co/5wnfkqV2QI

After cheering for police and listening to speeches about peace and order, police supporters leaving the rally are riled up by the sight of @joshuawongcf inside LegCo. “How much money did you pocket? Fuck your mom! Chinese traitor!” pic.twitter.com/d0S5DB6tZU

The handover anniversary event on Monday was a somber one. Lam delivered remarks once again, apologizing for her role in creating the protests and promising to “learn the lesson.” Lam gave her speech indoors to avoid inviting more protests against her. Helena Wong Pik-wan, an anti-China lawmaker, interrupted her from within the safe indoor space, demanding Lam step down.

“The government will need to reform its governing style urgently, which will start from me,” Lam said.

The Chinese government’s state-run media outlets covered Lam’s speech on Monday, but at press time have not mentioned the protests: 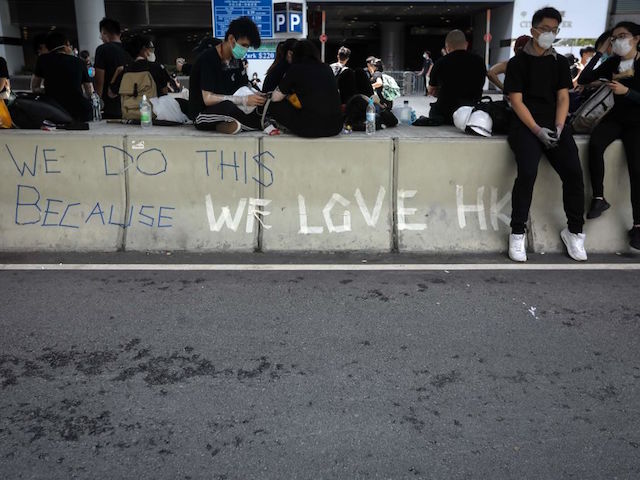 Protesters rest on a road divide outside the Legislative Council in Hong Kong after a flag raising ceremony to mark the 22nd anniversary of the city’s handover from Britain to China on July 1, 2019 (VIVEK PRAKASH/AFP/Getty Images).