A Hong Kong police officer fired at least one gunshot on Sunday night, officials confirmed, amid a chaotic scene in the city’s Tsuen Wan district in which pro-democracy protesters began attacking mahjong parlors they accused of ties to organized crime.

Protesters believe, and Hong Kong police have in part confirmed, Hong Kong gangs known commonly as triads organized at least two violent attacks on protesters since the pro-democracy movement escalated into regular assemblies for freedom 12 weeks ago. The mahjong parlor attacks are believed to be a response to the triad-linked mobs wearing white and carrying metal rods that beat protesters in multiple neighborhoods in Hong Kong, Tsuen Wan among them.

In addition to the first recorded use of firearms by police against protesters in the current wave of Hong Kong protests, police used water cannons to attack and disperse a pro-democracy assembly on Sunday, an escalation many fear will lead to a violent crackdown on all acts of public dissent.

Millions have joined the Hong Kong protest movement against increasing Chinese interference in the autonomous territory. The protesters have issued five demands to authorities meant to safeguard the individual freedoms Hong Kong residents enjoyed for decades under British rule. China’s communist regime has accused the American government of funding and organizing the protest movement, providing no evidence for its claims.

Video footage and photos circulating from Tsuen Wan showed a large group of protesters using bamboo sticks as weapons and charging at police, while police used tear gas and water cannons to fight back the protesters. At least two officers were photographed brandishing their firearms; the Hong Kong Free Press (HKFP) reported that three officers drew their guns, but only one fired.

Journalists on the scene also objected to the use of firearms, claiming police targeted them in addition to protesters. Chinese state media responded to the complaints by claiming that journalists were actively attempting to “tarnish the image of Hong Kong police” and misreporting incidents of police brutality by filming them and then publishing the images. The government newspaper Global Times claimed that police “have become the prey of some unscrupulous media.”

Police confirmed in a press conference Monday that an officer fired one “warning” shot because, authorities claimed, the protesters were threatening his life. Officials referred to the protesters attacking mahjong parlors in the neighborhood as “rioters.”

News reports have not confirmed the identity of the shooter. Authorities told reporters that the shooting did not injure any protester. 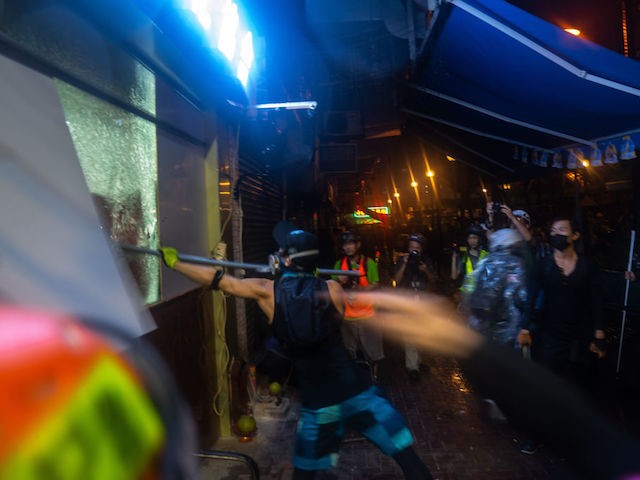 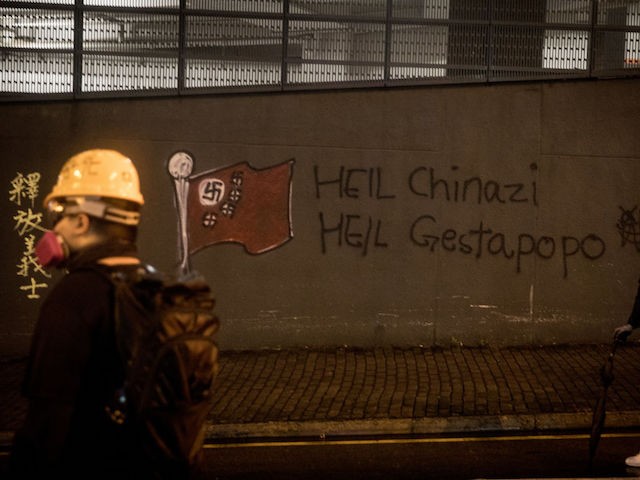 Protesters walk past anti-China graffiti during clashes with police after an anti-government rally in Tsuen Wan district on August 25, 2019, in Hong Kong. (Chris McGrath/Getty Images)

At the time of the shooting, “our officers’ life was certainly in great danger,” Yu reportedly said. “If he did not respond to those rioters in that way, he might have been beaten to death.”

Police reportedly arrested 86 people for participating in protests this weekend and used 215 rounds of tear gas and 74 rubber bullets, according to Reuters. The youngest person arrested is 12 years old.

Regime media claim some police officers were injured in the protests.

Video from the incident late Sunday shows police attacking protesters and groups of masked protesters attempting to defend themselves with sticks. Police appeared to injure some with tear gas canisters and rubber bullets.

A warning shot was fired into the air, according to RTHK, as two men on their knees pleaded with officers not to fire.

It's being described as one of the most violent nights of clashes in 3 months – Hong Kong police firing a live bullet for the first time. @renaehenry9 #9News pic.twitter.com/6zZNYU4r50 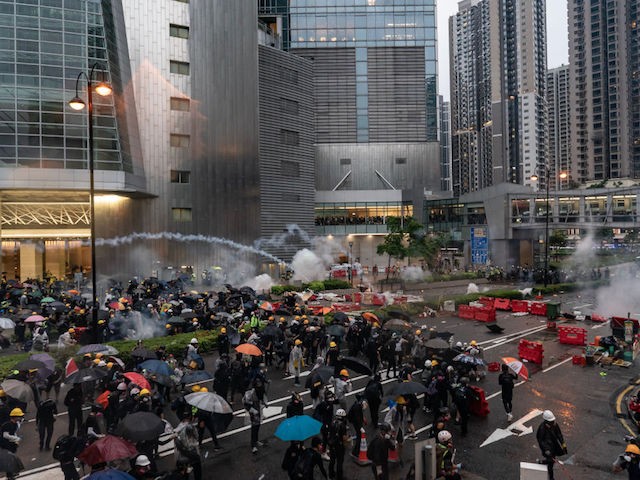 Protesters clash with police during an anti-government rally in Tsuen Wan district on August 25, 2019 in Hong Kong. (Anthony Kwan/Getty Images) 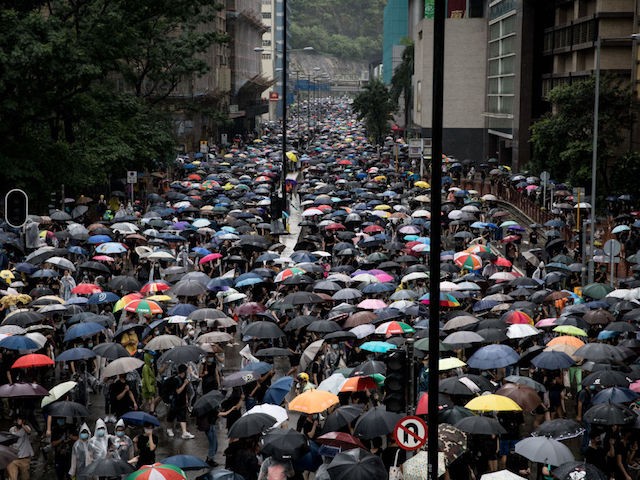 Thousands of protesters march during an anti-government rally in Tsuen Wan district on August 25, 2019 in Hong Kong. (Chris McGrath/Getty Images)

Millions in Hong Kong began marching in June against a proposed law that would have allowed China to extradite anyone present in Hong Kong, not just Chinese citizens, to Chinese prisons within the communist territories if accused of breaking Communist Party laws. Beijing strictly limits individual freedoms, particularly those of speech and religion, leading many to fear that the law would allow Chinese police to disappear Hong Kong residents into its notorious prison system for criticizing the regime, even if done outside of China. The biggest protest in recent memory occurred last weekend, attracting 1.7 million marchers eleven weeks into the protest movement.

Individual protesters have called for independence from China, but the greater movement – which has resisted appointing public leaders – insists on much more modest goals. The protesters are making five demands of their government: the full withdrawal of the extradition bill from the city’s legislature, an independent probe into police brutality, freedom for imprisoned protesters, the retraction of the government’s description of the June 12 protest as a “riot,” and universal election of all Hong Kong lawmakers.