Thousands of people in Hong Kong took the streets on Saturday and Sunday, the 16th weekend of rolling protests against the Chinese communist regime and the last before the Communist Party celebrates its 70th anniversary on Tuesday.

Peaceful marches throughout the day – with a “global” theme featuring protesters waving the flags of dozens of nations that have expressed support for their movement – gave way to violence in the evening as police shot tear gas, water cannons, rubber bullets, and, in one case, live gunfire at the protesters. In response, a small group of protesters responded by hurling Molotov cocktails and bricks at police. Flaming barricades appeared throughout the city to keep police at bay.

The Hong Kong Foreign Press (HKFP), citing police and hospital officials, reported on Monday that the violence has resulted in 48 people being hospitalized, one of them a woman described as being in “serious condition.” Police arrested over 100 people.

While no official estimates of the number of people attending these marches is currently available – and likely will never be for Sunday’s given that police did not grant a permit for it – estimates suggest that the number of people taking the streets on Saturday rose to the hundreds of thousands, while several thousands braved the streets on Sunday to call for an end to Chinese repression of Hong Kong.

The weekend began with a peaceful march on Saturday to observe the fifth anniversary of the 2014 Umbrella Movement, a pro-democracy wave of protests against China ultimately subdued by arrests and the use of surveillance technology to silence dissidents. Protesters managed to obtain a permit for Saturday’s march, but not Sunday’s. Despite this, thousands also took the streets on Sunday, urging the world this time to ensure that the 70th year of communist rule in China would be the last.

The Hong Kong protest movement that emerged in June has issued five demands of its government. Chief Executive Carrie Lam has granted one of them: the withdrawal of a proposed law that would have allowed China to extradite any individual present in the city if accused of violating communist law.

The protesters have not dropped their other four demands: freedom for political prisoners, an independent investigation into police brutality, an end to calling the peaceful protests “riots,” and direct election of all lawmakers. Currently, Hong Kong residents are only allowed to elect half of their Legislative Council, the other half appointed by a shady coalition of special interests controlled by China.

Hong Kong is part of China under a policy called “One Country, Two Systems,” which denies Hong Kong sovereignty in exchange for Beijing not imposing communism or restricting its traditional democracy. The protesters contend that China has violated the principle of “One Country, Two Systems,” and has revealed a desire to fully annex Hong Kong through policies like the extradition bill.

The “illegal” protest Sunday also directly targeted the Chinese Communist Party given the upcoming anniversary. Protesters waved Chinese flags with X marked on them, trampled images of Chinese dictator Xi Jinping, and used swastikas and other Nazi imagery to convey the gravity of the threat China poses to the world. 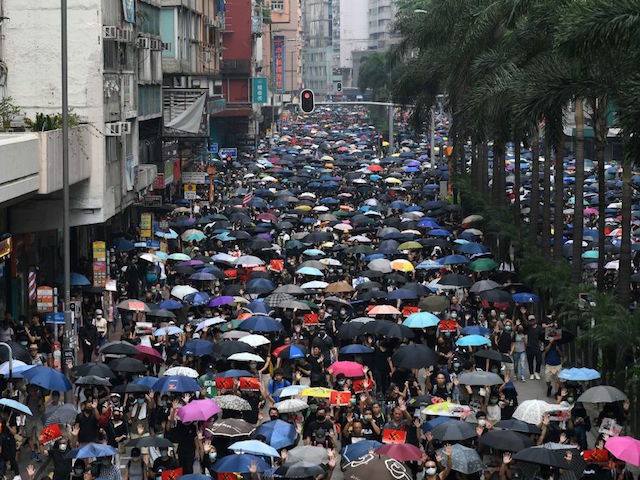 Thousands of people hold an unsanctioned march through the streets of Hong Kong on September 29, 2019, part a coordinated day of global protests aimed at casting a shadow over communist China’s upcoming 70th birthday. (MOHD RASFAN/AFP/Getty Images) 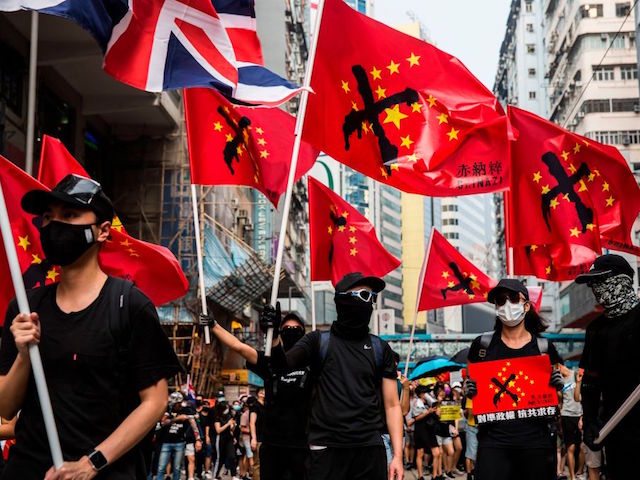 Thousands of people hold an unsanctioned protest march through the streets of Hong Kong on September 29, 2019. (ISAAC LAWRENCE/AFP/Getty Images) 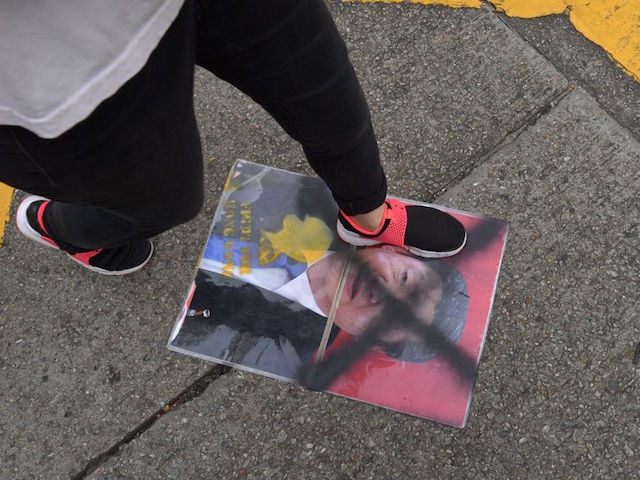 A protester steps on an image of China’s “President” Xi Jinping during an unsanctioned march through the streets of Hong Kong on September 29, 2019, part a coordinated day of global protests aimed at casting a shadow over communist China’s upcoming 70th birthday. (NICOLAS ASFOURI/AFP/Getty Images)

"Appeasement is a great policy if you want a world war." pic.twitter.com/CNh1RSeNIi

In addition to raising the four remaining demands, protesters called for the world to intervene in Xinjiang, western China, where the communists have built thousands of concentration camps holding 1 to 3 million people, mostly Muslims of the Uighur ethnic minority. Beijing claims the camps are “vocational centers” where Uighurs learn job skills; survivors say they face indoctrination, torture, murder, slavery and live organ harvesting.

“They are treating the Uighurs very inhumanely. They are put in concentration camps,” an unnamed Hong Kong protester told the Los Angeles Times. “These actions should not be tolerated in the world right now. But they are letting it happen.”

Graffiti throughout Hong Kong urged support for the Uighurs in addition to the Hong Kong democracy movement. 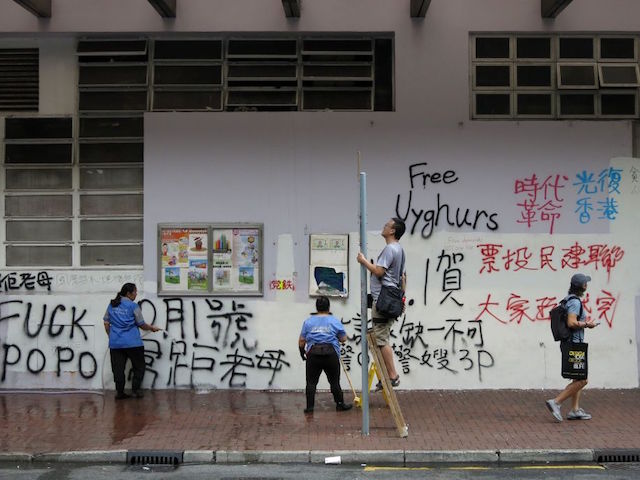 Cleaners try to remove graffiti put up by protesters in Hong Kong on September 30, 2019, a day after the protest-wracked financial hub witnessed its fiercest political violence in weeks. (RICHARD A. BROOKS/AFP/Getty Images)

Police cracked down heavily on Sunday’s protest, first with liberal use of tear gas against peaceful protests, then eventually with gunfire. Police officials confirmed that one officer fired “one warning shot” on Sunday because protesters had placed the lives of police “under serious threat.” 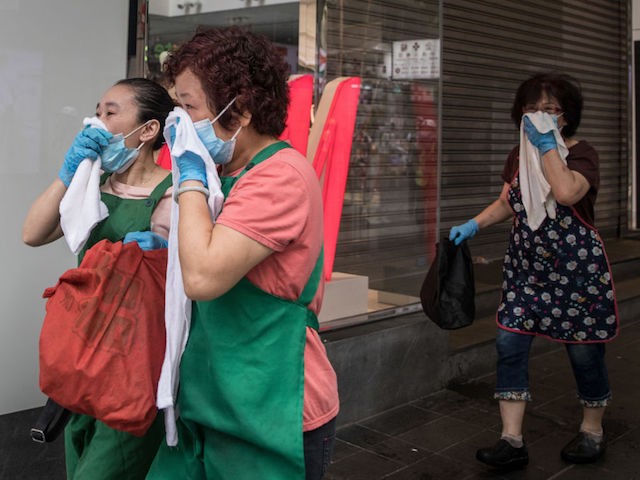 Women run covering their mouths after police fired tear gas to disperse pro-democracy protesters ahead of a march on September 29, 2019, in Hong Kong. (Chris McGrath/Getty Images) 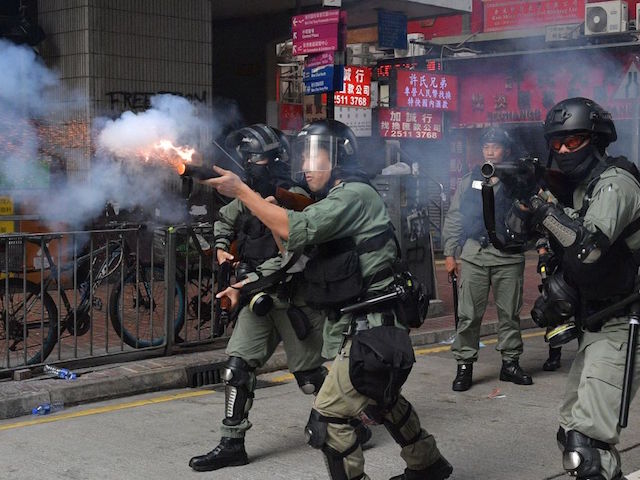 Police assaulted at least one Hong Kong lawmaker, pro-democracy legislator Eddie Chu, when Chu attempted to approach police and discuss their strongarm tactics. One officer reportedly attempted to hand Chu water and faced threats to stand down from his peers. In a press conference Monday, Chu said the officers who attacked him were illegally operating without displaying proper identification, making it impossible to identify and punish the officer for his use of violence.

The officer’s face is visible on video shared online through the Hong Kong newspaper Apple Daily.

.@ChuHoiDick said the officer in question didn't have his warrant card or police ID number displayed on his uniform, which means he was unable to identify him.https://t.co/GE6FBH4hLE #hongkong #hongkongprotests #AntiELAB

Journalists and activists alike captured images of extreme police abuse in response to the peaceful march. Protesters wearing gas masks and goggles – a necessity after police shot a woman in the eye in August – were seen bleeding on the streets in police custody. In one shocking image to emerge from the protests, police appear to be using a protester strapped to a cot as a gun mount. 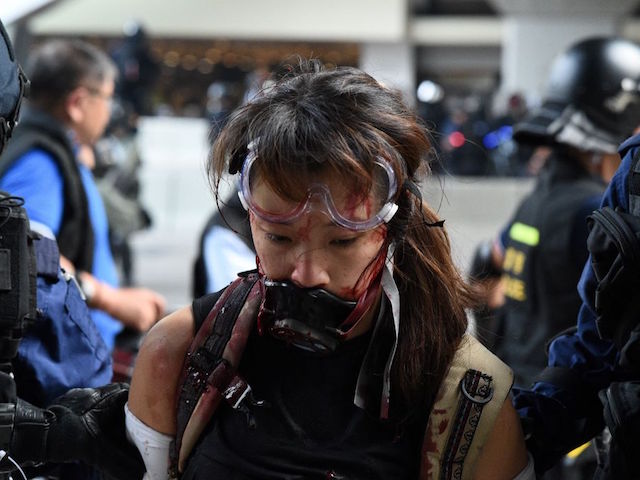 The arrested in Admitalty was spurting blood and another got kicked after we filmed him yelling out his name. Video by Vivian Tam #antiELAB #ExtraditionLaw #HongKongProtests pic.twitter.com/qaGAArnFnY

As the sun set, protesters built flaming barricades to keep police from attacking them, setting significant portions of the city on fire. 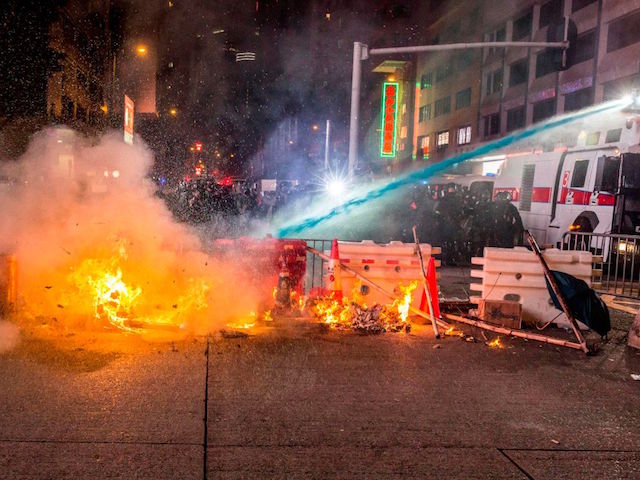 A water cannon (R) is used to put out a fire (C) during clashes with police following an unsanctioned march through Hong Kong on September 29, 2019. (SAAC LAWRENCE/AFP/Getty Images) 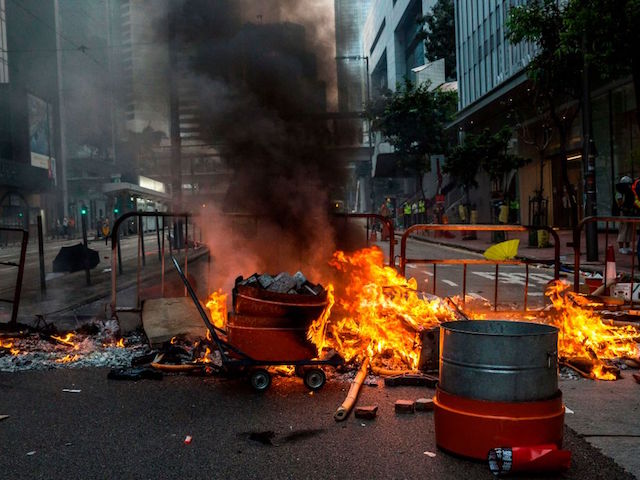 Debris are left burning during clashes with police following an unsanctioned march through Hong Kong on September 29, 2019. (ISAAC LAWRENCE/AFP/Getty Images) 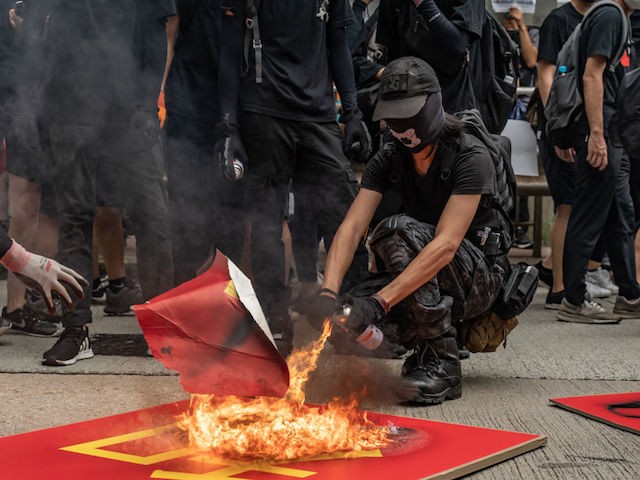 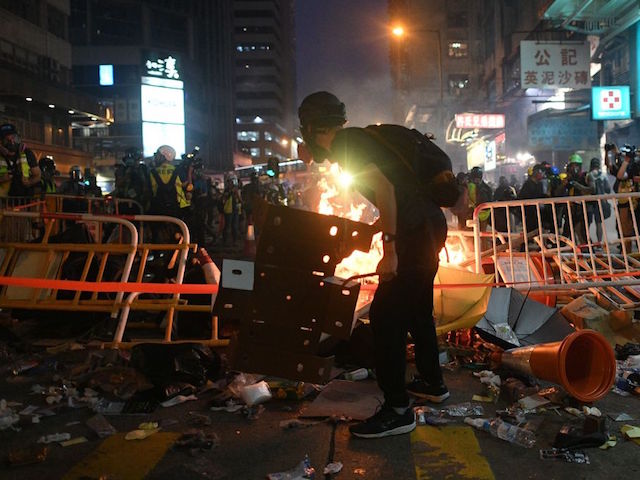 A protester throws more debris onto a fire set in the street during clashes with police following an earlier unsanctioned protest march through Hong Kong on September 29, 2019. (MOHD RASFAN/AFP/Getty Images)

“A number of radical protesters had gone on a rampage since the afternoon, vandalising numerous public property and the facilities of several MTR [railway] stations,” a police spokesman said, according to the HKFP. “They set fires at various places, which were fierce at one point, and hurled petrol bombs on the streets as well as into a MTR station and at the Mong Kok police station, posing a grave threat to police officers, MTR staff and members of the public at the scene.”

“Some local observers have already pointed out that young radicals, who risk their lives to do illegal acts such as attacking police officers, damaging public property, and vandalizing government buildings, know there are low costs of breaking the law,” the Times claimed on Monday. “The areas hit by the chaos on Sunday used to be popular areas for shopping and tourism. However, almost all the stores along the roads from Wan Chai to Causeway Bay were shut down on Sunday, and radicals also vandalized the MTR station in Wan Chai.”

Protesters are organizing events against the communist regime for Tuesday, the official anniversary of the People’s Republic of China.