Parents of students trapped at Hong Kong Polytechnic University (PolyU) after a violent weekend that set a significant percentage of the campus ablaze were reportedly “begging” police to let them see their children on Monday.

Hong Kong’s police forces raided the PolyU campus on Sunday, days after forcing the Chinese University of Hong Kong (CUHK) to shut down for the semester with a violent door-to-door operation seeking the arrests of pro-democracy protesters. Having the foresight of events at CUHK, students at PolyU appeared to prepare for an invasion with Molotov cocktails, coordinated use of umbrellas to defend from tear gas, and, in at least one attack, the use of a bow and arrow.

Images from the clashes on Sunday showed larges areas of the campus set aflame, covered in tear gas canisters, or otherwise destroyed. Police appeared to violently arrest students they believed were participating in attacks against officers, thrashing them on the group and leaving them bruised and bloodied.

Police returned to the campus early on Monday, blockading all roads around it to prevent the students from leaving. Students and parents protested that, without allowing bystanders on the campus to flee the violence, authorities would fail to restore order. 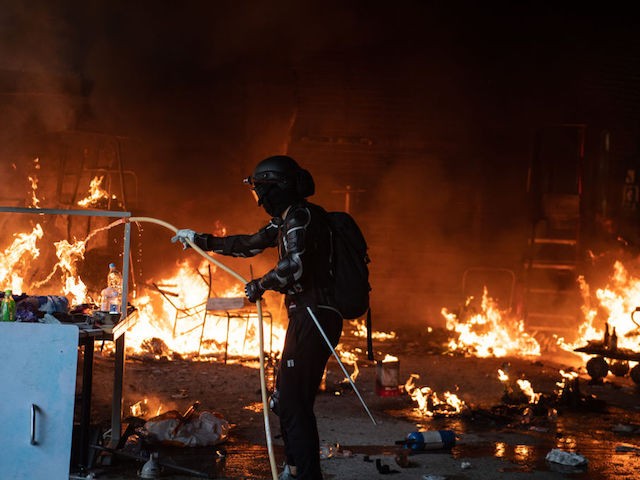 An anti-government protester puts out a fire at Hong Kong Polytechnic University on November 18, 2019, in Hong Kong. (Photo by Laurel Chor/Getty Images) 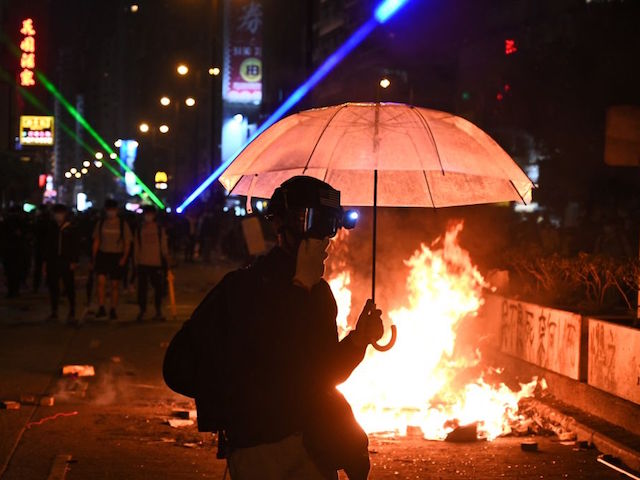 Protesters set a fire as they march to Hong Kong Polytechnic University in Hong Kong on November 18, 2019. (PHILIP FONG/AFP via Getty Images) 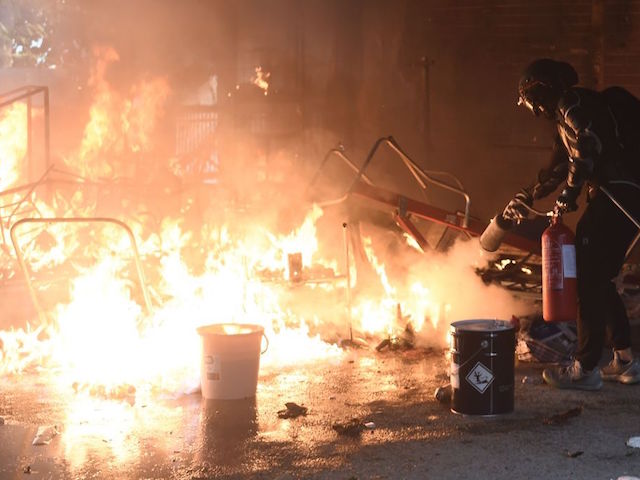 A student tries to extinguish a fire at the entrance of Hong Kong Polytechnic University in Hung Hom district of Hong Kong on November 18, 2019. (YE AUNG THU/AFP via Getty Images) 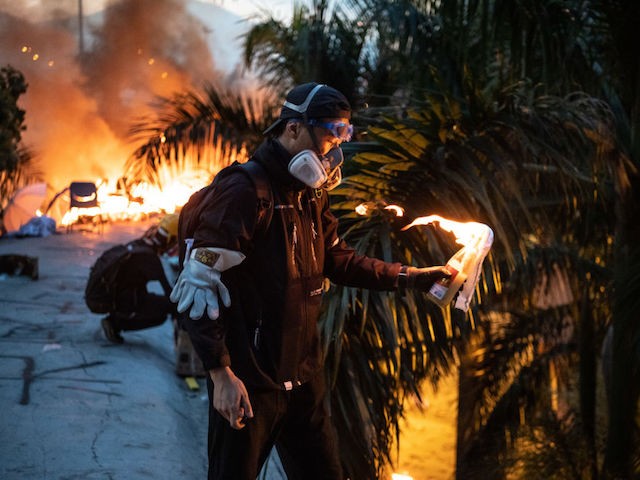 A protester lights a petrol bomb in front of a fire on a pedestrian bridge during clashes with police at Hong Kong Polytechnic University on November 18, 2019, in Hong Kong. (Laurel Chor/Getty Images)

The Hong Kong Free Press (HKFP) reported that police called the move a “dispersal and arrest” operation, leaving unclear how preventing anyone from leaving the campus would facilitate “dispersal.” Police had also made pleas to the protesters this weekend to leave campus, making their attacks on those attempting to do so confounding to the protesters.

Hong Kong’s police have failed to suppress a protest movement that erupted in June in response to a proposed law that would have allowed China to extradite any individual present in Hong Kong if accused of violating communist laws. Under the “One Country, Two Systems” policy, China cannot impose communist law in the city.

Lam has since withdrawn the extradition bill but protesters continue to demand five other concessions from the government: freedom for protesters arrested during assemblies, an end to referring to peaceful assemblies as “riots,” an independent investigation into police brutality, and the direct election of lawmakers to better prevent a repeat of the extradition bill.

“I feel worried. As a parent, I feel helpless,” the mother of a student trapped at PolyU told the broadcaster RTHK on Monday at a sit-in organized by similarly concerned parents. RTHK reported the parents were “bursting into tears and begging police officers to allow the young people inside the university to come out,” noting that, given the chaos, it was impossible to guarantee that all the students trapped inside were involved in violence.
One parent said she was protesting for the freedom of her 16-year-old son, highlighting the fact that many of those trapped are underage.

A tearful mother is seen crying in Tsim Sha Tsui as she fears she may lose her children, who are now in PolyU. But one police officer questioned: “isn’t throwing bricks also hurting people?”

In addition to the parents, a group of secondary school principals organized a press conference in front of the Hong Kong Legislative Council (LegCo) to demand police open the PolyU campus to allow students to leave.

“We want you to be safe, we want to bring you out. It’s time for you to go home safely,” Lee Suet-ying, the former chair of the Hong Kong association of the Heads of Secondary Schools, said, addressing the students.
As many as 500 students are believed to be trapped on the PolyU campus, many with significant injuries from tear gas, rubber bullets, and water cannon fire. Police reportedly stationed in a cordon surrounding the campus at 5:30 a.m. Monday morning and have been shooting tear gas at students who attempt to escape since. Many of those seen attempting to flee were not wearing black, the color of the protest movement, or in any way indicating that they were protesters – they simply attempted to run off of campus.

Police also reportedly antagonized individuals on roads leading into campus, threatening them to stay out.

From telegram, #HongKongPolice arresting citizens “at will now” for simply driving cars near #PolyU pic.twitter.com/3tGI4APpkV

A group of about 100 students attempted to flee the campus early Monday, receiving a barrage of tear gas and rubber bullets. Some hit by water cannons reportedly exhibited signs of hypothermia. They reportedly decided to run because, early Monday morning, the president of PolyU claimed that police had agreed to a “ceasefire” to allow innocent students to flee.

Images and videos from Monday morning show police stomping on students, crushing their faces on the ground, and otherwise brutalizing them. 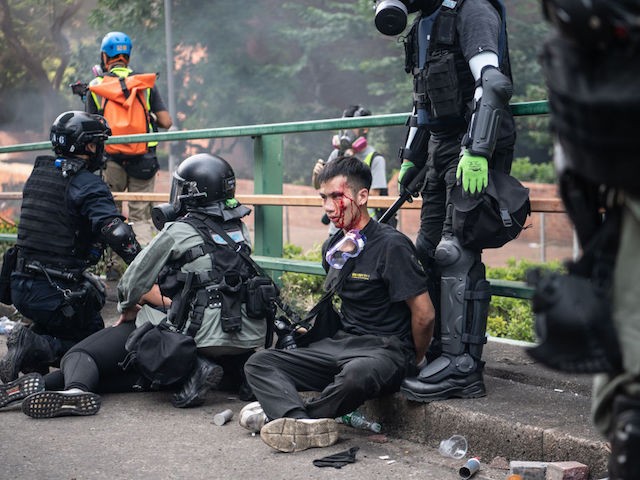 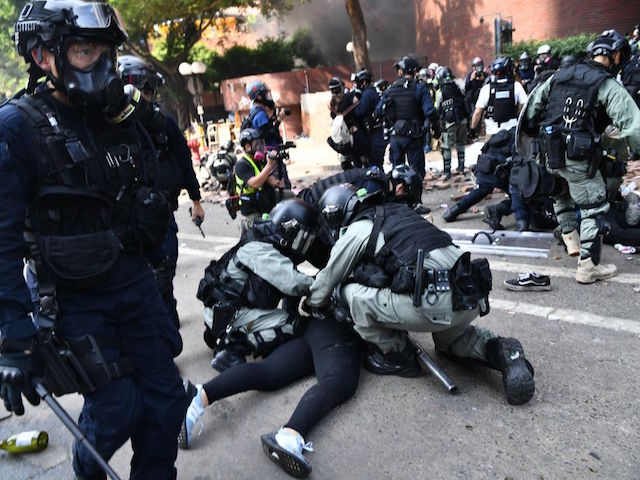 Protesters are detained by police near the Hong Kong Polytechnic University in Hung Hom district of Hong Kong on November 18, 2019. (ANTHONY WALLACE/AFP via Getty Images) 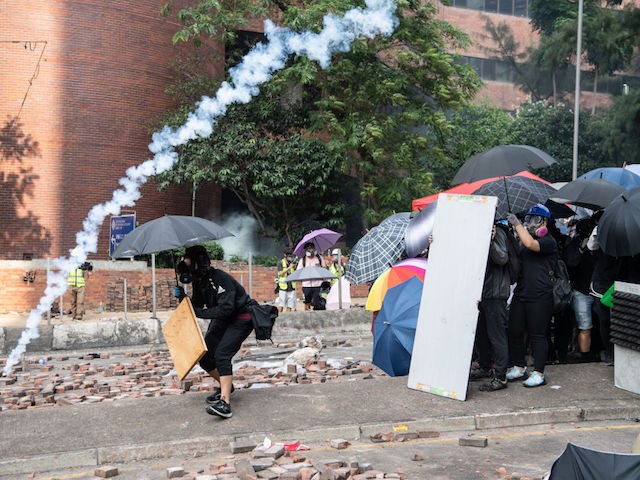 #HKPoliceTerrorists dragged an arrestee and then stepped on an the arrestee's head! Such behaviours mustn't be tolerated and these terrorists must be punished! pic.twitter.com/lRL1ZDqkPG

Police confirmed the arrest of 61 medics on campus on Sunday, leaving almost no one on campus with the ability to offer professional first aid to the students they injured.

According to PolyU student union president Ken Woo, the students fear they are running out of food and have no access to medical care despite being attacked and significantly injured. Also reportedly trapped on campus are reporters stationed there to cover the clashes. RTHK claimed that police blocked their reporters sent it to take over from the Sunday shift and those working on Sunday were still trapped inside.

Police reportedly stormed the Hung Hom PolyU campus on Sunday, looking for individuals participating in the protest movement to arrest. Protesters had stationed themselves there for a week, emboldened to defend the campus by the attack on CUHK, which resulted in not only injured students but injured school administrators. The overwhelming majority of those in the PolyU protests are believed to be students.

The protesters responded to the invasion of the campus on Sunday with fire. Many used Molotov cocktails to firebomb police and attempt to keep them out of campus. At least one student was armed with a bow and arrow, as an officer was hospitalized with an arrow lodged in his knee.

In one shocking incident caught on video, students hurled Molotov cocktails into a police truck, sending it bursting into flames. Protest leaders on social media said some of those trucks appeared to be attempting to run over the students, Tiananmen-style, resulting in the desperate defense tactic.

Poly U entrance in flames as riot police try to storm in #HK #HongKongProtests #StandwithHongKong pic.twitter.com/egcKyS4X5j

Some of the dramatic footage from Poly University in Hong Kong last night.

This police truck was trying to go into campus but was instead lit on fire by Molotov cocktails pic.twitter.com/b9Yz2d5jju

Chinese state media blamed the protesters completely for the police brutality on Sunday and Monday.

“Observers believed that rioters have gone completely hysterical and acted like terrorists as they attack police with lethal weapons, target innocent residents and turn campuses into battlefields,” the Global Times, a communist government newspaper, claimed on Monday, accusing protesters of making chemical weapons with laboratory materials stolen from science classes to use on police. The newspaper did not provide evidence for this accusation.

The Times disputed reports that students suffered symptoms of hypothermia after being attacked with water cannons, claiming the cannons proved “futile” against umbrellas.
Lam, the chief executive, applauded police in a Facebook post on Monday, calling the office recovering from an arrow wound “very courageous” and stating that, during a visit with him, the officer said he would return to work as soon as possible.