The campus of Chinese University of Hong Kong (CUHK) became the focal point of the protest movement on Tuesday, degenerating into a veritable war zone as police battled protesters, flooded the grounds with tear gas, fired rubber bullets, and rolled in a water cannon truck that splattered demonstrators with blue dye.

Police officials said they raided CUHK in pursuit of students who were allegedly throwing objects from a bridge onto vehicles passing below. Other students rallied on campus and set up barricades to prevent the police from entering.

Some students voiced suspicions that the police really wanted to invade CUHK so they could gain access to the servers for Hong Kong’s Internet exchange, which is located on campus. Students and their supporters warned that if the police occupy the campus, Hong Kong would “face physical Internet disconnection to the outside world” along with a “local internet lockdown.” They pointed to China’s infamous “Great Firewall” as an example of how Internet freedom in Hong Kong could be crushed.

The Hong Kong Free Press reported one of the tear gas victims was CUHK Vice Chancellor Rocky Tuan, who unsuccessfully attempted to broker a peaceful resolution to the standoff between riot police and students:

Riot police earlier stormed the campus and arrested multiple people as protesters created barricades and threw objects as well as petrol bombs. Tuan arrived to negotiate with police representatives and, at around 5pm, the fighting was paused.

Tuan then told students that police were willing to retreat as long as the university arranged security guards and volunteers to help prevent any more cases of objects being thrown from a height.

However, students demanded the release of those arrested in the afternoon, and for police to leave campus premises altogether. Tuan replied that he would visit the arrested students at the police station.

Tuan walked to the Number 2 bridge near the campus to ask the police to withdraw, but the police told him to back off because some of the students behind him were armed and out of his control. When Tuan and other university staff did not withdraw as ordered, the police hit them with tear gas.

As for the disposition of the crowd gathered behind Tuan when he tried to talk with the police, the Hong Kong Free Press noted one of them was ostentatiously carrying a chainsaw, and there are reports of students at CUHK arming themselves with bows and javelins, but faculty members insisted none of them was acting aggressively toward the police or throwing objects at them when tear gas was deployed. Some of them reportedly responded by throwing Molotov cocktails after they were hit with tear gas.

Riot police did eventually withdraw from the bridge, which was taken as a symbolic victory by student protesters. The president of the CUHK student union sought to consolidate that victory on Wednesday by filing for an injunction against police from entering the campus again without a warrant. The injunction would also prohibit the use of pepper spray, tear gas, or rubber bullets on campus unless the school administration grants permission for such riot control measures.

CUHK students dug in for a protracted standoff against the police on Wednesday and encouraged resistance to “blossom everywhere.” Supply chains were organized to bring food and water to students holding the campus and the Number 2 bridge. A similar standoff appeared to be taking shape on the grounds of at least one other school, Polytechnic University.

Dozens of students who were not involved in the protests fled the campus, saying they feared an even more aggressive confrontation in the near future. Some of them left Hong Kong entirely, decamping to the nearby Chinese city of Shenzhen.

Academic organizations in Hong Kong and abroad condemned the police raid on CUHK and police actions at other universities. A statement from a group of international scholars and university administrators on Tuesday urged Hong Kong police to show more restraint and respect for academic freedom in the future, while also urging student protesters to “exercise restraint in expressing their opinions and exercising their freedom of expression.”

“We have regarded universities in Hong Kong as global partners in academic and students exchanges. What we witness now is incompatible with our expectations. We may have to reconsider our partnerships with Hong Kong universities in the future if students’ safety is at risk and such blatant violation of academic and intellectual freedom continues,” the statement concluded. 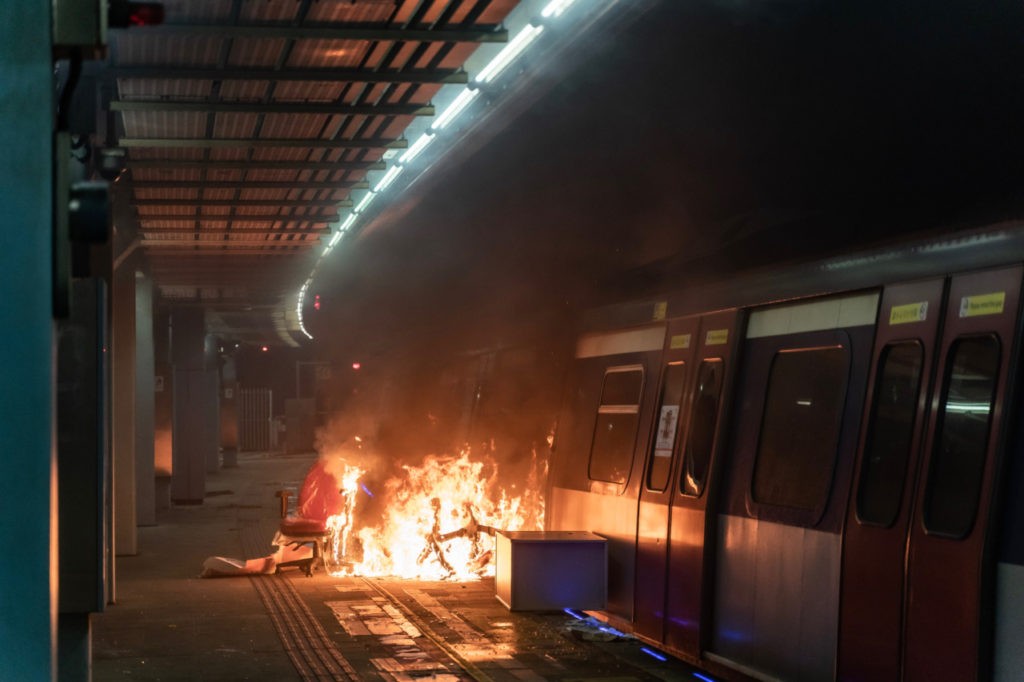 HONG KONG, CHINA  — A fire is seen at a MTR station during a demonstration at Chinese University of Hong Kong on November 13, 2019 in Hong Kong, China. Anti-government protesters organized a general strike since Monday as demonstrations in Hong Kong stretched into its sixth month with demands for an independent inquiry into police brutality, the retraction of the word “riot” to describe the rallies, and genuine universal suffrage. (Anthony Kwan/Getty Images)

A Hong Kong organization called the Scholars’ Alliance for Academic Freedom condemned the police for using excessive force on campus.

“I don’t think our students were trying to do harm to the general public. They were just gathering on campus, or inside campus. So it’s quite unlawful for the police to go in to crack down on any student gathering,” said alliance member Chan King-ming, an associate professor at CUHK and also a member of Hong Kong’s opposition Democratic Party.

Chan added it was “totally disgraceful” for the police to blame the CUHK confrontation on students and accuse them of attacking police officers.

Communist Chinese state media naturally had a very different perspective on Tuesday’s events. The mainland Global Times saluted the police for trying to protect the Hong Kong public from “rioters” and said they had “no choice” but raid the campus. The Global Times also celebrated “Escape Day,” the exodus of mainland Chinese students from Hong Kong schools because they fear more violent confrontations.

Observers of a more skeptical bent argued the pro-Beijing government of Hong Kong went too far with the assault on CUHK, citing the long lines of supporters bringing supplies to the campus as evidence that public opinion is turning decisively in favor of the protesters. A growing number of viral videos showing inexcusably harsh police treatment of civilians, including women and young girls, suggest the public is closely watching the police and does not approve of their tactics.

One way or the other, there is a sense in Hong Kong that the situation has reached a tipping point. A line of graffiti spotted on Wednesday asked, “Is now 1989 4th June?” – a reference to Communist China’s murderous crackdown on pro-democracy activists in Tiananmen Square.