The founder of China’s oldest environmental organization and his wife died of “severe lung disease” amid the spread of a novel virus that causes pneumonia, but tested neither of them for the virus and failed to isolate any potential contacts, Radio Free Asia (RFA) reported on Wednesday.

The “Wuhan virus,” a coronavirus mutation that originated in the city of Wuhan and Chinese authorities only identified on Monday, has infected nearly 600 people and killed 17, according to World Health Organization (WHO) estimates on Thursday. Scientists believe it originated in a wild game and seafood market and have matched the genome to viruses active in snakes common to the region in central China. The virus causes respiratory illness and triggers pneumonia.

The Communist Party announced it would cancel all flights out of Wuhan and curtail public transportation in Wuhan and four neighboring cities late Wednesday to prevent people from spreading the virus. The limitations come shortly before the Lunar New Year, during eastern Asia’s busiest travel season. The measures did not prevent the virus from spreading internationally, however; Japan, Taiwan, Hong Kong, Thailand, South Korea, and the United States have all documented cases, most of them individuals from Wuhan.

Beijing has conceded that the number of patients who did not have contact with the original source of the virus is growing, meaning person-to-person contact is possible and increasingly common.

No health authorities have identified Xu Dapeng, the founder of the oldest environmentalist NGO in China Friends of Nature, as a Wuhan virus carrier. According to RFA, the Chinese government confirmed his death on Wednesday, but attributed it to “pneumonia.” His wife, who RFA does not name, died of a similar illness ten days before Xu, which would place the date of her infection before China announced it had identified the virus.

Both died in Wuhan. 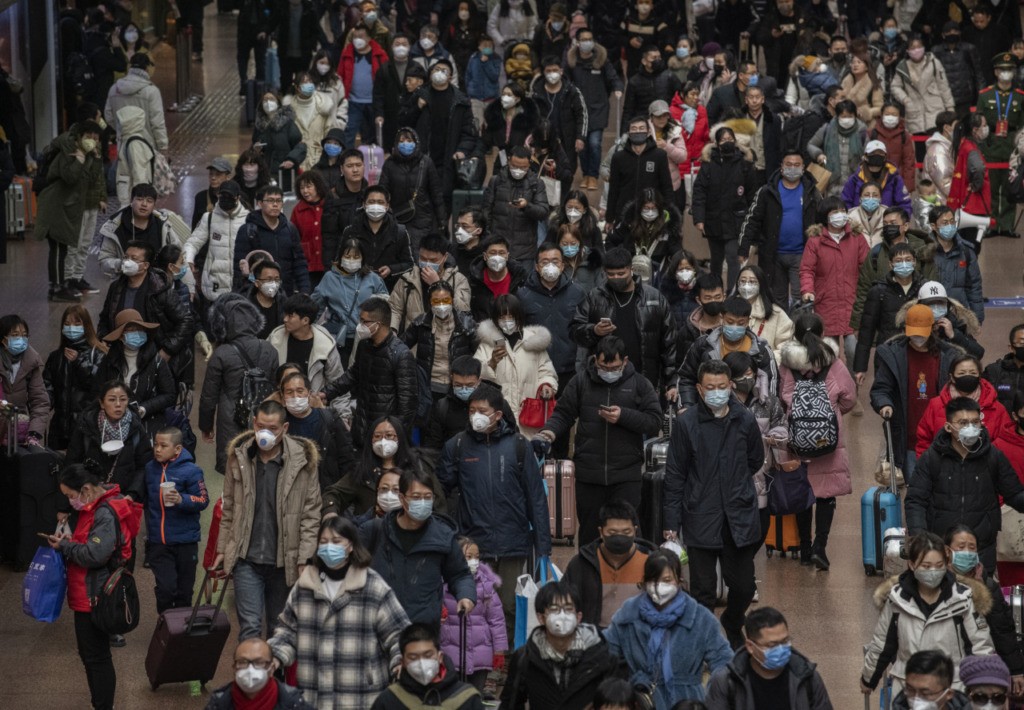 Chinese passengers, most wearing masks, arrive to board trains before the annual Spring Festival at a Beijing railway station on January 23, 2020 in Beijing, China. The number of cases of a deadly new coronavirus rose to over 500 in mainland China Wednesday as health officials locked down the city of Wuhan in an effort to contain the spread of the pneumonia-like disease. Medicals experts have confirmed that the virus can be passed from human to human. (Kevin Frayer/Getty Images)

According to sources close to the couple who spoke with RFA, the hospital did not test either patient for the virus and has done nothing to isolate potential contacts, even those who have come forward and requested quarantine.

“A group member surnamed Zeng confirmed the news to RFA, saying Xu’s remains had been cremated almost immediately after his death,” RFA reported. “A friend of Xu’s who gave only his surname Liu said neither Xu nor his wife had been tested for the novel coronavirus (nCoV) that has killed 17 people in Wuhan, and that the couple’s daughter hadn’t been placed in isolation.”

“When she took her father to the hospital yesterday afternoon [Jan. 22], the hospital wouldn’t take him,” Liu reportedly told RFA. “Her father died last night, and she thought that the Centers for Disease Control and Prevention (CDC) would help her, but that didn’t happen. The authorities didn’t care about it at all, and the doctors were no longer bothering with her.”

The sources noted that the deaths will soon result in a funeral gathering which could spread the virus further. Xu’s daughter appears not to have obvious symptoms of infection, but given the little information available about the virus’s behavior, this does not discount the possibility of her being a carrier.

RFA confirmed with Wuhan’s disease control center that they were rejected individuals who requested isolation or testing for the virus based on observed symptoms and only taking in those approved by health officials at other hospitals, which are controlled by the communist regime.

Friends of Nature dedicates itself to raising awareness for environmental protection and advocating for protecting endangered species and against pollution. Chinese state media has noted the group in the past for its work in opposing government infrastructure projects that could harm endangered species, placing it at odds with the authoritarian communist regime.

China is the world’s biggest polluter, responsible for more greenhouse gas emissions than any other country and 73 percent of the garbage dumped into the Atlantic Ocean. Beijing is also responsible for an outsized amount of global plastic waste and dedicated to building fossil fuel projects around the country that harm locals’ air quality. A group protesting China on environmental grounds – particularly given the fate of protests against dictator Xi Jinping from Maoist student groups, factory workers, and alarmed parents – poses a threat to the stability of the regime.

“Anyone posting information and comments online should abide by [China’s] laws and regulations,” police said in a statement. “The police will investigate and punish anyone fabricating and spreading rumors and disrupting social order.”

The police department did not elaborate on how they “handled” or “punished” the unnamed individuals, or if those individuals remained in police custody at the time of the statement.

In addition to raising concerns about Beijing using the virus to silence dissent, Xu’s death suggests that China is deliberately failing to document viral cases to hide the true scope of the disease’s range. The Epoch Times, a newspaper often critical of the communist regime, noted on Wednesday that official government channels have contradicted themselves on the number of cases documented nationally on multiple occasions.

On Wednesday, for example, the National Health Commission announced 440 documented coronavirus patients nationwide while the national television network claimed 444 confirmed cases in Hubei, the province for which Wuhan serves as capital, alone. Similarly, the official tally out of Huanggang, one of the isolated cities, was 109 cases, compared to the 12 Chinese state television claimed there were.

Shocking videos posted by dissidents online and allegedly from a hospital in Wuhan showed unattended patients collapsed in a hallway, suggesting a lack of care on the part of health officials.

Virologists are warning that the exponential growth of the number of cases identified per day suggests that the virus is highly contagious.

“My conservative estimate is that this epidemic could end up at least 10 times the scale of SARS [severe acute respiratory disease],”

Guan Yi, director of the State Key Laboratory of Emerging Infectious Diseases at Hong Kong University, told China’s Caixin magazine, according to the South China Morning Post. Guan argued that the Chinese regime moved too late to isolate Wuhan. The Post noted that nearly 300,000 people left Wuhan on Wednesday before the official lockdown notice on trains.