China’s People’s Liberation Army (PLA) will deploy to central Wuhan, the metropolis where a previously unidentified coronavirus that has killed at least 26 people originated, to help build medical facilities to fight the virus, the Communist Party confirmed on Friday.

The World Health Organization (WHO) has confirmed 902 cases of the Wuhan virus worldwide, the overwhelming majority of them in China. All 26 deaths also occurred in China. Health authorities have isolated confirmed cases of the virus throughout Asia – in Singapore, Japan, South Korea, Vietnam, Thailand, Taiwan, Hong Kong, and Macau – as well as Italy and the United States. The international cases are all Wuhan residents abroad or locals who recently visited Wuhan.

The People’s Daily, the official newspaper of the Communist Party of China, noted that the number of suspected cases surpassed 1,000 as of Friday.

Those numbers may be significantly deflated, however, as reports surface from Wuhan and elsewhere in China of doctors refusing to test individuals suffering from and dying of pneumonia, which the virus is known to cause. Individuals who suspect they may be carrying the coronavirus have revealed anonymously that Wuhan hospitals have turned them away when requesting testing.

Coronavirus is a family of viruses that includes the one responsible for the 2003 outbreak of Sudden Acute Respiratory Syndrome (SARS), which killed nearly 800 people. The Communist Party’s refusal to act to publicly contain the virus and repeated denials of the scale of the contagion contributed significantly to the high death toll.

For this outbreak, the Communist Party has insisted that it has been diligent and transparent in combatting the public health threat since identifying the virus and sharing the genome sequence with global scientists on Monday. 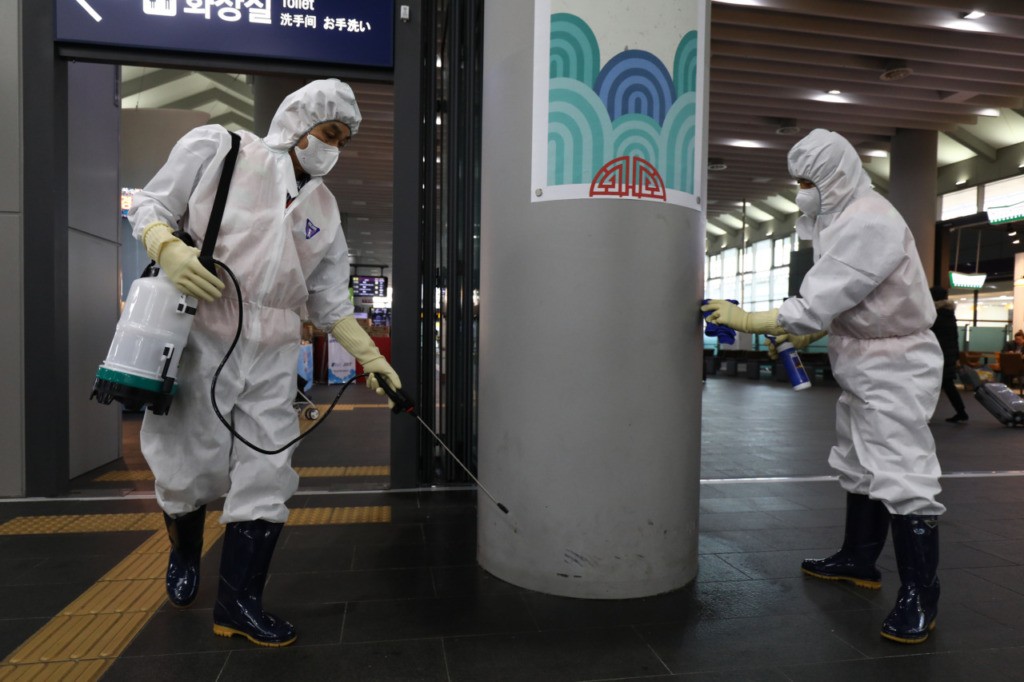 Disinfection workers wearing protective gears spray anti-septic solution in an train terminal amid rising public concerns over the spread of China’s Wuhan Coronavirus at SRT train station on January 24, 2020 in Seoul, South Korea. The number of cases of a deadly new coronavirus rose to over 800 in mainland China as health officials stepped up efforts to contain the spread of the pneumonia-like disease which medicals experts confirmed can be passed from human to human. ( Chung Sung-Jun/Getty Images)

“Acting with openness, transparency and a high sense of responsibility to global health security, Chinese authorities will continue to share information of the epidemic with the WHO [World Health Organization], relevant nations and China’s Hong Kong, Macao and Taiwan regions in a timely manner,” Chinese Foreign Ministry spokesman Geng Shuang told reporters on Thursday. “We believe the WHO Emergency Committee will have fair, fact-based and reasonable evaluation and judgment on the situation.”

Reports indicate that Wuhan residents and doctors were aware of a spreading respiratory infection in December and that Chinese authorities underplayed the virus’s potential to spread to health professionals, who subsequently contracted the disease.

“The Chinese military are being deployed to help control Wuhan Coronavirus. 40 medical personnel of troops in Wuhan have been dispatched to a civilian hospital,” the newspaper announced. The South China Morning Post specified that the military will be helping Wuhan Pulmonary Hospital’s intensive care unit treat patients and organize its treatment centers.

Soldiers will also presumably help keep Wuhan and the other seven impacted cities on lockdown amid reports that Chinese people from the epicenter of the outbreak have used fever-reducing medicines to thwart temperature checks. China has canceled nearly every major Lunar New Year festivity and shut down major tourist attractions like parts of the Great Wall, Beijing’s Forbidden City, and Shanghai Disneyland.

The PLA will also likely help Wuhan police silence any unauthorized anti-communist speech. Wuhan police threatened individuals this week to limit their public discussion of the virus, announcing they had “handled” eight individuals for unauthorized speech. They did not elaborate on what “handling” the people affected meant.

The military is arriving in Wuhan as reports grow of Wuhan health officials, blindsided by the virus, increasingly being infected with it. China claims only 15 health workers have contracted the virus – 14 of them allegedly from the same patient – after initially insisting no evidence suggested the virus could jump from person to person and only those exposed to the animal carrier of the new virus could contract it. Anonymous health workers told the South China Morning Post they believe Beijing is not reporting all cases of health workers carrying the virus and refusing to test many who show clear symptoms of being infected.

“You can find infected medical practitioners in almost all major hospitals in Wuhan. The number is certainly far higher than 15,” one anonymous doctor said.

Another said “many were not initially informed about the potential for people-to-person transmission” and failed to use protective gear. Perhaps even more alarmingly, that also meant the hospital’s patients were not isolated from virus carriers, exposing individuals in potentially delicate condition to a virus now confirmed to be deadly in some cases.

The lack of care in containing patients recalls the mystery surrounding the death this week of the founder of China’s largest environmentalist group of “pneumonia.” Xu Dapeng, who founded the Friends of Nature NGO, died of a respiratory illness this week, reportedly ten days after his wife died of a similar condition. According to Radio Free Asia (RFA), friends of the couple report that Wuhan health workers refused to test either of them for the coronavirus and turned away their daughter, who went to a hospital for testing given her proximity to her parents. Hospital officials reportedly told her they could not test anyone, even if they showed symptoms of coronavirus, unless another hospital had referred the patient.