A Wuhan resident from Bogotá told Colombian newspaper El Tiempo on Thursday that residents of the Chinese metropolis were aware of a flu-like illness spreading “before 2019 ended,” weeks before the Communist Party publicly revealed an outbreak of a newly documented deadly coronavirus.

The Chinese communist regime officially alerted the World Health Organization (WHO) of a mystery virus on December 31 but state media were insisting the virus was “no need to panic” as recently as last week. Authorities announced they had sequenced the virus’s genome and shared it with global health professionals on Monday.

As of Friday, 26 people have died after being exposed to the virus and over 900 tested positive as carriers. Anonymous reports from doctors and other medical professionals in Wuhan suggest that Communist Party officials are actively refusing to document suspected cases, rejecting patients with symptoms requesting virus testing, and identifying some victims as simply carrying “pneumonia” without noting an origin.

Wuhan police have also “handled” eight cases of individuals sharing information about the virus on social media, without elaborating on the fate of these people or how they “handled” the cases. The police instead threatened locals to stay silent online.

The virus causes respiratory illness – fever, cough, body aches, and other traditional cold symptoms. Many patients are later diagnosed with pneumonia as a result of the disease.

In an attempt to appear diligent in protecting the population of the central regional capital from the new health threat, the Party has instituted a lockdown on Wuhan and seven other cities, most near the epicenter of the disease. Wuhan is a city of 11 million people; its greater metropolitan area is home to nearly 20 million. Wuhan is also a pivotal transportation hub for the country, home to a highly trafficked international airport and a connecting stop for the nation’s sprawling railway system.

In his remarks to El Tiempo, Colombian student Carlos Oliveros suggests that the disease has hovered over the city for weeks. Oliveros, one of a very small number of Latin Americans in the city, has lived in Wuhan for six months as a graduate student at the University of Wuhan. He remains on campus and described a state of total surveillance in which nearly every building he enters has installed temperature scanners and health officials are going door-to-door reading security protocol. 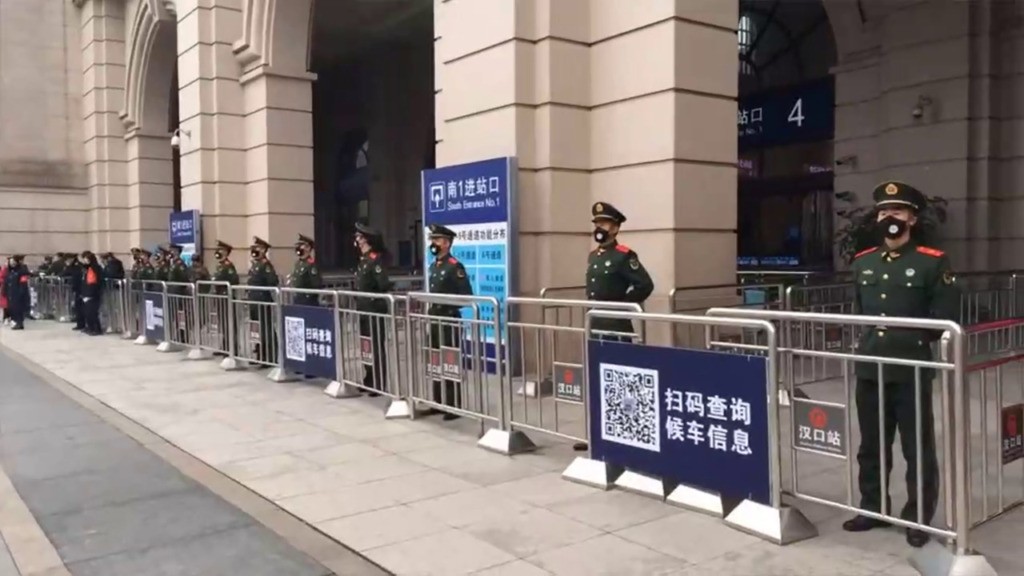 Chinese paramilitary police stand guard outside the closed Hankou Railway Station in Wuhan in central China’s Hubei Province, Thursday, Jan. 23, 2020. China closed off a city of more than 11 million people Thursday in an unprecedented effort to try to contain a deadly new viral illness that has sickened hundreds and spread to other cities and countries in the Lunar New Year travel rush. (The Paper via AP)

“Carlos began to hear, before the end of 2019, of a strong cold that had struck some in Wuhan in the middle of the winter,” the Colombian newspaper reported. “Rain is constant and temperatures reach zero degrees (celsius) during the nights, so the sickness appeared normal at the time.”

He noted that authorities first responded by shutting down a popular seafood and live game market now believed to be the location where the virus first jumped from animal meat to humans. The market has been closed since January 1. By this week, health officials had placed temperatures scanners in nearly every public area and shut down restaurants and other public spaces.

“There are scanners in every public place, every time you enter an establishment you have to go through these body temperature measuring devices,” Oliveros told the newspaper. “Before you go into a public area they make you go through. I think it’s something similar to the fear that Colombia went through during H1N1 [commonly known as Swine Flu, spreading in Colombia in 2018], but here they take more serious measures.”

Oliveros noted that only campus restaurants appear to be open and that the city is largely desolate, but that Wuhan often empties out for the Lunar New Year. As it is a major economic hub, many residents are transplants who return to their families for the biggest celebration of the year. Oliveros noted that while he only knew of three other Colombians in the city, Wuhan is “one of the most multicultural cities in the country, frequented by Arabs, Africans, Russians, Spaniards, and Thais.”

The diverse nature of the city has put the world on high alert. As of Friday, the virus has spread to many other countries of Asia, including Taiwan, Japan, Thailand, Vietnam, Singapore, and South Korea. Italy and the United States have also confirmed cases.

Suspicions that a stronger response on the part of Beijing could have avoided such a global concern have surfaced, particularly in light of the fact that health officials considered the virus enough of a threat to alert the WHO in December and shut down the suspect market at the end of the new year, but still organized enormous public gatherings that could facilitate an epidemic. On January 18, 19 days after considering the virus enough of a problem to bring it to the attention of the global public health governing body, the Baibuting neighborhood of Wuhan organized its 20th annual Lunar New Year dinner, bringing together 40,000 families who cooked and brought from their homes 13,986 different dishes.

The sharing of food and drink by tens of thousands of people in close quarters could significantly strengthen the probability of an epidemic in the face of a present communicable disease. Even more alarming, the dinner caters to older “empty nesters” whose children are not in Wuhan for the holiday, meaning a high concentration of potential high-risk patients.

Multiple anonymous reports from health workers in Wuhan have also undermined Beijing’s insistence it is managing the outbreak properly. Speaking to the South China Morning Post, unnamed doctors said they did not have the proper equipment to handle the high volume of patients and that their superiors did not properly warn them of the threat of the virus spreading from human to human. The result: a much larger number of health workers infected than the 15 the Chinese regime alleges and a hospital where many patients interned for other reasons were not adequately protected from exposure to coronavirus carriers.

The American outlet Radio Free Asia (RFA) also reported on the bizarre death of Chinese environmentalist Xu Dapeng this week of “pneumonia.” Xu and his wife, who died ten days before him, reportedly shared symptoms with coronavirus carriers, but doctors refused to test either of them or their daughter, who is still alive. Hospital officials told the daughter, who asked specifically to receive testing for the new virus, that they could not test walk-in patients, only those hospital officials had approved. Xu and his wife are not among the 26 official deaths on record.

“Hospitals and authorities said the spread of the disease is no cause for panic and none was witnessed in the affected cities and hospitals that were visited by reporters has been felt at the scenes,” the Global Times, a state propaganda outlet, declared last week.

“There is no need to overreact. If you haven’t been in contact with someone with a fever or haven’t been to Wuhan, there is little chance you will get infected,” an unnamed nurse said in the newspaper.

The WHO praised China for its alleged transparency in a press statement on Thursday.

“I would like to thank the Government of the People’s Republic of China for its cooperation and transparency. The government has been successful in isolating and sequencing the virus very quickly, and has shared that genetic sequence with WHO and the international community,” WHO Secretary-General Tedros Adhanom Ghebreyesus told reporters. “This outbreak was detected because China had put in place a system specifically to pick up severe lower respiratory infections. It was that system that caught this event.”