Three U.S. warships in the South China Sea have been joined by a frigate supplied by ally Australia to patrol an area where a Chinese vessel is suspected to be illegally exploring for oil, officials said Wednesday.

The move came two days after China’s Ministry of Civil Affairs and Ministry of Natural Resources released “standard” names for 80 geographical features in the resource-rich South China Sea, in an act claimed to be “reaffirming China’s sovereignty in the region.”

The U.S. supports Asian nations blocked by China from exercising control over their lawful territory by regularly sending warships and aircraft to operate in the contested areas.

Most recently, the U.S. sent two military aircraft to fly near Taiwan on April 13 after China conducted military drills in and around Taiwanese waters and airspace.

Now the U.S. Navy has confirmed the USS America amphibious assault ship and the USS Bunker Hill, a guided missile cruiser, were also operating in the South China Sea.

They were joined by Australia’s frigate HMAS Parramatta and a third U.S. vessel, the destroyer USS Barry, as part of a planned joint exercise, the Australian defence department said.

The U.S. Navy also confirmed the deployment of its assets:

The #USNavy's #USSBunkerHill, #USSBarry, and #USSAmerica transit the #SouthChinaSea while operating in @US7thFleet as an Expeditionary Strike Group in support of security and stability in the Indo-Pacific region. #FreeAndOpenIndoPacific pic.twitter.com/V7mStcYnwG

The manoeuvring in the South China Sea was announced days after China bolstered its presence by setting up two administrative bodies on islands in the disputed water, dubbing the area “its youngest city”.

China claims almost all of the South China Sea as its own territory, even though parts of it are also claimed by six other countries and the claims have no standing under international law.

China is an international criminal according to a harsh July 2016 ruling by a tribunal at the United Nations Permanent Court of Arbitration in the Hague.

The judgement eviscerated all of China’s claims to the South China Sea and declared its construction of artificial islands and military bases in international waters in the region to be illegal.

In March, Beijing continued to ignore that international precedent by occupying artificial reefs in territory claimed by the Philippines and others.

Last year, HMAS Parramatta was part of an Australian Task Group that was closely tracked by the Chinese military as it made its way through the Indo-Pacific region. 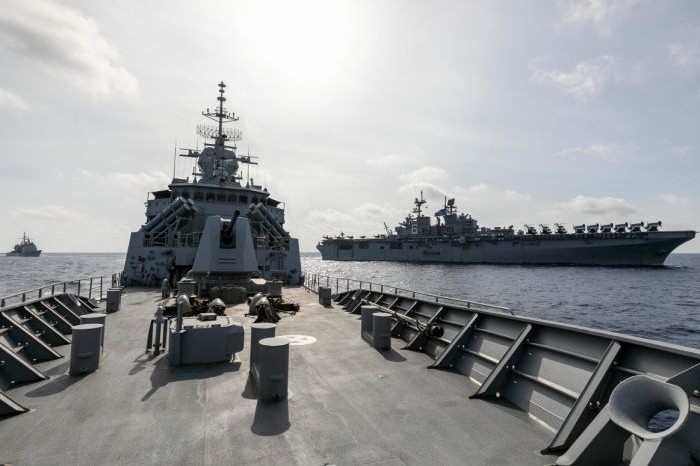 Despite the emergence of the coronavirus pandemic in January, Australian officials have been closely watching as Beijing ramps up its activities in the strategically important region.

Earlier this month, Vietnam lodged an official protest with Beijing after the sinking of a Vietnamese fishing boat it said had been rammed by a China Coast Guard vessel near the Paracel Islands.

In 2018 Australia claimed it had a “perfect right” to sail naval assets through the South China Sea. The assertion was made after the Chinese navy challenged three Australian warships on why they were in the area, as Breitbart News reported.