President Donald Trump signed the Uyghur Human Rights Policy Act into law on Wednesday, requiring sanctions on Chinese officials participating in the mass incarceration of ethnic Uyghurs and other Muslim minorities in the country in concentration camps, where they reportedly endure slavery, rape, organ harvesting, and other atrocities.

The law – according to the World Uyghur Congress (WUC), one of the world’s largest organizations advocating for the human rights of the Uyghur people – is “the first legislative initiative to take concrete action to end the Uyghur crisis and hold those responsible for atrocities accountable.”

The text of the law requires President Trump to “periodically report” a list of entities and people participating in the violent repression of the Uyghur people.

“The President shall impose property-blocking sanctions on the identified individuals and entities and visa-blocking sanctions on the identified individuals,” the law states. It prevents the president from revoking these sanctions without approval from various Congressional entities, which President Trump said in a statement he would consider as “advisory” as Congress does not have constitutional powers over executive sanctions.

The law also requires the FBI and other law enforcement to protect Uyghur-Americans by targeting individuals who “harass, threaten, or intimidate” them, a safeguard against Chinese government agents who have for years pressured Uyghurs, and Uyghur journalists in particular, into silence by threatening their relatives at home.

The Uyghur Human Rights Policy Act also provides for government action to punish corporations that sell goods made by Uyghur and other minority slaves in China.

The Chinese Communist Party has for years imposed local policies in Xinjiang, its westernmost province and home to most ethnic Uyghurs, aimed at eradicating Uyghur culture and replacing it with Han identity, the dominant ethnic group in eastern China. Among those policies are the banning of Islamic names, prohibitions against wearing Islamic garb in public, and flooding mosques with communist propaganda. More intense attempts at eradicating Uyghur culture include the destruction of generations of monuments in Uyghur cemeteries and forcing Han “relatives” to live in Uyghur homes and sleep in the beds of Uyghur women whose husbands have been taken away to concentration camps.

Global authorities believe that the Communist Party began building concentration camps for Uyghurs and other Muslim minority members, like Kazakhs and Kyrgyz people, in 2017, flooding them with as many as 3 million people. As of April, American observers believe that 2 million prisoners remain in the camps. 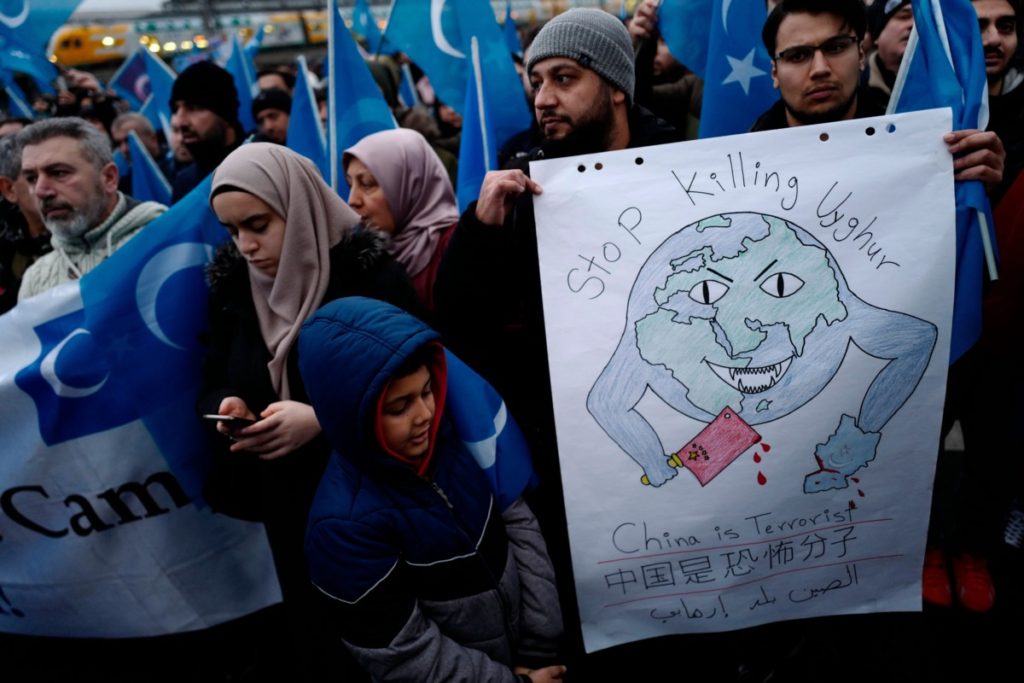 Demonstrators hold a poster reading “Stop Killing Uyghur – China is Terrorist” as they take part in a protest outside the Chinese embassy in Berlin to call attention to China’s mistreatment of members of the Uyghur community in western China. (JOHN MACDOUGALL/AFP via Getty Images)

Chinese Communist Party officials claim the camps are “vocational training centers” where underprivileged minorities learn job skills that help them compete in the Chinese economy. Survivors of the camps say they endured communist indoctrination, forced sterilization, forced abortion, rape, electroshock torture, and medical analysis to determine if their organs could be sold on the black market.

The population of China’s concentration camps diminished in December, when Chinese officials announced that many of the prisoners had “graduated” from their “vocational programs.” In reality, reports later revealed that the prisoners had simply been moved out of Xinjiang to work as slaves in factories throughout China, pivotal cannon fodder to keep the Chinese economy running during Chinese coronavirus-created lockdowns.

“We are deeply grateful to the U.S. government for passing this important act,” Dolkun Isa, the president of the WUC and frequent target of Beijing harassment, said in a statement on Wednesday. “If we are to ease the suffering of the Uyghur people, we must move beyond words of sympathy and support, to targeted and meaningful action. I urge other governments around the world to pass similar pieces to legislation to let the Chinese government know that the world will not sit idly by while it commits crimes against humanity.”

In a separate statement, the WUC itself particularly applauded “greater protection and support for the Uyghur diaspora community in the U.S.”

“The WUC hopes the Act stands as an example to governments around the world of the type of proactive and substantive measures necessary to bring an end to the atrocities being committed by the Chinese government in East Turkistan,” the organization stated, referring to Xinjiang by the name many Uyghurs prefer for the region. “We must build on the momentum generated by the passage of the Uyghur Human Rights Policy Act and call on parliamentarians around the world to pass similar legislative initiatives in their own national contexts.”

“This is the first bill in the history of the Uyghur people being put in place to protect their political, social, and religious rights,” Nury Turkel, a Uyghur-American attorney and member of the U.S. Commission on International Religious Freedom (USCIRF), said following its signing. “It’s particularly significant in light of the fact that it received bipartisan and bicameral support, showing that the American people and the U.S. government are seriously concerned about the Uyghur crisis, entering its third year.”

China’s Foreign Ministry reacted with outrage to the passage of the bill.

“The bill defames human rights situation in Xinjiang, attacks the Chinese government’s policies to Xinjiang, tramples on international law and basic norms governing international relations and interferes in China’s internal affairs,” the Foreign Ministry reportedly said in a statement, according to the Communist Party newspaper the People’s Daily.