WASHINGTON, DC – Uyghur Muslims wearing masks decorated with the flag of their native East Turkestan protested on Friday outside of the Department of State against their persecution and that of other religious minorities in China.

The peaceful protesters also carried flags representing East Turkestan — a once-independent nation state that was taken over by China in a 1949 invasion — and signs with photographs of missing relatives and others that said “Uyghur Lives Matter.”

The protest – which occurred in tandem with similar events around the world – was organized by the Uyghur-led government in exile of East Turkestan. China bars that government from operating, instead granting power to the ethnic Han regional leadership of the Communist Party.

Uyghur activist Haidr Jan spoke at the protest calling on support for Uyghurs exiled around the world, including in the United States, for their effort to hold China responsible for the placement of Uyghurs, Kazakhs, and other Muslim ethnic minorities in concentration camps, where they have endured indoctrination, torture, slavery, and murder.

“We call for the international community to take action against the 21st Century Holocaust,” Jan said. “China has been engaging in a brutal campaign of colonization and genocide in East Turkistan.”

Jan said that China has put as many as 3 million religious minorities in “concentration camps, prisons, and labor camps,” a number verified by the Pentagon.

Jan said the East Turkestan’s government in exile – a parallel structure run by Uyghurs, as opposed to the Xinjiang government dominated by Han members of the Communist Party – is calling on the International Criminal Court to investigate China’s human rights abuses. 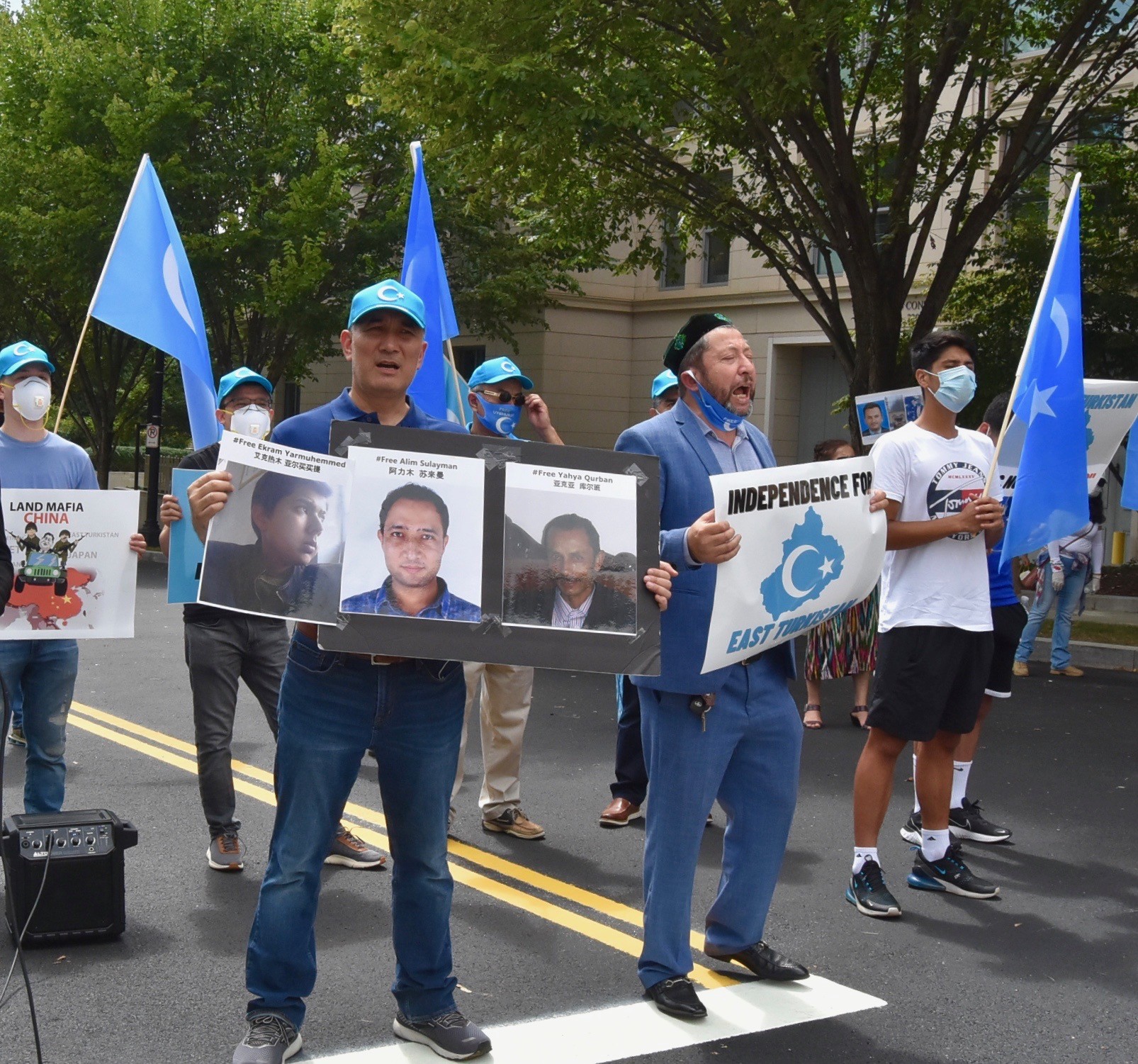 Aziz Suleyman held pictures of his relatives who are missing in his homeland of East Turkestan (Xinjiang) at a protest on August 28, 2020, in Washington, DC. (Penny Starr/Breitbart News)

Aziz Suleyman, who also attended the protest, escaped East Turkestan in 2009 and has lived in Virginia for ten years. His mother, five brothers, and sister are still in China — he hopes.

“Since 2016, I’ve had no communication with them. I don’t know their whereabouts,” Suleyman told Breitbart News. “My mother is 76 years old now. I don’t know if she’s alive or not. It’s terrible.”

Suleyman said his brother-in-law was sentenced to prison because of his wealth.

His nephew was sentenced to ten years in prison for selling Uyghur language books. The Uyghur language is of Turkic origin and his little linguistic ties to Mandarin, the dominant language of the Communist Party. Communist officials have largely banned Uyghur language in Xinjiang, forcing those in concentration camps to learn Mandarin and imposing Mandarin in schools.

Jan said at the protest that his community wants the “East Turkistan people to regain their freedom and independence.”

China has built at least 1,200 concentration camps in East Turkestan, according to a Reuters exposé published in December 2018. Human rights experts believe that the camps are currently holding at least one million people, as thousands have departed the camps to engage in slave labor in factories affected by the Chinese coronavirus pandemic. Evidence has surfaced that dozens of large multinational companies like Nike, Apple, BMW, and Nintendo are benefitting from this slave labor, as they manufacture products in factories that took in Uyghur slaves. Many of these companies, after being exposed in an extensive report published in March, insisted they had no idea the factories they had contracted with were using Uyghur labor, as many were located far from Xinjiang, and that they would immediately sever any ties to implicated companies.

Survivors of the camps say that they are forced to abandon their Islamic faith, eat pork, sing songs of worship for dictator Xi Jinping and the Communist Party, and learn Mandarin. Some say they have been forcibly sterilized, had their infants killed, and endured rape and other torture. Evidence exists that Communist doctors profile the camp prisoners for live organ harvesting.