WASHINGTON, D.C. — Mihrigul Tursun wept as she told reporters at a press conference in Washington, DC, on Monday about her months of internment at what she called a Chinese “concentration camp.”

Tursun said she was repeatedly stripped naked and interrogated, forced to take drugs, and made to subsist on a starvation diet of bread and broth — all while being separated from her infant triplets, one of whom died at the hands of doctors whom she said force-fed the children through a shunt in their necks.

Tursun is a Uighur Muslim, one of what could be millions of members of ethnic and religious minorities imprisoned in what the Communist Chinese government is defending as “training centers” where individuals are taught the Mandarin language and Chinese culture.

Tursun, 29, said that, as a 12-year-old, Chinese authorities took her from her family to attend a Chinese school. Her internment as an adult began after she studied in Egypt, where she met and married her husband and gave birth to triplets — two boys and a girl.

When she returned to her family in the western Xinjiang region of China to get help caring for her children, Tursun says she was arrested and government officials took her children.

The next time she was allowed to see her children, she was told one of her sons had died after what she believes was force-feeding.

Tursun said she was stripped naked, interrogated for days without sleep about her activities in Egypt, had her head shaven, and was subjected to an intrusive medical examination after her second arrest in 2017. When she was arrested a third time, the treatment became even more brutal.

“The authorities put a helmet-like thing on my head, and each time I was electrocuted, my whole body would shake violently and I would feel the pain in my veins,” Tursun told reporters through a translator at the National Press Club. 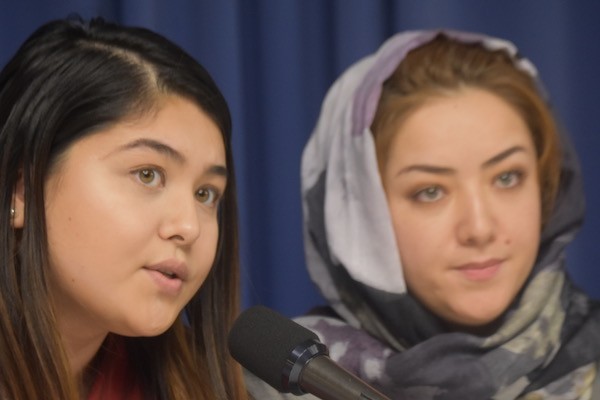 A translator helped Mihrigul Tursun, right, speak at the National Press Club about her internment and torture at the hands of Chinese officials in western China. (Penny Starr/Breitbart News)

“I begged them to kill me,” Tursun said.

Tursun also wept when the translator shared her witnessing the death of others in the camp, some of whom she said were gravely ill but were denied medical treatment.

The detainees were forced to chant praise for Chinese dictator Xi Jinping and were punished if they could not accurately speak or sing the pro-government message, Tursun said.

Tursun appeared with representatives of 278 China scholars from around the globe who held the press conference to announce a statement they signed calling on China to shut the camps and stop the persecution of  Uighur Muslims, Tibetan Buddhists, Falun Gong practitioners, and other ethnic and religious minorities.

“Academia has lost its moral grounding,” Timothy Grose, an assistant professor in Chinese Studies at Rose-Hulman Institute of Technology in Indiana, told reporters of what motivated he and other academics to join the campaign.

The news of the mass internment of Uighurs in China is finally getting attention from the international community, the panel of scholars said at the press conference.

Al Jazeera reported that, in August, the United Nations Human Rights Council received credible reports that one million or more Uighurs and other minorities were being held in what appeared to be “massive internment camp that is shrouded in secrecy.”

Thanks to a journalist with Radio Free Asia (RFA), who alerted the United States of Tursun’s plight after she was allowed to take her children back to Egypt, she escaped her planned return to China. The State Department worked with the Egyptian government to allow Tursun to come to the United States where she is now living with her son and daughter.

Tursun thanked Americans and the U.S. State Department for saving her life and those of her children and said she has lost contact with her family and feels extreme guilt about their fate, but said she had to tell the truth about what is going on in China.

That truth-telling includes testifying at a Congressional Executive Committee on China hearing on Wednesday in Washington, DC, where Tursun will join other religious minorities who will share their stories about persecution in China.

The co-chairmen of the committee — Rep. Chris Smith (R-NJ) in the House and Sen. Marco Rubio (R-FL) in the Senate — have introduced the Uyghurs Human Rights Act of 2018, which calls on China to stop persecuting its citizens because of their religious beliefs and other actions.

“The current assault on religion in China is the most comprehensive effort to manipulate and control religious communities since the Cultural Revolution as the Communist Party of China expands its efforts to systematically transform the very nature of religious communities viewed as threats to the Communist Party dominance—Christians, Muslims, and Tibetan Buddhists in particular,” Smith said at a commission hearing on the issue in July.

“The jailing without charges of over a million Uyghurs and other Muslims is a staggering affront to human dignity and international law,” Smith said. “The [Trump] administration has taken the lead in denouncing publicly what China is doing to the Uyghurs and the bipartisan Uyghur Human Rights Act allows the Administration to coordinate efforts to respond across different agencies.”

The panel at the press club called on governments around the world to put sanctions in place against the Chinese government and said universities should end their partnerships with Chinese educational entities until the camps are closed.

“It is the intention of the organizers of this action to continue to collect signatures to this statement from academics around the world as a means of demonstrating our grave concern regarding this mass internment and psychological torture of innocent civilians on the basis of the ethnic identity and religion,” the statement reads.

Chinese authorities have denied that the internment camps exist but say petty criminals are sent to “employment training centers.”

The State Department estimates that since April 2017, the Chinese government has detained 800,000 to possibly more than 2 million Uighurs, Kazakhs and other Muslims in political re-education camps.

“The United States will continue to call on China to end these counterproductive policies and free all those arbitrarily detained,” the State Department said. “We are committed to promoting accountability for those who commit human rights violations and abuses, including by considering targeted measures against Xinjiang officials.”