The view of China in general and President Xi Jinping in particular has soured in the past year across the United States and a host of other advanced economies, according to a survey of 14 countries released Tuesday by the Washington-based Pew Research Center.

The polling, conducted between June and August this year, found a clear majority in each of the countries polled had an unfavourable opinion of China.

In all, 14,276 adults were polled by telephone, with China’s bungled response to the coronavirus pandemic driving negative sentiment coupled with the Chinese Communist Party’s embrace of aggressive “wolf warrior” diplomacy.

In Australia, Britain, Germany, the Netherlands, Sweden, the United States, South Korea, Spain and Canada, negative views reached their highest points since Pew began polling on the topic more than a decade ago. 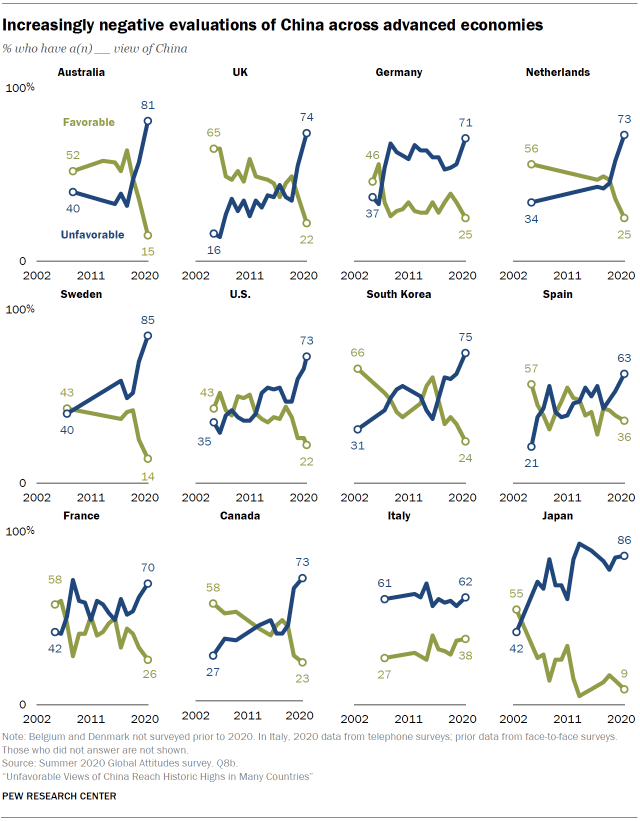 According to Pew, the rise in unfavorable views comes amid widespread criticism over how China has handled the coronavirus pandemic. Across the 14 nations surveyed, a median of 61 percent say China has done a bad job dealing with the outbreak.

The view from Japan is particularly grim for Beijing,  where 86 per cent have an unfavourable view of China. Just over half of Japanese surveyed had a “very unfavourable” view of China, with Australia second with 45 per cent.

“Japan also stands out as a country where less than 0.5 per cent of the public — effectively no one — reports having a lot of confidence in China’s President,” the authors said in their report.

This is many more than say the same of the way the COVID-19 pandemic was handled by their own country or by international organizations like the World Health Organization or the European Union. 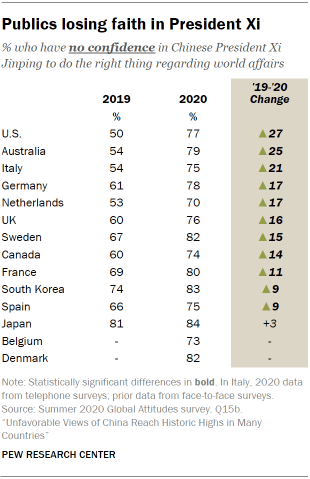 A median of 78 percent say they have not too much or no confidence in him to do the right thing regarding world affairs, including at least seven-in-ten in every country surveyed.

This lack of confidence in Xi is at historic highs in every country for which trend data is available except Japan and Spain. In most countries, the percent saying they have not too much or no confidence in him has grown by double digits since last year.

For example, in the Netherlands, whereas around half distrusted Xi last year, today 70 percent say the same – up 17 percentage points.

When it comes to economics, views are similarly wide.

Even while pluralities or majorities in most countries note China’s economic strength relative to the U.S., this opinion does little to color attitude toward China more broadly.

People’s own pocketbooks also have little bearing on their views of China, according to Pew.

In most countries surveyed, those with higher income levels are equally likely as those with lower levels of income to give the country low marks.1