ROME — Pope Francis has recognized the Chinese Communist Party’s (CCP) persecution of the Uyghur Muslims for the first time in a new book on life after COVID-19.

In his forthcoming book Let Us Dream: The Path to a Better Future, the pope states that “I think often of persecuted peoples: the Rohingya, the poor Uyghurs, the Yazidi,” in a striking departure from his unwritten policy of never criticizing China.

The CCP has placed an estimated one to three million Uyghurs and other ethnic minorities in concentration camps, where there are credible reports of genetic testing, organ harvesting, torture, and forced abortions.

While the pontiff regularly calls out human rights abuses around the globe, he has studiously avoided anything that could be interpreted as a slight by rulers in Beijing, and this is the first time he has ventured to include the Uyghurs among those who suffer persecution.

Last December, in his annual Christmas message, the pope offered up prayers for troubled regions around the globe, remembering all those who suffer persecution, and yet nowhere in the nearly exhaustive list was any mention of the persecution of religious believers in China or the ongoing Hong Kong pro-democracy protests.

Among the many held up for their suffering, the pope enumerated “the Middle East,” the “beloved Syrian people,” “the Lebanese people,” “Iraq,” “Yemen,” “the whole American continent,” “the beloved Venezuelan people,” “beloved Ukraine,” “the people of Africa,” “the Democratic Republic of the Congo,” “Burkina Faso,” “Mali,” “Niger,” and “Nigeria.”

Conspicuous by their absence were Chinese Christians, members of Falun Gong, Hong Kong protesters, or Uighur Muslims, all of whom have suffered ongoing repression from Beijing.

In 2017, Francis famously defended the China’s record of religious freedom under the CCP, just as human rights groups around the world were denouncing the regime for its egregious repression of religious practice.

In a lengthy interview with the Spanish daily El País, the Pope said he would love to visit China “as soon as they invite me,” something he said he had made clear to Chinese authorities.

“In China the churches are full,” Francis insisted. “You can practice your faith in China.”

Last year, Francis dodged questions from reporters regarding his opinion of the Hong Kong pro-democracy protesters, saying that such problems are occurring all over the world and that the Hong Kong situation is nothing special.

“I would like to go to Beijing. I love China,” Francis said.

The pope’s words echoed those of fellow Argentinean Bishop Marcelo Sanchez Sorondo, who runs the Pontifical Academy of Social Sciences in the Vatican, and who offered similar glowing praise for the Communist regime.

In early 2018, Bishop Sánchez Sorondo surprised the world by saying that China had created the best model of Catholic social teaching in practice today.

After visiting Beijing for the first time, Sánchez returned to the Vatican full of enthusiasm for the Asian country and confided to a journalist that “at this moment, the Chinese are the ones implementing Catholic social teaching best.”

The Chinese “look for the common good and subordinate other things to the general welfare,” Sánchez said in a glowing interview with Vatican Insider.

Bishop Sánchez’s remarks drew a sharp rebuke from China expert Father Bernardo Cervellera, director of AsiaNews, who called out the Argentinean for his ridiculous “exaltation” of Chinese society, which has “made the Catholic Church a laughingstock.”

In a caustic editorial titled “Bishop Sanchez Sorondo in Wonderland,” Father Cervellera said that Bishop Sanchez was completely taken in by Chinese authorities in his single visit there, being shown exactly what they wanted him to see and nothing else.

In his ignorance, Bishop Sanchez describes China as a wonderland “that doesn’t exist,” Cervellera wrote, in a fictional account of a land without slums, without drugs and without oppression.

Uyghur Muslims wearing masks decorated with the flag of their native East Turkestan protested on Friday outside of the Department of State against their persecution and that of other religious minorities in China. https://t.co/b9pkQ5Vi3H

“Let’s not even talk about religious freedom in China,” Cervellera declared. “Religious freedom should be a pillar of the social doctrine of the Catholic Church. We should perhaps suggest that the bishop read the daily news of violence, arrests of Christians, Muslims, Buddhists, abuse on domestic churches, and controls on official churches.”

“Maybe someone needs to tell Bishop Sanchez Sorondo that since February 1, with the implementation of the new regulations, all the unofficial churches have been closed and at least 6 million Catholics no longer have a place to meet,” he said.

“Furthermore, local authorities now forbid minors under the age of 18 from entering churches, even official ones. As one priest said, ‘China has transformed the church into a night club, only for adults,” the priest added.

Vatican watchers have attribute the pope’s silence on China’s human rights violations to his desperate wish to establish diplomatic relations with the Asian giant and to visit the country someday.

Last May, veteran Vatican journalist John L. Allen, Jr. declared that the Holy See was so anxious to charm Beijing into full diplomatic relations that it was willing to overlook a lot.

The Vatican is “covetous of a relationship with China, and often apparently willing to stifle objections and give away a great deal” in order to make this happen, Mr. Allen wrote.

In short, “the Vatican is moving full-steam ahead in its courtship of Beijing, with the ultimate prize remaining full diplomatic relations, a secure legal standing for the church, and partnerships on the global stage,” Allen wrote.

The Vatican signed a secret accord with the CCP in September 2018 regarding the naming of Chinese bishops, a move that elicited an avalanche of criticism at the time and has only been aggravated by ongoing CCP aggressions against Christians after the deal was signed.

The accord was renewed last month despite appeals from governments and human rights groups that begged the Vatican to reconsider its appeasement policy toward the Chinese.

Francis dreams of being the pope who will establish diplomatic relations with Beijing, and to achieve this goal he is willing to make “concessions,” declared French Vatican analyst Alban Mikozy on television last December.

“Pope Francis is a prudent man,” Mikozy said. “He pursues a dream: to be the sovereign pontiff who will restore relations between China and the Vatican.” 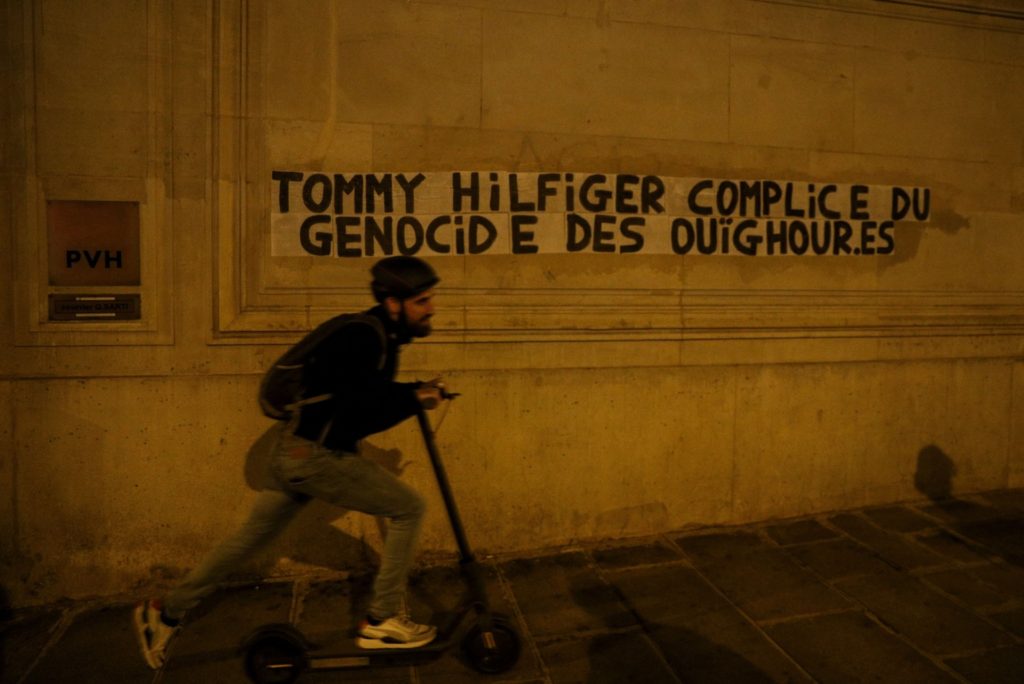 A man riding an electric scooter drives past a banner reading “Tommy Hilfiger complicit in the Uighurs genocide” in support of the Uighur population, pasted on a wall of the headquarters of the fashion brand Tommy Hilfiger in Paris.  France has called for a UN-led observer mission to evaluate the treatment of China’s Uighur population and accused Beijing of “indefensible practices” against the Muslim minority. (GEOFFROY VAN DER HASSELT/AFP via Getty Images)

“In order to do this, he is ready to make a few concessions: say nothing about Hong Kong, do not get too excited when the Chinese leader talks about rewriting the Bible,” he added, in reference to reports of retranslations of the Bible and other sacred texts to make them conform to Chinese Marxism.

Because of this overriding desire, Mikozy said, the pope has been willing to turn a blind eye to the CCP’s violations of religious liberty and other human rights issues.

This past July, Foreign Affairs published a scathing article noting how prominent Jews were willing to call out China’s atrocities toward Uyghur Muslims in contrast to the silence of the Catholic Church.

The president of the Board of Deputies of British Jews, Marie van der Zyl, has drawn comparisons between the plight of the Uyghurs in China today and the Holocaust, Benedict Rogers noted in his article, and yet no such indictment has been forthcoming from the Vatican.

“It is Francis’s silence that shocks me most,” Rogers wrote. “Almost every Sunday, as he prays the Angelus, he rightly references some injustice somewhere in the world. He has spoken often in the past not only of the persecution of Christians around the world but of the plight of the Rohingyas in Myanmar; the conflicts in Syria, Yemen, Ukraine, and Nigeria; and religious freedom for all.”

Writing in the Sunday Times last summer, Dominic Lawson expressed similar bewilderment over the Vatican’s stubborn unwillingness to call the CCP to account.

❌ Cut ties with Chinese sweatshops that might even be using Uyghur slave labor
✔️ Bow to the woke mob https://t.co/a0oYLPFtYf

“As more and more nations have expressed their concern about the growing evidence of concentration camps and even genocide in the Chinese province of Xinjiang, there has been silence from the one entity that has the whole of suffering humanity at the core of its mission. I refer to the Holy See,” Mr. Lawson wrote.

“This is part of the Holy See’s long campaign to achieve full mutual diplomatic relations with Beijing, which Vatican diplomats imagine will give them leverage with a leading world power,” Lawson added. “But it was a concession Francis’s predecessors would not have made — especially not the fiercely anti-communist John Paul II.”

Now, for the first time, there is the slightest glimmer of hope that this may be changing. Granted, a single line hidden away in a book — a simple acknowledgement of the sufferings of persecuted Uyghur Muslims — is not as powerful as a more formal declaration.

Yet when one has been on a starvation diet, a scrap is a feast.