The owner of Hong Kong anti-communist newspaper Apple Daily, Jimmy Lai, is facing a minimum of a decade in prison after being charged on Friday with violating the city’s new, and illegal, law against “national security” trespasses.

Prosecutors charged Lai, 73, under the law’s “foreign intervention” provision for allegedly having conversations with foreigners about the steep decline of respect for human rights in Hong Kong in the past year.

Apple Daily has developed a reputation for being one of Hong Kong’s most vocal publications criticizing the current government’s friendliness towards Beijing. The newspaper regularly covers Hong Kong police’s use of violence against peaceful dissidents and Lai himself became a regular during the anti-communist protests that erupted in the city in 2019.

The protests were a response to a proposed bill that would have allowed China to extradite people present in Hong Kong for violating Chinese law; the “national security” law effectively expands China’s powers in the city more than that legislation would have.

Lai was arrested in a violent raid of Apple Daily‘s offices in August.

The Global Times, a belligerent Communist Party propaganda outlet, celebrated the charges against Lai, calling him a “modern-day traitor” for embracing freedom and claiming Apple Daily participated in “instigating one of the most violent and chaotic riots in the city in 2019”

“To the fair-minded people familiar with the 72-year-old’s words and actions – and the grave consequences of them for the roughly 7 million residents in the city – he is a traitor,” the Global Times affirmed, “a criminal and a force of evil who has sowed violence and chaos in arguably one of the freest and most prosperous cities in the world.”

The Chinese propaganda outlet also clarified that the acts Lai conducted that led to his indictment were, in part, interviews with foreign news outlets and public statements urging the world to reject the Chinese Communist Party – not alleged secret meetings with hostile states.

Apple Daily itself reported on Friday that Lai’s crimes were, allegedly, his “acceptance of interviews and calls for sanctions from foreign governments.” The newspaper reported that Lai was in “good spirits” following his indictment but noted that supporters and those close to him have expressed fear that the conviction will result in his extradition into China. 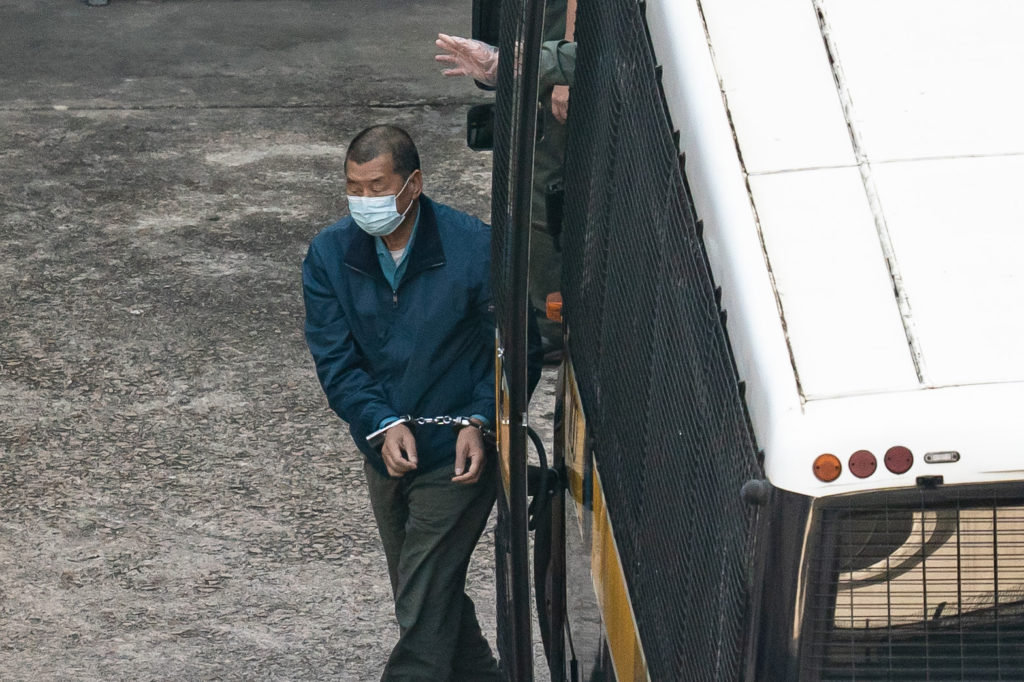 Hong Kong media tycoon Jimmy Lai, founder and owner of Apple Daily newspaper, arrives at Lai Chi Kok Reception Centre on December 3, 2020 in Hong Kong, China. Lai was remanded into custody after appearing in West Kowloon Court charged with fraud, with the case not due to be heard again until April 16. (Anthony Kwan/Getty Images)

“The security law, introduced by Beijing in late June, also enables Hong Kong authorities or the Office for Safeguarding National Security in Hong Kong to ask the central government to rule on whether a suspect should stand trial in Hong Kong or on the mainland [China],” Apple Daily noted.

The Chinese Foreign Ministry fielded concerns about the status of Lai’s case on Friday by asserting, “suppressing freedoms on the ground of national security is not what we do.”

“With regard to this specific case, this is not a diplomatic issue. However, since you mentioned whether this is a question of cracking down on freedom of speech, I think I need to make a reply,” spokeswoman Hua Chunying told a reporter from Japan’s Kyodo News agency. “After the implementation of the national security law in Hong Kong, the vast majority of people in Hong Kong feel safer and foreign enterprises in Hong Kong are confident about their future there.”

Hua did not address Lai’s case specifically, instead condemning the era of Hong Kong’s history in which the British ruled the city.

“All the Hong Kong governors back then were appointed by the Queen, and none of the Legislative Council members were nominated by the people of Hong Kong. So, what kind of freedom do they want?” Hua asked.

The raid on the offices of Apple Daily that resulted in Lai’s latest arrest in August featured 200 people officers attacking the building, an office where no evidence suggested that any journalists would be armed or hostile to law enforcement. The violent nature of the attack, in response to Apple Daily‘s coverage of the wave of peaceful protests against China in the city, prompted Hong Kong residents to mobilize to support the newspaper. Stocks belonging to Apple‘s parent company Next Media soared in value immediately after the raid and protesters mobilized to buy as many copies of the newspaper as possible as a gesture of support.

Lai himself, in an interview with BBC following his arrest, said that he felt he had a duty to stand up for Hong Kong’s rights and felt “relief” after accepting his fate.

“Once I accepted my destiny, all of a sudden, I felt the grace of God, the blessing of God, and I was totally relieved. And I left myself to my destiny and accepted it,” Lai, a Catholic, explained. “It was such a wonderful feeling. It was like God telling me, ‘Don’t fear, just do what you have to do, I’m with you.’”

“I am in my 70s and there was never a time when I felt so moved and so happy, knowing that I’ve been doing the right thing,” he concluded, while urging younger people to be “more cautious” in fighting communism.

Lai was born in China but smuggled himself into Hong Kong when he was 12, in 1960, and began working as a child laborer, ultimately saving enough money to start a business. As the head of Next Media, Lai promoted anti-communist voices and personally participated in events urging respect for democracy in the city. His advocacy has resulted in multiple violent attacks against him, including attempts to firebomb his home as recently as September 2019.