Nearly 200 police officers swarmed the offices of Apple Daily, one of Hong Kong’s most-read anti-communist newspapers, on Monday, arresting owner Jimmy Lai, two of his sons, and several other staffers.

Lai, arrested twice already in 2020 for his opposition to Chinese communism, will now reportedly face charges under the “national security” law passed illegally through Beijing’s parliament in May. The law commands a minimum of ten years in prison for anyone found guilty of “terrorism,” “secessionist” crimes, enabling “foreign interference,” or “subverting” state power. As Lai is currently 72 years old, he faces spending the majority of the rest of his life behind bars.

Under Hong Kong’s Basic Law, the Communist Party does not have the power to enforce any laws passed through Beijing. Hong Kong Chief Executive Carrie Lam has nonetheless enforced the “national security” law on the grounds that it is meant to protect the Chinese homeland following the Hong Kong legislature failing to pass a controversial law last year that would have allowed police to extradite anyone present in the city into the secretive Chinese prison system. Lam has argued that this thus falls under exercises of sovereignty by China, which the Basic Law allows.

Critics have decried the mass arrests at Apple Daily as the death knell of a free media in Hong Kong. 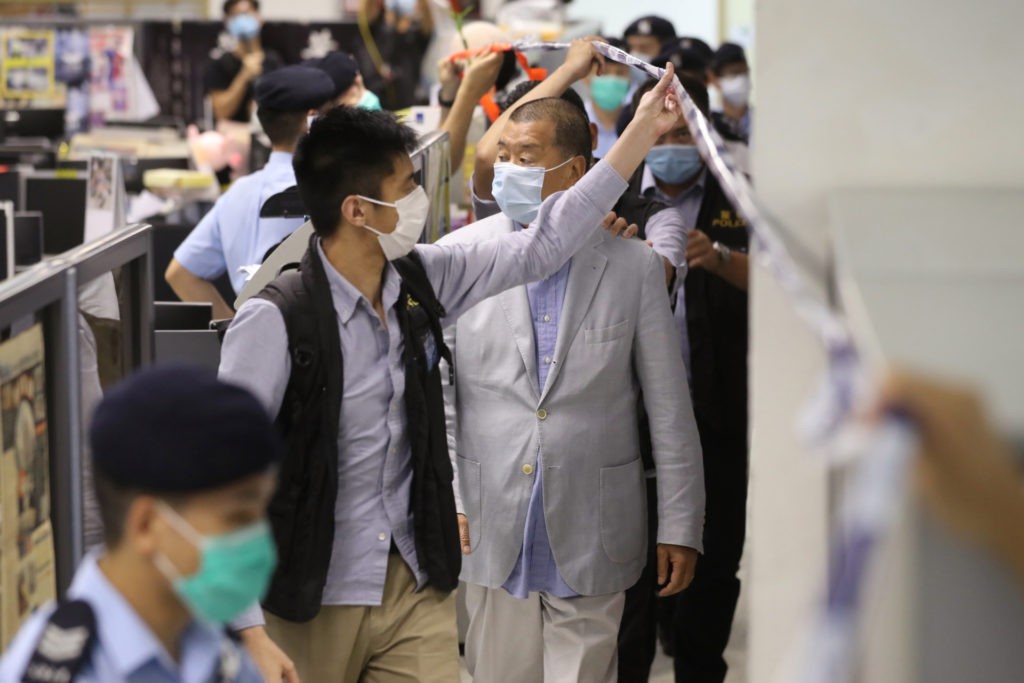 A handout from Apple Daily showing Hong Kong business tycoon Jimmy Lai led by police officers during a search at the headquarters of Apple Daily after Lai, was arrested at his home on August 10, 2020 in Hong Kong, China. Police officers raided the pro-democracy newspaper’s headquarter while leading Mr. Lai and the company’s chief executive, Cheung Kim-hung, through the offices in handcuffs. (Photo by Handout/Getty Images)

According to the local broadcaster RTHK, police arrested Lai first at his home before raiding the offices of Next Media, Apple Daily‘s parent company. Police reportedly stormed the scene insisting they had a warrant, but “a staff member then urged them to stop, saying it was unclear what the warrant is about.” At least one reporter confirmed that police never showed those in the office a warrant to confirm the legality of what they were doing. They then brought Lai to the offices while the raid was ongoing.

Apple Daily itself reported that Lai and sons Timothy and Ian were all facing charges of violating the “national security” law and that police accused Lai personally of cooperating with foreign powers to enable foreign interference. Police reportedly also raided Cafe Seasons, a business owned by Ian Lai.

“According to sources, Lai and his sons were arrested on suspicion of violating Article 29 of the national security law, which prohibits one from conspiring with a foreign country or an institution, organization or individual to wage a war, rig an election, disrupt the implementation of law and policies and provoke hatred among Hong Kong people toward the local and central governments by unlawful means,” Apple Daily noted.

The newspaper said that the raid on its headquarters had lasted six hours at the time of their last published update “with no signs of ending.” When it finally ended, Editor-in-Chief Ryan Law reportedly texted an RTHK reported, “business as usual.”

Law confirmed that police had stolen 25 boxes of documents from the offices of the newspaper. As reporters livestreamed the raid, many Hong Kong residents followed along, noting that police ordered dozens of officers to surround a bathroom at one point when Lai, who has been arrested multiple times and never attempted violence or resistance, requested to use one.

By Monday evening local time, Hong Kong police confirmed the arrests of ten people related to the raid. Police again insisted they showed those in the office a warrant and “asked people inside the building to cooperate with police in carrying out the warrant.”

The Global Times, a Chinese state propaganda outlet that has referred to Lai in the past as a “force of evil,” confirmed on Monday that his arrest was in response to charges related to the illegal “national security” law.

“Lai, the Hong Kong riot supporter, has been arrested for violating the national security law for Hong Kong for collusion with foreign powers, sources close to the Hong Kong Police Force confirmed with the Global Times on Monday morning,” the Global Times asserted. Chinese state media refer to all Hong Kong protests, including the peaceful majority of protests against communism in the past year, as “riots.”

“This was the first time the local media mogul, who is widely seen as a ‘modern traitor,’ was arrested for violating the law,” the Global Times reported, accusing Apple Daily of having “played a role of [sic] instigating hatred, spreading rumors and smearing Hong Kong authorities and the mainland [China] for years.”

Apple Daily published an official statement vowing, “we shall fight on.”

“Apple Daily is furious and hereby strongly condemns the operation,” the statement read. “The Hong Kong Police Force have blatantly bypassed the law and abused their power, despite claims about acting according to the rules.”

“In the face of these illegal, unreasonable and barbaric tactics, the staff of Apple Daily will stay fearless and continue speaking the truth amid persecution … Raiding a news institution is a severe attack on press freedom and should not be tolerated in a civilized society,” the statement read. “The regime believes that we will be silenced by intimidation and harassment, and that they can take an international city down the path of autocracy. Hong Kong’s press freedom is now hanging by a thread, but our staff will remain fully committed to our duty to defend the freedom of the press.”

The raid has triggered near-universal outrage from journalists around the world, with the exception being propagandists working for Chinese state newspapers. 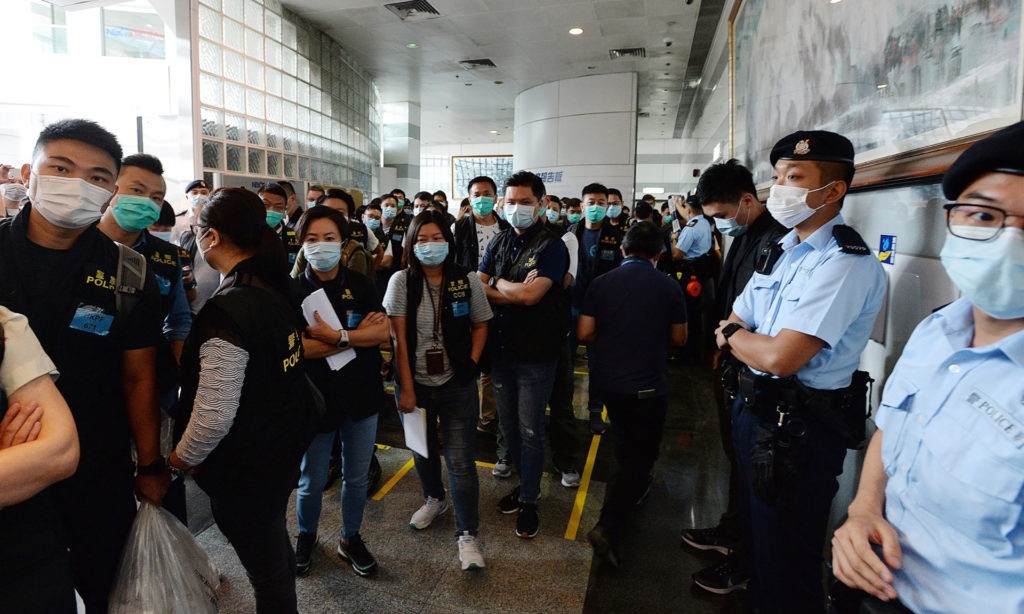 “I think you can say that is the day press freedom officially died,” the director of University of Hong Kong’s Journalism and Media Studies Centre, Keith Richburg, told RTHK. “It didn’t die a natural death. It was killed. It was killed by Beijing, Carrie Lam and Hong Kong police.”

Jimmy Lai was last arrested in April alongside several other prominent pro-democracy seniors for “illegal assembly,” a response to their presence last year in peaceful protests. Prior to that, Lai was arrested in February on similar charges related to his presence at a different protest than the one he was arrested in April for joining. Unnamed individuals attempted to firebomb his house in September, at the height of protests in the city.

Lai insisted in an interview in June that he would not leave Hong Kong, despite increased repression.

“Everything I have was given to me by Hong Kong. I won’t be leaving. I will advance or retreat with the people of Hong Kong,” Lai said, “There are a lot of Hong Kong people who are going to stay here. They will fight this to the end.”

“When the national security law comes, that will be the beginning of the end for Hong Kong. It won’t be like it used to be; there will be no more rule of law and no more freedom. People will feel as if they have to leave,” Lai predicted at the time. “No matter how much they love this place, there will be nothing they can do about the situation. Nobody should try to stop them.”