An estimated 10,000 people took the streets of Budapest, Hungary, this weekend to protest an agreement for the Chinese Communist Party to build a university campus in the capital city – prompting statements, reports noted on Monday, from government officials suggesting it may not go forward with the project.

The government of Hungarian Prime Minister Viktor Orban was the first European country to sign a deal with the Communist Party to join its Belt and Road Initiative (BRI), in which China offers predatory loans to developing nations in exchange for being paid to build ports, roads, and other large infrastructure projects. While not formally part of the BRI, the Orban government also agreed to allow China to build a foreign campus for its Fudan University in 1999. Officials claimed, after mounting outrage resulted in the formidable protest this weekend, that very little construction has occurred on the campus itself, allowing for a popular referendum to ask Hungarians to approve the project.

Reports suggest the Chinese university will cost about $1.8 billion, most of which will be paid by Hungarian taxpayers or the state through a loan from China.

The protest followed an announcement from Budapest Mayor Gergely Karacsony last week that the city would rename the streets surrounding the future Fudan University campus in honor of the victims of China’s many human rights atrocities. Among the new street signs are “Free Hong Kong road,” “Uyghur Martyrs’ road,” and “Dalai Lama road.” The Chinese Communist Party is currently undergoing a genocide campaign against the Uyghur ethnic group in western China, has exiled the Tibetan Buddhist leader for decades for opposing communism, and in the past year has imprisoned and attacked peaceful pro-democracy demonstrations throughout Hong Kong.

Political observers consider Karacsony, the leader of a major left-wing party in the country, one of Orban’s primary challengers to the prime ministership. Prior to welcoming the influence of the world’s largest Communist Party in his country, Orban had engaged in decades of anti-communist activism at home.
About 10,000 reportedly attended protests this weekend waving Hungarian flags and carrying signs protesting communist influence in the country. Among the slogans protesters marched with were “support Hungarian education” and “We will not be a Chinese colony!” 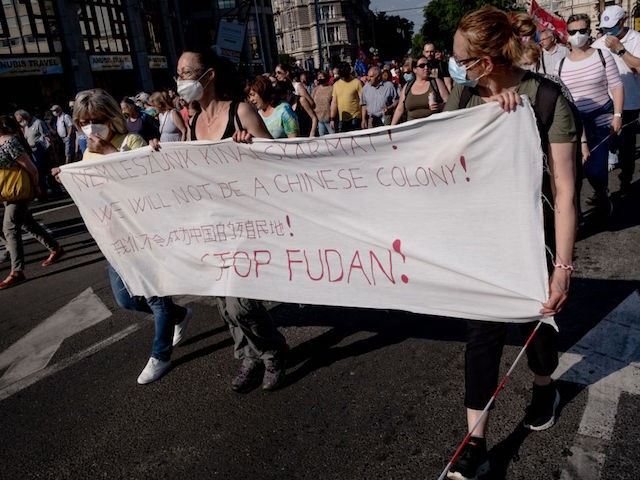 Protestors march during a demonstration against the planned Chinese Fudan University campus on June 5, 2021 in Budapest, Hungary. (Janos Kummer/Getty Images)

One person carried a sign that appeared to depict Orban and Chinese dictator Xi Jinping as a bride and groom (Orban is the bride). 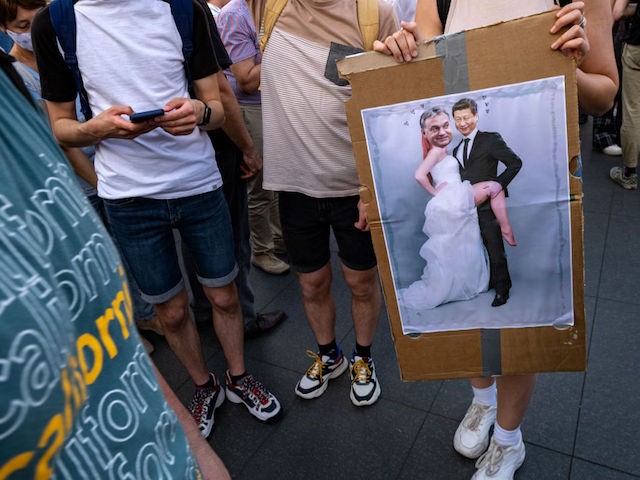 Protestors march with placards during a demonstration against the planned construction of the Chinese Fudan University campus on June 5, 2021 in Budapest, Hungary. (Janos Kummer/Getty Images)

Orban’s government appeared to respond to the protest on Sunday with an offer to give the Hungarian people a vote on the project.

“We support a referendum in Budapest to decide whether locals want Fudan University here,” Orban’s chief of state, Gergely Gulyas, told a local outlet on Sunday, according to a translation by Radio Free Europe/Radio Liberty (RFE/RL). Gulyas emphasized that the two governments had not done much planning or other preparation to build the university, implying the Hungarian government could easily walk out of the deal.

“We don’t want to do something ‘good’ against the will of the people, including the residents of Budapest,” Gulyas said, according to another translation by Bloomberg. “That’s why we support that, once the conditions of the investment are known, that Budapest voters decide whether they want a Fudan University.”

The chief of staff suggested the vote would occur possibly in 2023.

The Chinese Foreign Ministry reacted tepidly to the protests in Hungary.

“Transnational joint education programs, a common model of international educational cooperation nowadays, serves as an important platform to promote mutual understanding. It is in keeping with the trend of the times and the interests of all,” Foreign Ministry spokesman Wang Wenbin said on Monday. “We hope relevant individuals in Hungary will remain objective and rational, follow the science, and avoid politicizing or stigmatizing normal cultural and people-to-people exchanges with China to uphold overall friendly bilateral relations.”

The Chinese state-run Global Times publication defended both the plan and the Orban government – despite its anti-communist reputation – on Monday, dismissing the protest as a fabrication by the opposition “to stigmatize the cultural exchanges for political gain.”

“The reported suspension is perhaps a flexible move by the Viktor Orban government in response to the latest protest over the weekend and won’t fundamentally damage China-Hungary friendship,” the Global Times predicted, “despite some Hungarian opposition politicians who incited the protest by hyping so-called ‘Chinese human rights abuses’ to pave the way for competition against the incumbent Hungarian Prime Minister.”

The People’s Daily, the official newspaper of the Chinese Communist Party, published a feature on Tuesday promoting the Party’s cooperative agreements with Hungary as representative of the “well-received global public good” that the repressive regime can bring to the developing world.

“On May 27, Hungary inaugurated the country’s largest solar power plant, the 100-megawatt (MW) photovoltaic power plant project built by China National Machinery Import and Export Corporation (CMC) near the southwestern city of Kaposvar,” the People’s Daily narrated. “As a key project in the cooperation between China and Hungary under the framework of the Belt and Road Initiative (BRI) and a representative of a great number of BRI projects, the Kaposvar solar power plant has fully demonstrated the philosophy of peaceful cooperation and win-win results upheld by the BRI.”

“As a result of the active participation and support of various parties, the BRI has become the world’s largest platform for international cooperation and a well-received global public good,” the propaganda outlet concluded.