The Taliban’s top spokesman, Zabiullah Mujahid, insisted in an interview with the Kurdish outlet Rudaw on Thursday that the jihadist terrorist organization “will not be violent” when it eventually takes over governing Afghanistan.

Mujahid published an extensive Taliban press release on Friday morning urging Afghan residents not to flee Taliban control and vowing support for diplomats, businessmen, and even Afghan government officials who wish to defect to the terrorist group. The state appeared to directly address American concerns about the safety of personnel at the U.S. embassy in Kabul, which prompted the Pentagon to send 3,000 American troops back into the country to extract them.

President Joe Biden vowed to have all American troops out of Afghanistan by August 31, 2021.

Under predecessor Donald Trump, Washington brokered a deal with the Taliban that would have seen the American military presence in the country, which turned 20 years old this year, end on May 1, 2021. In exchange, the Taliban promised not to attack American troops and to cut ties with international jihadist organizations like al-Qaeda, whose attacks on America on September 11, 2001, prompted the Afghan War. Biden broke the deal, extending the military presence initially into September before cutting it back to August. 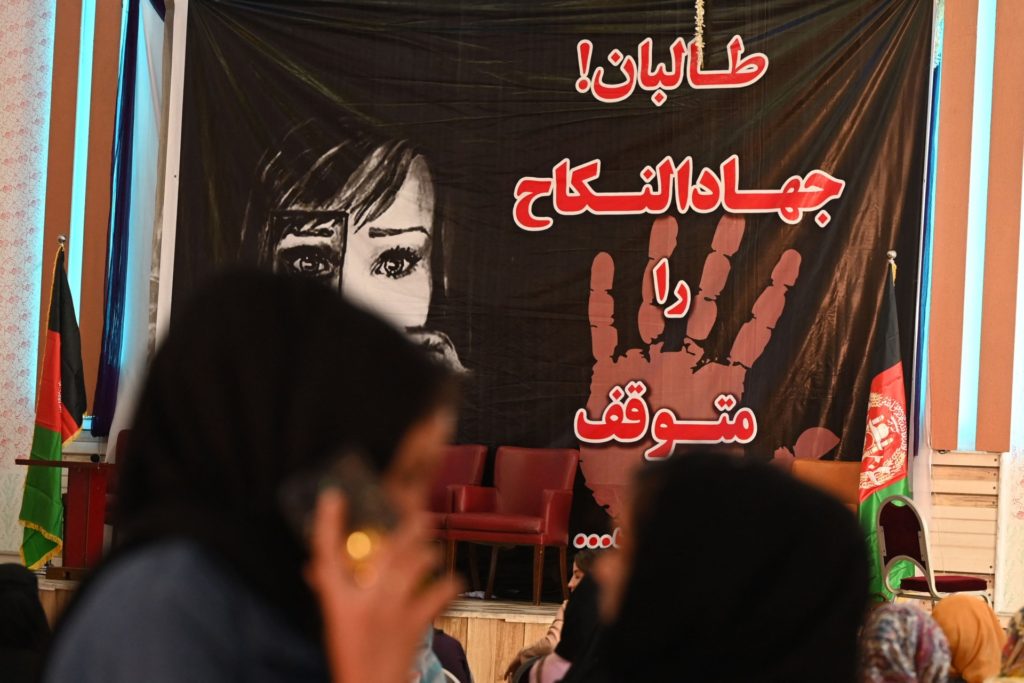 Afghan women gather in a hall in Kabul on August 2, 2021 against the human rights violations on women by the Taliban regime in Afghanistan. ((SAJJAD HUSSAIN/AFP via Getty Images)

Taliban officials took Biden’s disavowal of the agreement as a license to begin a campaign of conquest nationwide that has resulted in, according to Taliban officials, the group now controlling about 85 percent of the country. Taliban officials also falsely claimed they never agreed to cut ties with al-Qaeda.

Recent Taliban victories have prompted officials in the legitimate government of Afghanistan to flee the country and triggered a mass wave of internal displacement of civilians and, potentially, migration west.

In his interview with Rudaw, Mujahid, the Taliban spokesman, addressed videos of Taliban jihadists killing, torturing, and mutilating people that have surfaced in the past few months online. Rudaw specifically asked Mujahid if the Taliban would continue to oppress women. When the Taliban ruled Afghanistan prior to 2001, it imposed a strict and violent version of Islamic law, or sharia, that required women to wear full-body coverings (burqas) and disenfranchised them of most of their rights.

“No, you may have seen some scenes where we are holding weapons during fights. Of course, when someone is in a fight with the enemy, they will be violent with them,” Mujahid responded. “However, we will not be violent with our people.”

He insisted that the rapid takeover of 13 Afghan provinces was proof that the Taliban was popular and the speed showed that the takeovers involved minimal violence.

“People want us and they ask us to be with them. Everyone supports us, and we will give them all the rights specified in the Islamic sharia. We are committed to this,” Mujahid said. 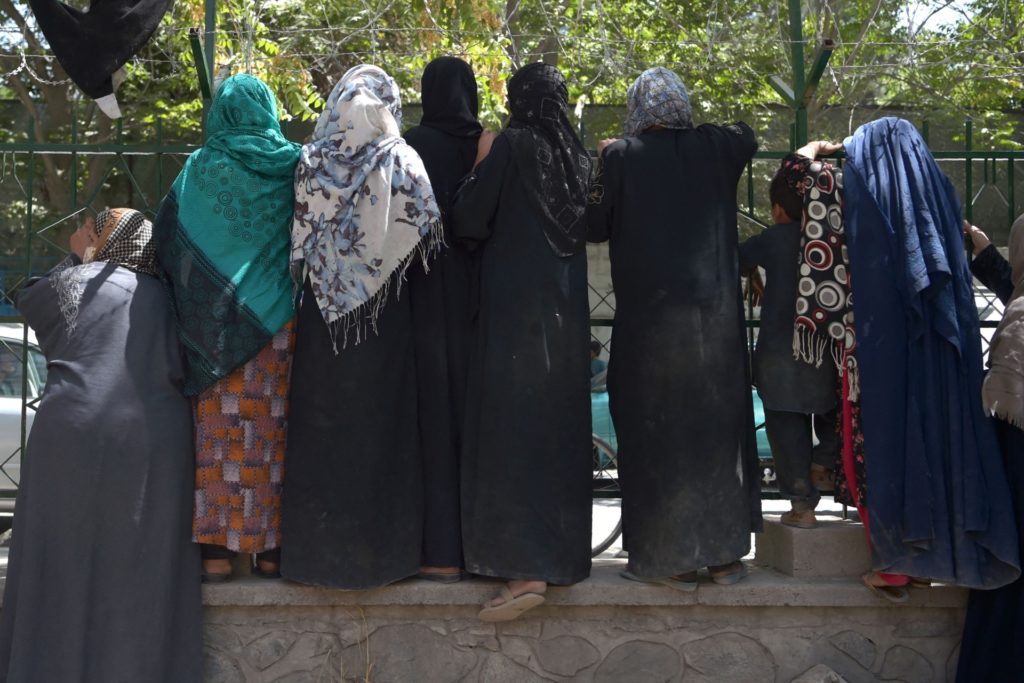 Internally displaced Afghan women, who fled from the northern province due to battle between Taliban and Afghan security forces, gather to receive free food being distributed by Shiite men at Shahr-e-Naw Park in Kabul on August 13, 2021. (WAKIL KOHSAR/AFP via Getty Images)

Mujahid did not note that the Taliban’s interpretation of the sharia has historically been extremely violent. Afghans who remember this, particularly women, have begun plans to flee the country and expressed terror at the return of Taliban rule. In territories recently conquered by the jihadist group, reports of mass abductions of young girls to be forced into marriages with jihadis have already begun.

“[T]he Taliban are going door-to-door in some areas, compiling lists of women and girls aged between 12 and 45 years for their fighters to forcibly marry,” Bloomberg reported last week. Multiple reports from other news agencies with resources in the country have similarly corroborated stories of the Taliban tasking local imams with finding the young girls in every neighborhood and abducting them for marriage.

In an incident that particularly outraged Afghans, Taliban thugs captured and tortured a popular comedian, Nazar Mohammad, and filmed themselves mocking and insulting him in custody shortly before his murder. They later hung his body from a tree.

The incident caused so much popular outrage that the Taliban sent Mujahid to do public relations cleanup. Mujahid claimed the murder was an “interrogation” gone wrong and that the Taliban would punish his killers for not bringing him to a proper sharia court.

The Taliban statement issued Friday morning, published on Mujahid’s official Twitter account, appeared to be an assurance to the world that the Taliban was now the official government of Afghanistan – or would be soon enough that it needed to mend fences with its neighbors diplomatically.

“We reassure all our neighbors that we will not cause them any problems, that they can have full confidence [in us],” the statement read in part. “We also assure everyone that diplomats and staff of embassies, consulates, and institutions, whether foreign or domestic, will not only be safe from the Islamic Emirate [the Taliban], but will also be provided with an atmosphere of security and trust. Inshallah [Allah willing].”

The latter appeared to be a reference to the Pentagon sending 3,000 troops back into Afghanistan this week to help evacuate the U.S. embassy in Kabul. 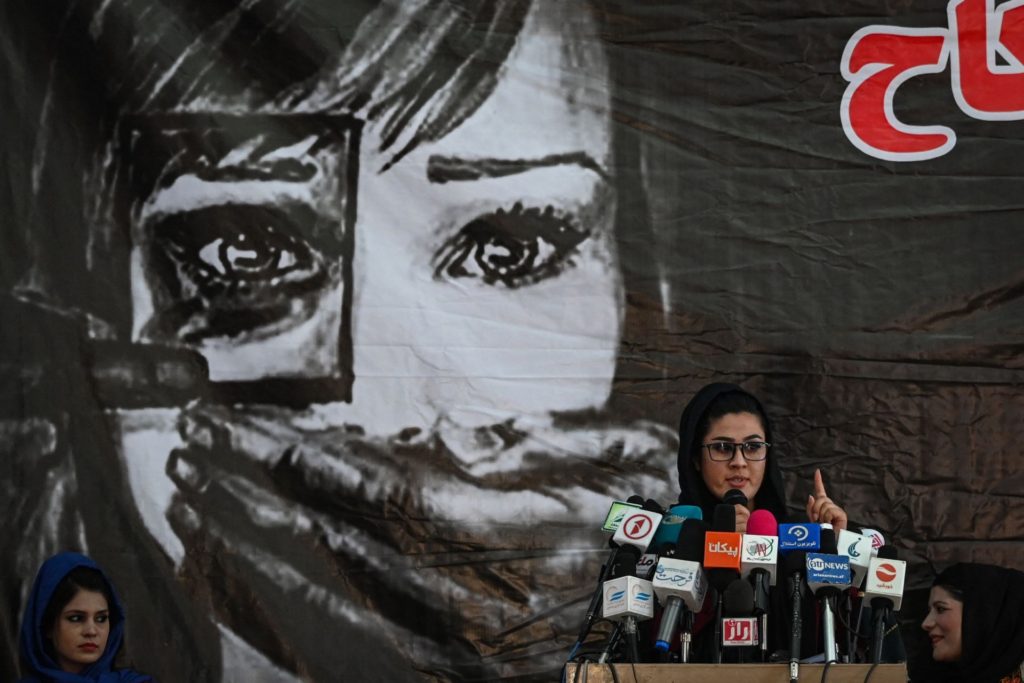 A social worker address the Afghan women gathered at a hall in Kabul on August 2, 2021 against the human rights violations on women by the Taliban regime in Afghanistan. (SAJJAD HUSSAIN/AFP via Getty Images)

The Taliban missive also belied concerns of “brain drain” – mass emigration of the most highly educated in the country – and loss of investment that could doom a Taliban regime economically. To that end, the Taliban implored Afghans not to leave the country and demanded that its own jihadis not wantonly attack core government institutions.

“Our message to businessmen, industrialists and capitalists is to carry out their work normally and serve their people,” the statement read in part. “The Islamic Emirate creates a suitable environment for their business and, to this end, it will not hesitate to do everything in its power.”

“In areas under the control of the Islamic Emirate, people should lead a normal life, especially in official circles; Whether they are educational, or health, or social and cultural. No one should think of leaving their region and country. Our country and nation need your services,” it continued. “The Islamic Emirate of Afghanistan does not deal with anyone’s personal property and does not intend to own anyone’s cars, lands, houses, markets and shops, but considers it its responsibility to protect the lives, property and reputation of the people.”