Taliban terrorists announced Sunday that their leaders would organize a “committee” to “address media problems in Kabul,” an apparent response to widespread evidence of violence and persecution of journalists following the Taliban’s takeover of the country.

Journalists based in Kabul and other major Afghan cities have reported persecution for the past week including door-to-door raids, invasions of media offices, and attacks on the relatives of known reporters. Women journalists have faced particular danger; some have reported Taliban jihadists banning them from going to their offices and doing their jobs.

Taliban representatives have repeatedly claimed the jihadist terrorist group would allow reporters to do their jobs in peace in exchange for journalists respecting their “Islamic” values. In an extended press conference last week, spokesman Zabihullah Mujahid made an exception for women journalists, telling reporters to wait for the Taliban to establish a formal government bureaucracy that would decide the fate of women in media. 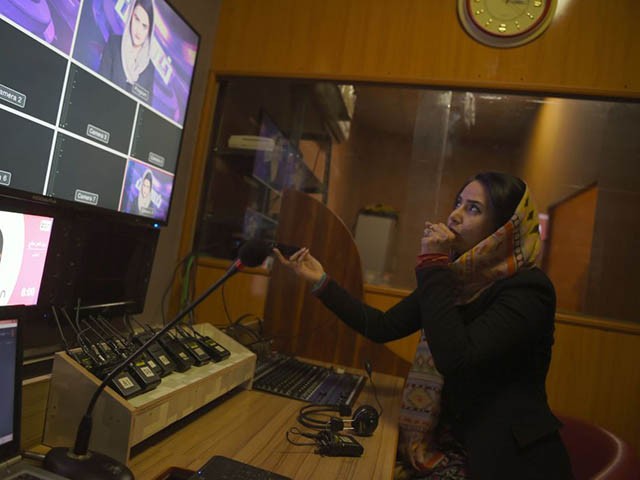 In this photo taken on February 18, 2019, Afghan journalist Salma Sakhi, 27, works in the control room during a news broadcast for Zan TV (Women’s TV) in Kabul. – Afghanistan’s population — estimated at 35 million — is overwhelmingly young, with 63.7 percent under the age of 25. Millions have grown up in cities, swollen by refugees during the years of fighting. (Photo by WAKIL KOHSAR / AFP) / To go with AFGHANISTAN-YOUTH-TALIBAN-CONFLICT-TALKS,FOCUS by Usman SHARIFI (Photo credit should read WAKIL KOHSAR/AFP via Getty Images)

Another spokesman, Suhail Shaheen, announced the creation of the media “committee” on Monday.

A three-members committee has been set up in Kabul to reassure media.
A member of the Cultural Commission, a member of the Union of Journalists and media outlets and a member of the Kabul Police Dept will participate as members.
They will address media problems in Kabul.

Mujahid told reporters that the committee will specifically investigate allegations that Taliban jihadists have attacked journalists in the capital, according to Afghan network Tolo News.

“In order to prevent violence and harassment against journalists, we announce the formation of three-member committee,” Mujahid reportedly said.

The Taliban announced a complete takeover of Afghanistan on Sunday, August 15, after surrounding Kabul. The jihadist organization, once the formal government of Afghanistan prior to the American invasion of the country in 2001, launched a campaign to overthrow the U.S.-backed Afghan government in April in response to President Joe Biden breaking a political deal between Washington and the Taliban brokered under predecessor Donald Trump. Trump had implemented a plan to withdraw all American troops from the country by May 1; Biden changed the deadline first to September 11 — the 20th anniversary of the al-Qaeda jihadist attacks — and then to August 31. Biden has since signaled he cannot guarantee he will stick to the August 31 deadline.

The Afghan State Ministry for Peace documented 22,000 Taliban attacks between April, when Biden announced he would not honor the deal, and July, resulting in sweeping territorial gains for the jihadist organization. By August 15, the Taliban had reached the city limits of Kabul, prompting former President Ashraf Ghani to flee.

Taliban officials responded to Biden’s reservations about meeting his own August 31 deadline on Monday, warning that both America and any allies that remained in Afghanistan would suffer “consequences” for not leaving. Biden had suggested a possible extension of the military withdrawal deadline in response to deadly violence at Kabul’s international airport, the product of thousands of people attempting rapidly flee the country fearing Taliban retribution. Taliban officials have denied that stampeding towards the airport was a result of fear of the Taliban, calling it instead “economic” migration.

Khadija Amin the new anchor on state TV last week.
Taliban taking over her seat as of Monday.
Ms. Amin told us her boss informed her Taliban have banned women from returning to work at state television.#Afghanistan pic.twitter.com/S4BfISKkaG

Outlets like Tolo News reported that Taliban jihadists had entered their offices, looking to confiscate weapons and claiming to be there to ensure “security.” Multiple outlets reported door-to-door raids. The German broadcaster Deutsche Welle confirmed last week that Taliban jihadists had killed a relation of one of its journalists during such a raid, looking for the reporter. The reporter in question, who the outlet did not identify, is reportedly in Germany.

“It is evident that the Taliban are already carrying out organized searches for journalists, both in Kabul and in the provinces. We are running out of time!” Deutsche Welle director-general Peter Limbourg said.

Women working for Afghan news outlets reported terrorists not allowing them into their own offices.

“I wanted to return to work, but unfortunately they did not allow me to work,” Shabnam Khan Dawran, a news anchor for Radio Television Afghanistan (RTA), said last week. “They told me that the regime has changed and you cannot work.”

Dawran reported that Taliban thugs were making door-to-door visits banning civilian women in general, not just journalists, from doing their jobs. Another journalist speaking to Tolo and identifying only has “Khadija” said that Taliban representatives had banned women from appearing on television. Other reports suggested Taliban terrorists had implemented restrictions that prevented the broadcast of women and girls’ voices in addition to any music.

According to Reporters Without Borders, over 100 media outlets ceased operations in Afghanistan between August 15 and August 17.

Tolo News reported on Monday, in tandem with the announcement of the new “committee” to investigate violence against journalists, that Taliban jihadists had stormed the home of the director of a local television station in Kabul “and took his vehicle and other equipment and threatened his life” on Friday. Taliban representatives claimed they were “investigating” the issue.

Zabihullah Mujahid, one of the Taliban’s top spokesman, said at his first-ever press conference last week that the new regime would respect media “within our cultural frameworks.”

“Private media can continue to be free and independent, they can continue their activities – with some requests for the media,” he specified. “One, is that Islam is a very important value in our country and nothing should be against Islamic values. … It’s very important that the Afghans are giving a lot of importance to their national values, national unity, national consensus. The media should not work against these national values, against national unity.”

Asked about the rights of women journalists, Mujahid said, “just wait and see what the future government is going to say.” 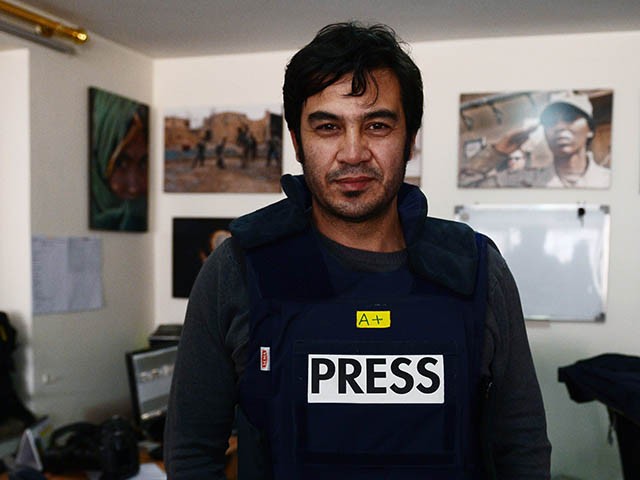 In this picture taken on March 20, 2014, Sardar Ahmad, 40, a Kabul based staff reporter at the Agence France-Presse (AFP) news agency poses for a photo at the AFP office in Kabul hours before he, his wife and two of his three children were gunned down when four teenage gunmen attacked Kabul’s Serena hotel. An AFP staff photographer identified the four bodies at a city hospital and said the family’s youngest son was undergoing emergency treatment after being badly wounded in the attack. AFP PHOTO / WAKIL KOHSAR (Photo credit should read WAKIL KOHSAR/AFP via Getty Images)

In a later conversation with Reporters Without Borders, Mujahid said the Taliban needed journalists to “‘break’ the climate of fear currently reigning in the country” and considered them “talented young people who constitute our richness. There will be no threat against them.”