A female Afghan journalist denounced Thursday that, despite assurances to the international community that they would allow women to work, Taliban jihadists are banning women from leaving their homes in Kabul and personally banned her from doing her job.

Radio Television Afghanistan (RTA) anchor Shabnam Khan Dawran denounced the jihadist regime, in power since its takeover of Kabul on Sunday, for denying her access to the RTA headquarters on the grounds that she is a woman.

“I wanted to return to work, but unfortunately they did not allow me to work. They told me that the regime has changed and you cannot work,” said Dawran said, according to Afghan cable news network Tolo News, where Dawran once worked.

Taliban didn't allow my ex-colleague here in @TOLOnews and famous anchor of the State-owned @rtapashto Shabnam Dawran to start her work today.
" Despite wearing a hijab & carrying correct ID, I was told by Taliban: The regime has changed. Go home"#Afghanistan #Talban pic.twitter.com/rXK7LWvddX

The Taliban also appear to have taken over RTA’s television broadcast, replacing its regular programming with radical Islamist propaganda. An RTA journalist identified as “Khadija” confirmed the move to Tolo.

Dawran appears to have responded to the ban by going on a tour of Indian media, contacting multiple Indian news networks via phone to denounce the Taliban for banning her from her job. In an interview with India’s Times Now, she stated that the crackdown was not limited to female journalists, but women in general.

The Taliban, she said “are imposing their strict rules in Afghanistan. Women are not allowed to do outdoor activities.”

Reports from Kabul indicate that the streets are largely devoid of women, though it remains unclear if women are staying home out of fear, actively being trapping in their homes, or a mixture of both. Taliban jihadis have vandalized the many images of women’s faces throughout the capital in advertisements and billboards, which women have taken as a clear threat to their wellbeing. 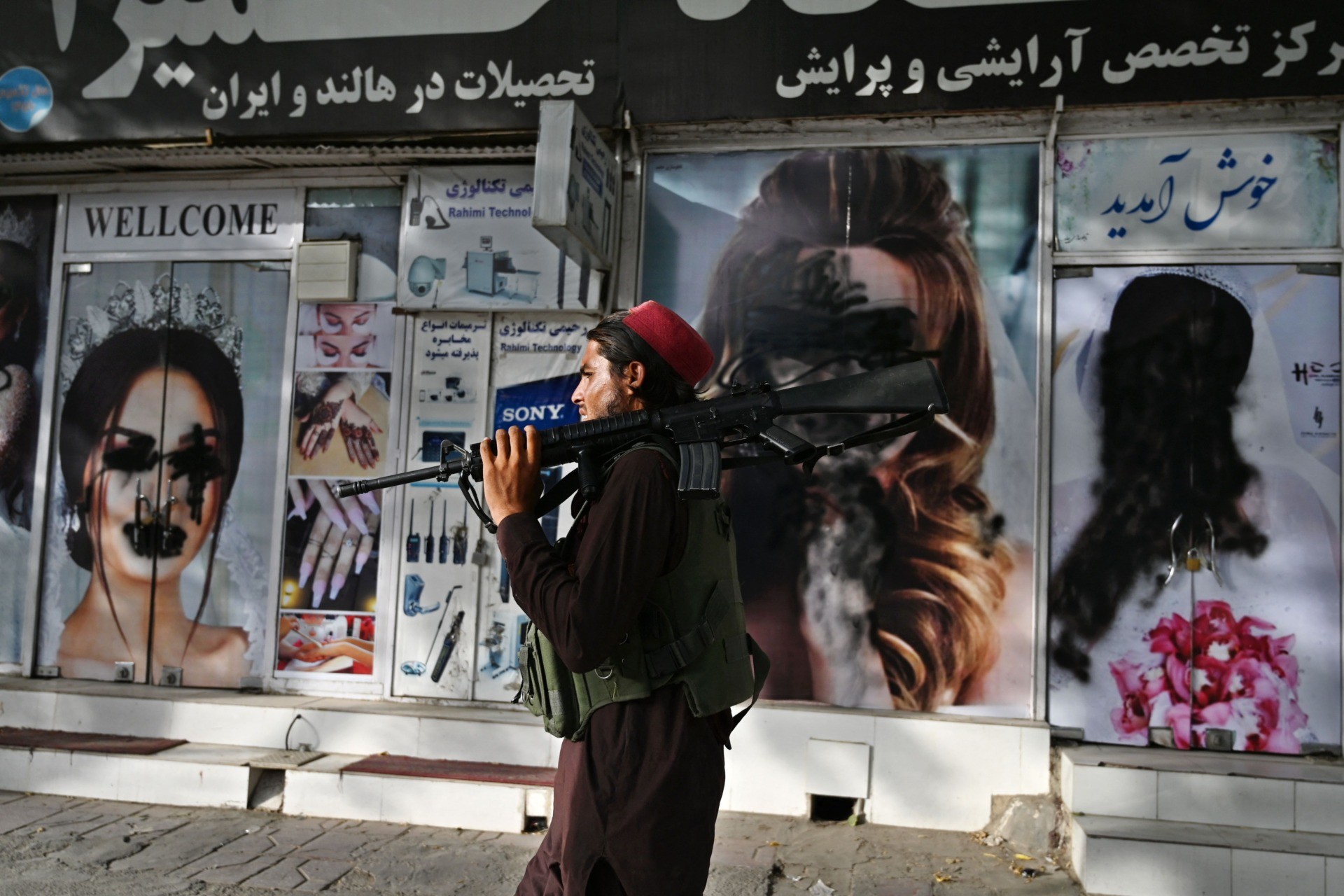 A Taliban fighter walks past a beauty salon with images of women defaced using spray paint in Shar-e-Naw in Kabul on August 18, 2021. (WAKIL KOHSAR/AFP via Getty Images)

Dawran’s testimony contradicts the many assurances from Taliban spokesmen since their ascent to power in the capital this weekend that they would respect women’s rights – though always caveated as only those rights granted by the Taliban’s interpretation of sharia, or the Islamic law. During a press conference designed for an international audience Tuesday, spokesman Zabihullah Mujahid addressed women’s rights on several occasions, and in one case took a question from a woman journalist.

“The issue of women is very important. The Islamic Emirate is committed to the rights of women within the framework of Sharia. Our sisters, our men have the same rights; they will be able to benefit from their rights,” Mujahid claimed. “They are going to be working with us, shoulder to shoulder with us. The international community, if they have concerns, we would like to assure them that there’s not going to be any discrimination against women, but of course within the frameworks that we have.”

When asked directly about women’s rights in practicing journalism, Mujahid was less clear.

“Just wait and see what the future government is going to say,” he responded. “Our laws, when it comes to media and other essentials are going to be such that everybody should be able to work but within the framework of the Islamic Sharia laws.”

Widespread reports from Kabul indicate that the Taliban is persecuting both men and women in journalism. Tolo News itself reported a visit from Taliban “inspectors” Monday, who confiscated all weapons on the premises and claimed they were there to “keep the compound safe.”

The German media organization Deutsche Welle denounced the Taliban for home invasions against at least three of its journalists in Afghanistan and the murder of a relative of another.

“The Taliban have raided the homes of at least three DW journalists, Nematullah Hemat of the private television station Ghargasht TV is believed to have been kidnapped by the Taliban,” the outlet reported, “and Toofan Omar, the head of the private radio station Paktia Ghag Radio, was, according to government officials, targeted and shot dead by Taliban fighters.”

Taliban jihadists have also harassed CNN journalist Clarissa Ward, reporting from Kabul. She has managed to continue conducting journalism at press time, asserting Taliban leaders have granted CNN special permissions, but expressed concerns that these may soon be revoked.

Shots ring out behind @clarissaward – as she stands less than 200 yards from the entrance of the Kabul airport.

“Members of the Afghanistan Islamic Emirate [the formal name for the Taliban] have announced the curfew in every mosque of Kabul and have shared their contact numbers in case people need help after the banned time,” Khaama reported. “The members have also been busy arresting thieves in the city and are punishing them differently which has been appreciated by the citizens.”

Khaama also noted that the Taliban have not announced a reinstatement of the strict dress code that existed when it last controlled the country in 2001, which bans “wearing jeans by boys and girls.” They have also not banned music, but Afghans are notably abstaining from listening to music anyway out of fear.