A senior Taliban spokesman told the U.K.’s Sky News on Monday that the United States and its ally Britain will face “consequences” if they seek to extend their military presence in Afghanistan to ensure the safe evacuation of their citizens.

American President Joe Biden announced this summer that he would withdraw all American troops from the country by August 31. Biden had previously announced in April that the withdrawal would end on September 11, the 20th anniversary of the jihadist attacks that prompted the Afghan War. Both dates were a significant extension of the war from the set withdrawal date under former President Donald Trump, who brokered a deal with the Taliban that would have seen a full American military exit by May 1.

The Taliban followed Biden’s extension of the war – and his choice to break the agreement Trump brokered with the jihadist organization – with a nationwide campaign to overthrow the now-former government of Afghanistan. The campaign culminated with Taliban terrorists surrounding the country’s capital, Kabul, on August 15, prompting former President Ashraf Ghani to abruptly flee the country. 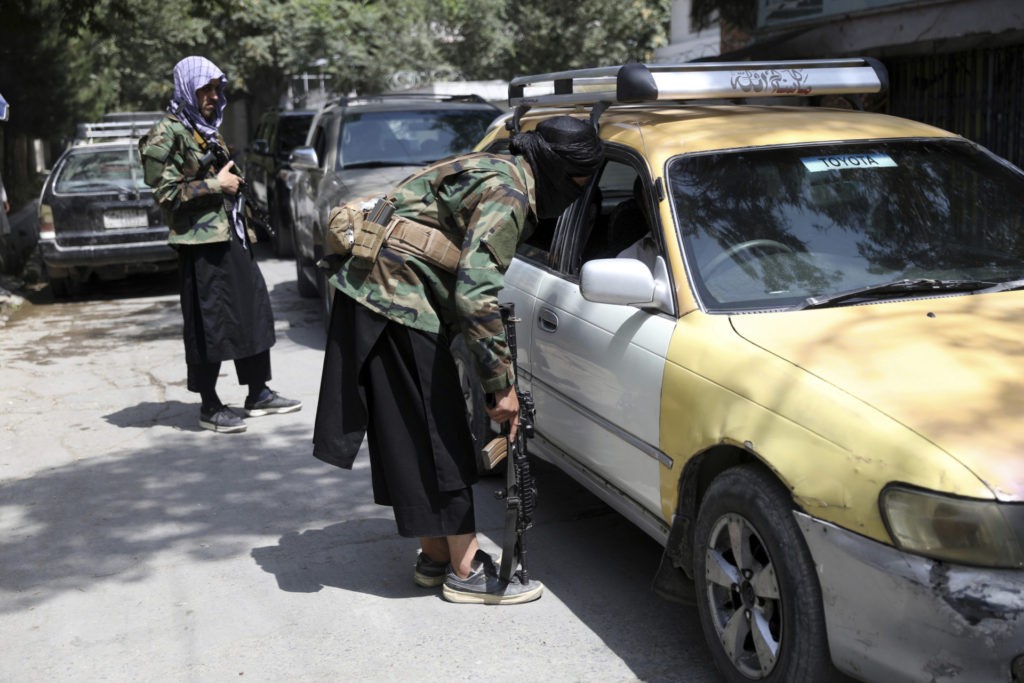 Taliban fighters search a vehicle at a checkpoint on the road in the Wazir Akbar Khan neighborhood in the city of Kabul, Afghanistan, Sunday, Aug. 22, 2021. (AP Photo/Rahmat Gul)

Taliban leaders now control nearly all of Afghanistan, excepting a small pocket of resistance in north-central Panjsher province, which the jihadists claimed on Monday they had surrounded and would soon control.

Taliban spokesman Suhail Shaheen discussed the current situation in Kabul – where thousands are attempting to reach the airport to avoid being under Taliban rule – with the U.K.’s Sky News, denying that the crowds feared for their safety under the radical Islamist terrorist group. The desperation to flee Taliban rule has prompted multiple deaths in and around the Kabul airport resulting from stampedes and deliberate violence. Eyewitnesses have also reported extensive violence against civilians on the part of Taliban thugs outside the airport, reports the Pentagon confirmed last week.

Shaheen appeared to use the unsubstantiated claim that the Kabul airport chaos did not result from any fear of the Taliban to support the Taliban’s resistance to foreign forces staying in the country to help civilians flee.

The August 31 deadline, Shaheen said, was a “red line.”

“President Biden announced that on 31 August they would withdraw all their military forces. So if they extend it that means they are extending occupation while there is no need for that,” Shaheen said. “If the US or UK were to seek additional time to continue evacuations – the answer is no. Or there would be consequences. It will create mistrust between us. If they are intent on continuing the occupation it will provoke a reaction.”

Shaheen did not elaborate on what consequences Western soldiers would face in the event that their leader ordered them to remain in the country. In April, following Biden’s announcement he would break the deal, the Taliban organization published an official statement vowing “every necessary countermeasure” against the United States for violating the agreement, suggesting attacks on American troops. In practice, the Taliban limited such attacks but instead placed all its focus on forcing the Afghan government out of every corner of the country, including northern regions it never controlled while ruling Afghanistan prior to the 2001 invasion. 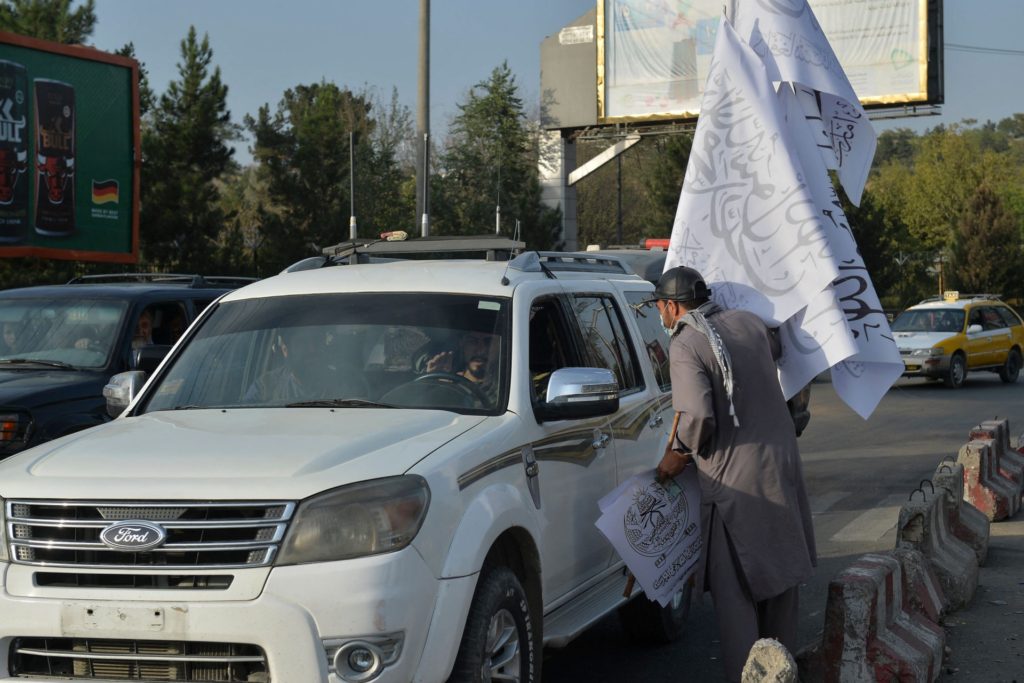 A man carries Taliban flags to sell in the Karte Mamorin area of Kabul on August 22, 2021. (HOSHANG HASHIMI/AFP via Getty Images)

According to Afghanistan’s State Ministry for Peace, the Taliban launched 22,000 attacks on the Afghan National Defense and Security Forces (ANDSF), the national military, between April and July.

Biden suggested in an interview with ABC News’ George Stephanopoulos last week that he would consider extending America’s military presence in Afghanistan beyond the August 31 deadline. Biden ordered 6,000 troops into the country in the immediate aftermath of the Taliban takeover; about 2,500 American troops were present in the country at the end of the Trump administration.

Biden responded “yes” when Stephanopoulos asked if he was “committed to making sure that the troops stay until every American who wants to be out is out,” which may occur after August 31.

“The commitment holds to get everyone out that, in fact, we can get out and everyone that should come out,” Biden elaborated, including not just Americans but Afghan nationals who aided the U.S. government, “and that’s the objective. That’s what we’re doing now. That’s the path we’re on. And I think we’ll get there.”

Asked directly if Americans should expect to see their soldiers in Afghanistan past the withdrawal day, Biden said “no.”

On Monday, Shaheen dismissed the necessity of American or British troops staying in the country to support evacuations, arguing that the Taliban’s repeated promises it would not target Afghan collaborators with the West or foreign civilians were enough to calm the general population.

“I assure you it is not about being worried or scared,” Shaheen told Sky News about the thousands attempting to flee Kabul. “[T]hat is a kind of economic migration because Afghanistan is a poor country and 70 percent of the people of Afghanistan live under the line of poverty so everyone wants to resettle in Western countries to have a prosperous life. It is not about [being] scared.” 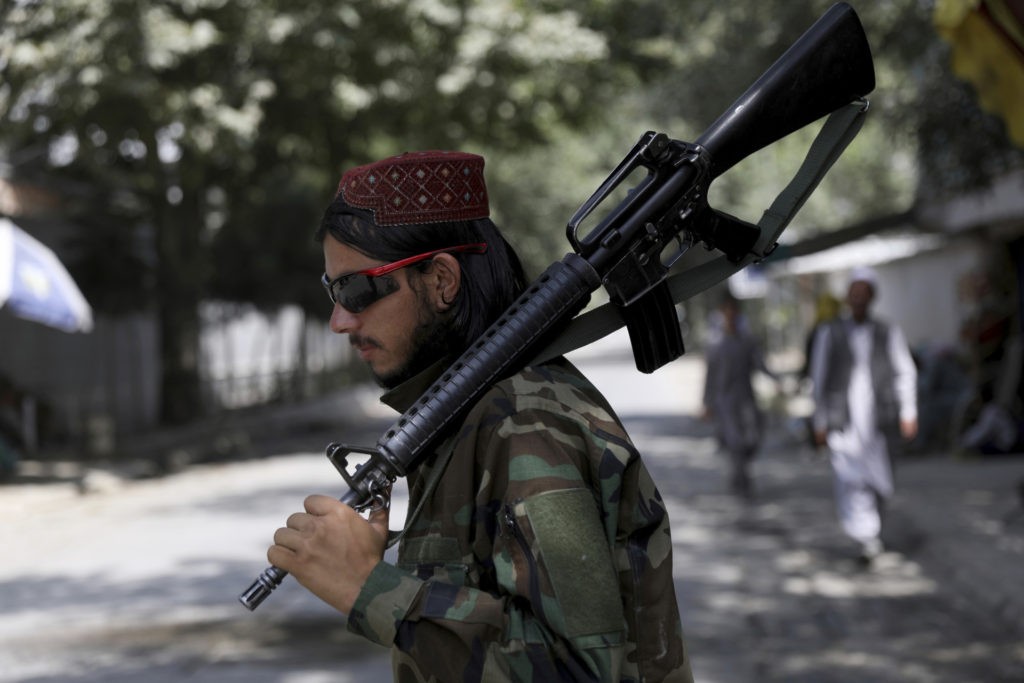 Shaheen dismissed all video, eyewitness, and other extensive evidence of Taliban jihadis threatening, and sometimes attacking, people believed to have worked with either the former Afghan government or the United States as “fake news.” On women’s rights, he claimed, “women are required to have the same rights as you have in your country [the United Kingdom] but with a hijab.”

The past Taliban rule required women to wear burqas, a full-body covering that does not show eyes. A hijab is a headscarf that covers hair.

Women journalists in Afghanistan have vocally protested that Shaheen’s claim is false.

“I wanted to return to work, but unfortunately they did not allow me to work. They told me that the regime has changed and you cannot work,” Shabnam Khan Dawran, an anchor for Radio Television Afghanistan (RTA), said last week. Beyond banning women from working, Dawran and other professional women in the country have denounced Taliban jihadists preventing women from leaving their homes at all.